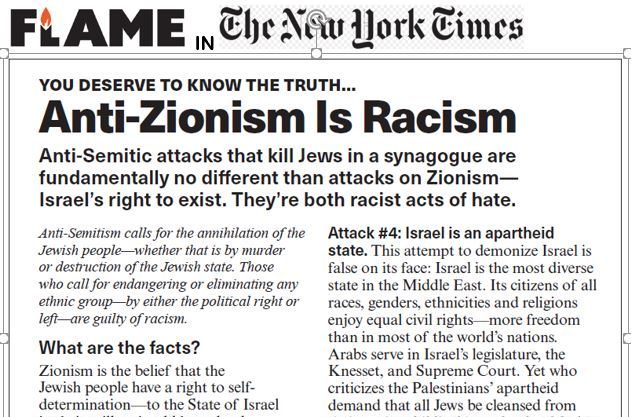 Despite vicious attacks on Israel by the media, the U.N. and Islamists, we continue to win!

It’s the season to celebrate—and to keep fighting back.

Won’t you act now to help us tell the truth about Israel in mainstream media? Just go to donate now to contribute.

It is indeed the best of times and the worst of times for Israel and those of us who support the Jewish state.

As we complete our Chanukah celebrations and Christmas is upon us, we can take pleasure in having won many battles for Israel over the past year. Here are some great reasons you and I—and FLAME—deserve to raise a glass to Israel:

L’chaim! We can celebrate these wins, of course, thanks to work by FLAME—and pro-Israel supporters like you and me—nationwide. Our work truly pays off.

Won’t you help multiply this power that FLAME lends to Israel? Won’t you help us keep publishing our hasbarah—PR for Israel—in mainstream media? Please make your year-end donation now.

Above all, we must not forget: We’ve won battles, but not the war. These are also the worst of times for Israel, and the hard edge of history demands that we redouble our efforts to achieve victory:

On the one hand we feel joy as we celebrate our victories for Israel and our deepest spiritual beliefs.

On the other hand, as a pro-Israel advocate, it makes me fighting mad at the media, the BDS haters, the U.N. and the Islamists who would decimate the Jewish state.

I also feel deep frustration and fear at how European states, the U.N. and media like the New York Times have responded to Mr. Trump’s Jerusalem declaration—denying Israel’s rights to its own state and sovereignty.

Speaking of the New York Times, I hope you saw FLAME’s outspoken editorial—”Anti-Zionism Is Racism“—in this week’s Sunday Review section of the Times. I also hope you agree that this is a critical topic and a wise investment. (Click on the title to review it online.)

So back to my question: How can you and I channel our anger in a way that makes sense—and makes a difference—during this season of gratitude and good cheer?

I have an answer, and it’s why I’ve dedicated myself to FLAME. As you know, FLAME has spoken out against the lies about Israel, from BDS, the U.N., Iran and the Palestinians for decades.

Won’t you give voice to your love of Israel through a membership donation to FLAME during this year-end giving season?

With your help, FLAME has told the truth about Jerusalem, Jewish history in the Holy Land and the inestimable political and spiritual value of Israel to the United States.

In 2018, with help from members like you, we’ve published the following outspoken messages in mainstream media to millions of readers in support of Israel, which I invite you to review by clicking on them:

Second, you can celebrate the season’s holidays with even more joy in your heart, because you have done a mitzvah for Israel—a generous good deed appropriate to the season.

Won’t you act now to start or renew your membership online? Just go to donate now.