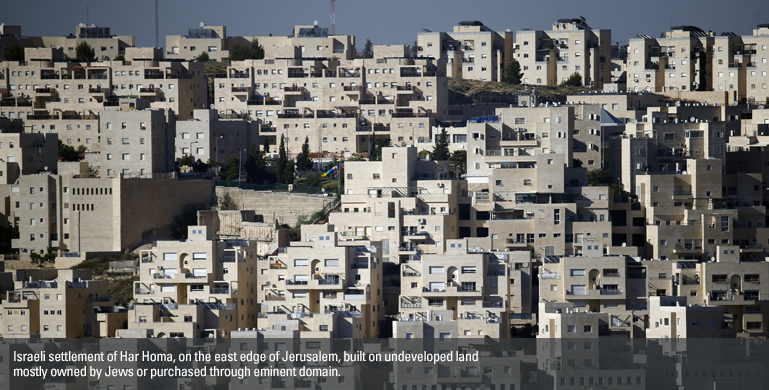 Arabs opposed the State of Israel before there were settlements—and they oppose it still today. It’s time to clear up 5 false myths about settlements.

The U.N., as well as some American media and politicians, claim Israel doesn’t want peace, since Jews build houses in disputed territories of Judea and Samaria (a.k.a, the West Bank). But the facts reveal settlements to be a smokescreen. Other, much greater obstacles are preventing peace.

“Israel has created no new settlements in some 20 years.”

Palestinian Arabs have violently fought Israel’s existence since the Jewish state’s founding and only much later cited Israel’s settlements as an obstacle to peace. When Israel relinquished its settlements in Gaza in 2005, it was rewarded with a murderous war by the Palestinian terrorist group Hamas. Five major misconceptions underlie criticism of Israeli settlements.

Myth #1: Palestinians “own” these lands. In fact, Jews are indisputably the indigenous people of Palestine (including Israel, Judea and Samaria), who have lived in this region for millennia and ruled it as a state, predating Arab settlement by 1,600 years. Palestinians have never had a state nor possessed public land in this region. Thus, the idea of “Palestinian lands” is false. In fact, both peoples can lay claim to Judea and Samaria (the West Bank): It is disputed territory.

Myth #2: Jews have no right to live in the disputed territories. Jews and Arabs have lived together for hundreds of years in Palestine. The only exception is during 19 years of Jordanian rule, when Jews were exiled from the West Bank. Today, some two million Arabs live as full citizens of Israel, and some 400,000 Jews live in Judea and Samaria. Yet Palestinians insist that no peace with Israel is possible so long as Jews live among them. In 2013, Palestinian president Mahmoud Abbas stated that “in the final resolution, we would not see the presence of a single Israeli—civilian or soldier— on our lands.” Why should Abbas, who accuses Israel of “apartheid,” issue a racist ban of Jews? Why should Arabs be welcome in Israeli society—as they are—when Jews would be forbidden from living with Palestinians in the West Bank?

Myth #3: Israel is increasing new settlements in Judea and Samaria. In December 2016, President Obama’s deputy national security advisor Ben Rhodes complained to PBS’s Judy Woodruff of “tens of thousands of settlements being constructed” by Israel. In fact no new settlements are under construction in Israel, and Israel has created no new settlements in some 20 years. The number of settlements, plus illegal outposts, now totals just 228. While the number of settlers in living in established settlements has increased by 355,000 since 1993, the number of settlers living east of Israel’s anti-terrorism separation barrier has since 2009 increased by only 20,000—less than 1% of the population in the disputed territories. Today, Israeli communities take up only 2% of the land of the West Bank. Almost all the settlements are located on land not previously occupied, used or privately owned by individual Palestinians.

Myth #4: Israel’s settlements are illegal under international law. Most who assert Israeli settlements are illegal cite the Fourth Geneva Convention, which states “The Occupying Power shall not deport or transfer parts of its own civilian population into the territory it occupies.” However, Russia has settled its people into the Baltic region, Turkey has settled Turks into Turkish-occupied Cyprus; and China has settled Chinese into occupied Tibet. But Israel has never transferred any of its people into the West Bank. All settlement in Judea and Samaria has been voluntary, undertaken by private Israeli citizens. Why does the world focus on Israel—which has not broken this law—while allowing other nations to violate it blatantly?

Myth #5: The Palestinians would make peace if settlement building stopped. In 2009, Israel froze new settlement activity for 10 months to entice the Palestinians to negotiations sponsored by the U.S. The Palestinians refused. Indeed, Israel has made numerous land-for-peace offers to the Palestinians, most recently in 2000 and in 2008, in which the Palestinians would have received more than 90 percent of the disputed territories (plus land swaps)—plus a capital in Jerusalem . . . but the Arabs turned them down. They refuse to accept Israel as a Jewish state and insist on “rights” of five million descendants of Arab refugees from 1948 to “resettle” in Israel, which would swamp Israel demographically.