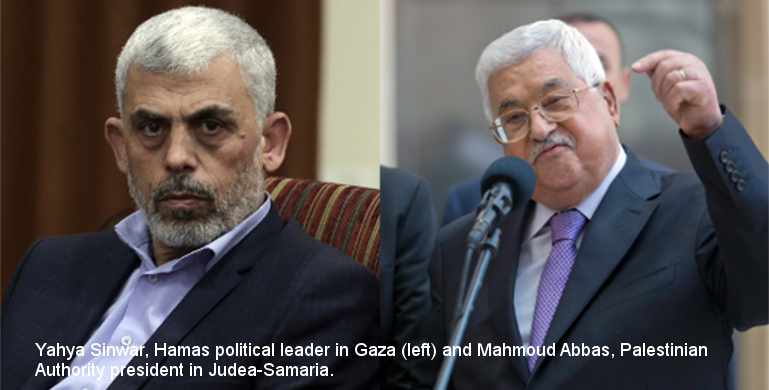 Governments of the Palestinians’ two ruling dictatorships are in shambles—and at war with each other. How can Israel possibly achieve peace with them at this time?

Neither the Palestinian Authority in Judea-Samaria (the West Bank) nor the Islamist terror group Hamas in Gaza has held elections since 2006, and the two factions are battling each other in a vicious power struggle. Both refuse to recognize the Jewish state or accept Israeli offers of peace.

While Israel, with the United States, made generous land-for-peace offers to the Palestinians in 2001 and 2008—and left the entire Gaza Strip to the Arabs in 2005—neither of the two major Palestinian groups has accepted Israel’s offers . . . or even its right to exist.  What’s more, both the Palestinian Authority and Hamas governments are in disarray, squandering precious resources waging a bitter internecine war. Until these warring Arab factions reconcile—and accept Israel as their neighbor—it’s impossible to imagine a peace agreement among them.

Splintered Palestinian Movements: In 1964, Arabs in Palestine formed the Palestinian Liberation Organization (PLO), whose goal was to “liberate Palestine,” including Israel. In 1969, the PLO elected as its leader Egyptian Yasser Arafat, who inspired the First Intifada, a terrorist guerilla effort against Israel, which ended with the 1993 Oslo Accords. Under these accords, the Palestinian Authority (PA) would run Arab parts of Gaza and Judea-Samaria, while Israel has controlled the remaining parts until the Israeli-Arab conflict can be resolved through peace negotiations. After Israel’s complete withdrawal from Gaza, terror group Hamas won Palestinian legislative elections in 2006, then seized control of Gaza from the PA. Since 2007, Hamas has ruled Gaza as an Islamist fiefdom, and the PA and Hamas remain fierce enemies to this day.

The Palestinian Authority: Secular Dictatorship. While grounded in Muslim values, the Palestinian Authority has always been secular. Following Arafat’s death in 2004, Mahmoud Abbas was elected president of the PA for a four-year term, yet has held the grip of power ever since. Today’s Palestinian Authority is rife with corruption, its economy is effectively bankrupt, it suffers from unemployment of 29%, and without foreign subsidies it would collapse. Despite its charter under the Oslo Agreement to make peace with Israel, the PA has remained dedicated to wresting all of the Holy Land from Jewish control.  It has never recognized Israel as a Jewish homeland and has demanded that all Arab refugees from Israel’s War of Independence in 1948—as well as some five million descendants of those refugees—be “returned” to Israel, thus destroying the Jewish state demographically. Israel—under the sponsorship of Presidents Bill Clinton in 2001 and George W. Bush in 2008—offered the Palestinians about 98% of Judea-Samaria, as well as a capital in eastern Jerusalem, in return for peace.  Yasser Arafat turned down the first offer, and Mahmoud Abbas rejected the second.  Since 2014, Abbas has refused to negotiate with Israel.

Hamas: Islamist Dictatorship. An outgrowth of Egypt’s Muslim Brotherhood—which also spawned al Qaeda—Hamas is a fundamentalist Islamist organization. Its charter calls for the conquest of all Palestine—including present-day Israel—and the establishment of an Islamic state. Because of Hamas’ brutal use of suicide bombings and rocket attacks on Jewish civilian populations, it has been declared a terrorist organization by the U.S. State Department and the European Union. While Hamas won power after Palestinian parliamentary elections in 2006, it has refused to reject violence, and in fact took violent control of Gaza. Today Hamas rules Gaza brutally, according to strict Sharia law. Hamas has launched three wars against Israel, most recently in 2014. Because of Hamas’ belligerence, Gaza is currently under sanctions from Egypt, Israel and the Palestinian Authority. While the PA and Hamas have made many attempts at reconciliation, all have failed, and relations between them remain poisonous.  The people of Gaza suffer an unemployment rate of 44%, just four hours of electricity daily and a dysfunctional economy. Hamas currently receives some financial support from Iran and Turkey, much of which is used to continue the terror group’s war against Israel.

In order to forge an Israel-Palestinian peace, all parties must sincerely want it and be capable of carrying out a plan for reconciliation. It’s clear that today’s Palestinian dictatorships lack the ability to make peace among themselves, humanely govern their people or commit to peace with Israel. While Israelis pray for peace, Palestinian leaders still pray for Israel’s destruction.