FLAME
X
Put text, tables or any other HTML contents here, as you would put in any other HTML page. ..... and more.
Skip to content
Home » Despite vicious attacks on Israel by the media, the U.N. and Islamists, we continue to win!
Is anti-Zionism really racist? The controversy is raging— and it has smoked out the snakes.Jacques Gautreaux2018-12-18T15:50:36-07:00 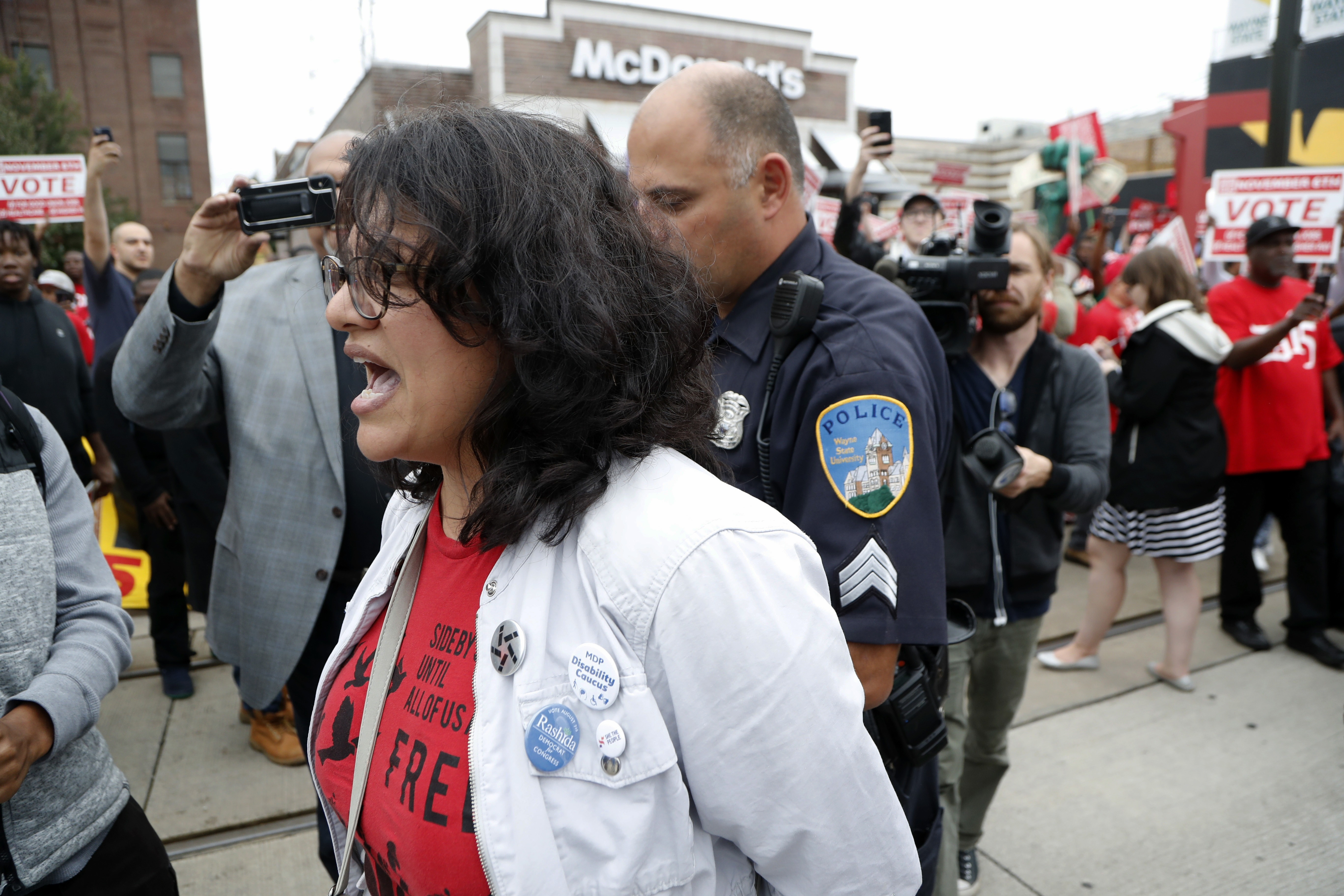 A Wayne State police officer escorts congressional candidate Rashida Tlaib as she is arrested following a protest with workers from local McDonald’s franchises, the airport and hospitals outside a McDonald’s restaurant, Tuesday, Oct. 2, 2018, in Detroit. The group of protesters were calling for higher pay and the right to form unions in Michigan.

Is anti-Zionism really racist? The controversy is raging—and it has smoked out the snakes.

The anti-Semitism of Israel’s enemies now stands in high relief. Will this treachery inspire you to fight back?

Won’t you act now to help us tell the truth about Israel in mainstream media? Just go to donate now to contribute.

Did you see the op-ed in the New York Times two weeks ago, lamenting that anti-Zionists are being accused of anti-Semitism? The author, Michelle Goldberg, argued that opposing Israel’s existence is only anti-Semitic if you believe Israel is “the embodiment of the Jewish people.”

Well, yes, Michelle, that’s precisely what the state of Israel is—despite claims by a tiny majority of Jews, who deny any identification with “Jewish ethno-nationalism.”

But it’s doubly galling when the Jewish state is attacked from the far left—like the new U.S. Representative Rashida Tlaib, who supports boycotting Israel, or like Michelle Goldberg herself, who voices apologies for Israel haters, calling their racism simply a form of “special scrutiny” on the Jewish state.

It was coincidental that FLAME’s latest editorial message—”Anti-Zionism Is Racism“—appeared in the New York Times just two days after Goldberg’s screed. But thank goodness it did!

Though as you know, running messages in mainstream media that defend Israel from the haters—that offer a powerful antidote to the virulent lies and insidious anti-Semitism of journalists like Michelle Goldberg—that’s exactly what FLAME does.

Won’t you help FLAME continue to run hard-hitting editorials in the New York Times and other media by renewing or becoming a new member in FLAME? Go to donate now to join us.

Here at FLAME, we have fought Israel’s attackers in the press for 29 years—and we fight valiantly on, no matter who the political leaders are in the United States or who they are in Israel.

We hope you’ll join us in redoubling our commitment to telling the truth—hasbarah—about Israel in mainstream media. Won’t you help us achieve our largest hasbarah budget ever by making your final 2018 membership donation today—right now while you have this email in front of you?

Want some good news? Australia just announced that it will follow the United States and Guatemala in recognizing Jerusalem as Israel’s capital! More will follow!

Won’t you please help us rejoin the fight in 2019 with more muscle—in more media—than ever before? Please make a generous tax-deductible donation before the December 31 year-end deadline.

• The media still continue to pound Israel daily with lies and biased analysis
• The U.N. continues almost weekly to pass anti-Israel resolutions
• The BDS movement continues to win votes at major universities based on abject lies (though we are winning important battles as well!)
• Iran, which still makes murderous threats against Israel, every day moves closer to a nuclear bomb, enabling it to destroy 6.5 million Jews in Eretz Yisrael

In 2018, with help from members like you, we’ve published the following outspoken messages to millions of readers in support of Israel, which I invite you to review: