FLAME
X
Put text, tables or any other HTML contents here, as you would put in any other HTML page. ..... and more.
Skip to content
Home » Despite vicious attacks on Israel by the media, the U.N. and Islamists, we continue to win!
Omar-Tlaib Non-Visit to Israel Distracts from the Real ProblemJacques Gautreaux2019-08-20T15:45:08-07:00 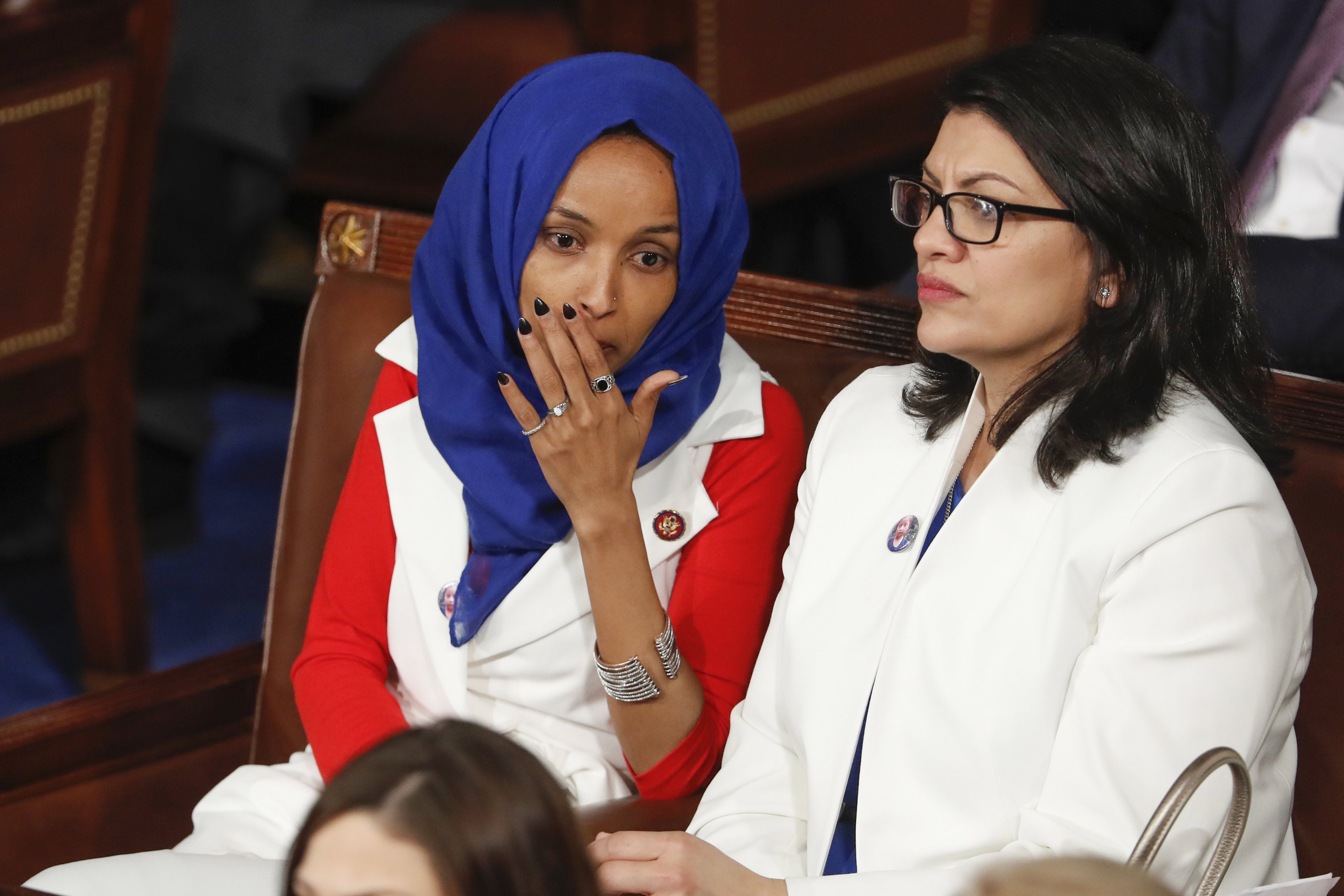 Ilhan Omar and Rashida Tlaib, U.S. Representatives who frequently employ anti-Semitic imagery and accusations and support the hateful BDS movement. They were recently denied entry to Israel to conduct a defamatory propaganda tour.

Brouhaha over Omar-Tlaib Non-Visit to Israel Distracts from the Real Problem: Anti-Semites in Congress

Clearly the Omar-Tlaib non-visit to Israel has been fraught with missteps—Trump’s coarse tweets; a premature statement by Dermer saying the two would be allowed in; the appearance of Netanyahu vacillating on whether to accept them. But no mistake: Omar and Tlaib are the anti-Semitic stars of this fiasco.

First, Israel had every reason and every right to ban Omar and Tlaib:

• Both Congressional members are anti-Semites—and let’s not mince words: That means racists. Evidence: Both Congresswomen continue to employ anti-Semitic tropes regarding Jewish dual loyalties, Jews paying off U.S. politicians and half a dozen more (see next bullet).

• Both legislators support the hateful Boycott, Divestment and Sanctions movement: BDS is clearly anti-Semitic , since it denies the right of Jews—unlike any other ethnic group—to self-determination and a nation state in their ancient homeland.

Because BDS stands for Israel’s destruction, the movement has been overwhelmingly condemned in bipartisan votes by both houses of Congress. In addition, Israeli legislators recently passed a law barring supporters of BDS from entering Israel, which Israel has every right to enforce.

• Omar and Tlaib reportedly intended to visit Al Aqsa Mosque atop the Temple Mount, the scene of dozens of spontaneous riots, many violent, in the past. Surely the notoriety of these two members of the U.S. Congressional “Jihad Squad” provide enough incendiary fuel to spark another conflagration.

In short, if you support the “rights” of Tlaib and Omar to visit Israel, you’re giving aid and comfort to racists who were preparing to demonize Israel and possibly endanger Israeli police and other citizens.

• The U.K. once banned Israeli politician and future prime minister Menachem Begin from visiting, and it has forbidden entrance by another Israeli member of parliament, Moshe Feiglin, because he was, British officials declared, “fostering hatred which might lead to inter-community violence in the U.K.”

• The U.S., under the Obama administration, barred entry to a right-wing member of the Israeli Knesset, Michael Ben-Ami, in 2012. We find no record of Democrat objections to this action. Likewise, surely, no elected Democrat would complain if a Hungarian white supremacist were banned from visiting the U.S.—he would after all rightly be termed a “racist.” Yet members of the House majority caucus are livid about Israel banning two anti-Semitic Representatives.

If you criticize President Trump and Prime Minister Netanyahu for wanting to prevent Omar and Tlaib from visiting Israel—as Democratic Presidential candidate Joe Biden did in a tweet last week—without holding President Obama to the same criticism (which Biden, his then-Vice President, failed to do), you are hypocritical.

Third, no country should be criticized for barring entry to those who would destroy that country.

Surely we can agree that free speech, even in the most liberal democracies, is not protected for foreigners—especially those hostile to those democracies. Yet despite the openly anti-Israel sentiments expressed by Ilhan Omar and Rashida Tlaib, Israel was willing to allow to their visit under certain circumstances.

• Ilhan Omar and Rashida Tlaib had every opportunity to visit Israel on an organized trip with 41 of their Democratic colleagues from the House of Representatives several weeks ago, but they spurned the invitation. That trip would have allowed them to visit both Israel and Judea-Samaria, where their colleagues met with Palestinian president Mahmoud Abbas.

• Tlaib’s and Omar’s Middle East trip was sponsored by Miftah, an organization that supports BDS, approves of suicide bombings against Israeli civilians and reportedly has ties to the Popular Front for the Liberation of Palestine, a designated terrorist organization.

• After Israel denied Tlaib’s visa for the Miftah trip, she asked for “humanitarian” permission to visit her Palestinian grandmother and committed to avoiding pro-BDS and anti-Israel activities. Once Israel granted that permission, Tlaib back-tracked and decided she could not accept those conditions.

While no country is obligated to permit its enemies to enter, Israel showed uncommon willingness to host Tlaib and Omar. But Israel was understandably not willing to support an anti-Israel propaganda tour on its own soil.

Fourth, the House of Representatives should expel Tlaib and Omar.

The U.S. Constitution provides that “Each House [of Congress] may punish its members for disorderly behavior and, with the concurrence of two-thirds, expel a member.”

House Republican Steve King was justifiably censured by Democrats and his fellow Republicans for controversial comments he made about white supremacy, which were considered racist. King lost all his committee posts, including a senior position on the Judiciary Committee.

Surely the drumbeat of anti-Semitic comments by both Tlaib and Omar, as well as their support of the blatantly racist BDS movement qualify them for the harshest possible punishment from their Congressional colleagues. (If they were white supremacists, would they be spared?)

I hope in your conversations with friends, family and colleagues you’ll explain why attempts to turn attention away from these disgraceful politicians by attacking President Trump or Prime Minister Netanyahu are diversionary tactics distracting from the moral cancer afflicting the House of Representatives.

In addition to keeping the focus on the despicable characters of Ilhan Omar and Rashida Tlaib, I hope you’ll also take a minute, while you have this material front and center, to visit FLAME’s lively new Facebook page and review the P.S. immediately below. It describes FLAME’s new hasbarah campaign—a refutation of the myth of “Palestinian territories.”