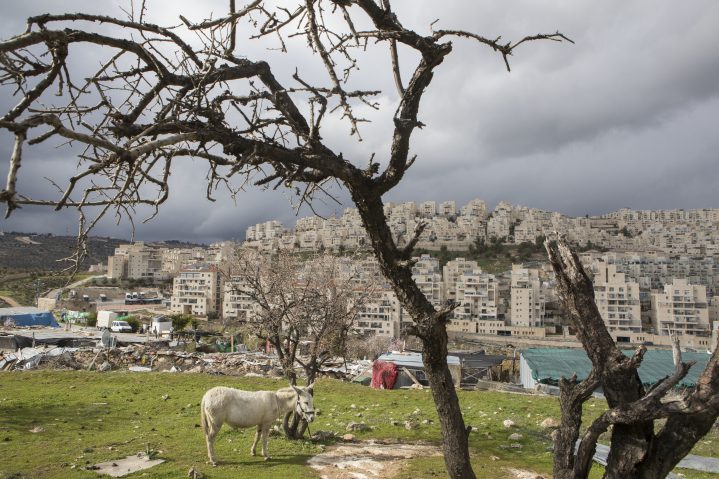 Har Homa, one of the neighborhoods in eastern Jerusalem where some 365,000 Israeli Jews live and which the Palestinians claim as their territory. These assertions, however, have no basis in international law.

What Is “Palestinian Territory”?

Mainstream media often refer to “Palestinian territory,” yet there is no such legal entity. This land—Judea-Samaria—is disputed and awaits a peace agreement.

“Israeli presence in Biblical lands is based in international law.”

Israel’s administration of Judea-Samaria, far from being illegal, has powerful legitimacy. In fact, Israel is in full compliance with international law: It is not occupying others’ land, its settlements are lawful, and Palestinians have no documented legal claim to this territory. Israel’s authority in Judea-Samaria is based on four grounds: 1) past Jewish presence; 2) current Jewish presence; 3) international mandates; and 4) international conventions. While sovereignty over these territories is disputed, this will ideally be resolved through negotiations between Israel and the Palestinians.

1) Jews are the 3,000-year-old indigenous people of the Holy Land. The Bible provides strong documentation of a Jewish presence, including the Jewish Kingdom of David in 1000 BCE. Biblical archeology confirms that Jews have lived in the cities of Hebron, Shiloh, Jericho, Bethlehem and Jerusalem in the heart of Judea-Samaria continuously for some 3,000 years, except during Jordan’s illegal occupation, 1948-1967, when Jews were ethnically cleansed.

2) Jews are the majority population in 60% of Judea-Samaria. Around 600 CE, Arabs invaded and colonized what was then called Palestine. While today Arabs are the majority population in about 40% of Judea-Samaria, Israeli Jews are the majority in some 60% of this territory—the so-called Area C, designated by the Oslo II Accords, These Accords, agreed to by Israel and the Palestinian Liberation Organization in 1993-95, give Israel full control over administration and security in this region. No Palestinians have been forcibly removed from Area C, and land on which Israelis live there does not violate private Palestinian land rights.

3) Israel has sovereign rights in Judea-Samaria by international law. About 500 years ago—between 1512-1520—the Middle East was conquered by the Ottoman Empire. The Ottomans ruled this huge territory until World War I (1918), when they were defeated by the Allies. Allies  Britain and France helped create new Middle East nation-states through a series of “mandates,” which were approved by the League of Nations, pre-cursor of today’s United Nations. In 1922, the Mandate for Palestine gave Jews rights to immigrate, settle and buy land for a national home between the Mediterranean Sea and the Jordan River. Land to the east of the Jordan River was ceded to the Arabs and later became Jordan.

Using the rules of international law that apply everywhere else in the world, Israel’s claim to the land between the Mediterranean and the Jordan River is fully legitimate. While five Arab armies attacked Israel’s Mandatory rights in 1948, Israel repulsed them in its War of Independence. Israel took full control of the Mandatory territory during its Six-Day War against invading Arab armies in 1967.

4) Israel complies with the 4th Geneva Convention. The 4th Geneva Convention holds that no conquering state can forcibly move its population into the conquered state. While some argue that this convention makes Israeli settlements illegal, this is demonstrably false. First, Israel has never forcibly moved Israelis into Judea-Samaria—the lands it conquered during the 1967 War, in which it defeated attacking Arab armies. All immigration to this area by Jews was voluntarily initiated by individuals. Second, Judea-Samaria was not a state when Israel conquered it—rather it was occupied by Jordan, whose sovereignty over this land was generally not accepted by the world community. Even more important, following the Six-Day War, Jordan gave up all claims to Judea-Samaria. Thus, the 4th Geneva Convention does not apply to Israel, and its West Bank settlements are legal.

Attempts to resolve questions of sovereignty in Judea-Samara with loaded terms like “illegal occupation” or “Palestinian lands” are disingenuous. Israeli presence in Biblical lands is based firmly in history and international law. “Ownership” in these territories must be resolved between the parties—though to date, the Palestinians have rejected all offers of land for peace.