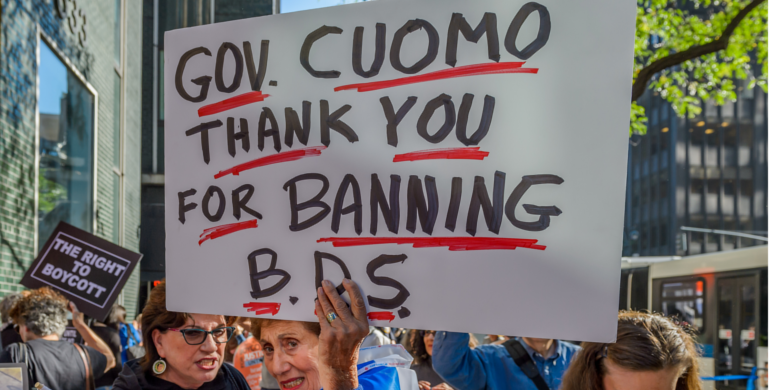 Some 26 states have made BDS against the Jewish state illegal, just as states have made it illegal to discriminate commercially against women and ethnic and religious minorities. The Senate recently passed a bill affirming this right.

What Does BDS Really Want?

Media often report that the Boycott, Divestment and Sanctions (BDS) movement is a “protest against Israeli occupation of the West Bank”—but facts prove otherwise.

Mainstream press and politicians whitewash the BDS position, representing it as legitimate criticism of Israeli policy toward Palestinians. The truth is, BDS stands openly against the very existence of Israel—and advocates anti-Semitic measures to destroy the Jewish state.

“BDS doesn’t seek policy changes—it seeks the end of the only Jewish state.”

The U.S. Senate recently passed a landmark bill—the Combating BDS Act—upholding the rights of states to punish companies that discriminate commercially against Israel. While the ACLU, a few media and several presidential candidates opposed this Act, saying it violates free speech rights, this rationale ignores the fundamental nature of the Boycott, Divestment and Sanctions movement.

In fact, BDS has nothing to do with political speech and everything to do with commercial discrimination against a religious and ethnic group—Jews—as well as opposition to Jewish national self-determination. Imagine these media and politicians objecting to an act of Congress meant to protect the existence of a religiously Muslim or racially black country that is opposed by its enemies solely for religious or racial reasons.

Yet, as facts show—and despite media misrepresentations—this is precisely the intention of the BDS movement.

BDS doesn’t just criticize Israeli policy, it opposes the state of Israel. BDS doesn’t simply question Israel’s “occupation” of its Jewish biblical homeland, Judea-Samaria (the “West Bank”). Rather BDS opposes Israel’s occupation of the entire Holy Land. The BDS slogan says it all: “Palestine shall be free from the (Jordan) river to the (Mediterranean) sea”—meaning the entire state of Israel.  Indeed, BDS founder, Omar Barghouti admits, “If the occupation ends, would that end support for BDS? No, it wouldn’t—no.” Why do the media neglect this damning fact?

BDS doesn’t criticize any other nation for its treatment of Palestinians. While BDS attacks Israel stridently for its defensive policies against terror in the disputed territories and Gaza, the movement does not criticize any other nation or ethnic group.  It ignores the slaughter of Palestinians in Syria. It voices no objection to brutal discrimination against Palestinians in Arab Lebanon, where for 70 years Palestinians have been prohibited from leaving their refugee camps, practicing in many professions and even owning land. This double standard proves that BDS is not a Palestinian support group—rather it is an anti-Semitic, anti-Israel group, bent on the destruction of the only Jewish state. Why do journalists fail to reveal this?

BDS doesn’t criticize Hamas or the PLO for their cruel oppression of Palestinians. Israeli-Palestinians enjoy full equality under law and more civil liberties and economic opportunity than Arabs anywhere in the Middle East. By contrast, Palestinians living under the Palestine Liberation Organization (PLO) in Judea-Samaria suffer under rampant corruption and the repressive dictatorship of Mahmoud Abbas.  Palestinians under the Islamist yoke of terror group Hamas in Gaza suffer even more, living in a virtual police state, whose meager resources are focused on conquering Israel. Yet the BDS movement has not a word of criticism for either of these totalitarian regimes. Why is this hypocrisy ignored?

Political criticism is legal. Commercial-based racial discrimination is not. Like any democracy, Israel welcomes valid criticism—especially since the country, at just 70 years old, is a thriving, dynamic work in progress. Israel’s legal system has ruled against many of Israel’s policies regarding Palestinians. Israel’s legislature—including Arab caucuses—vigorously debates such issues, which are reported by a free press.

But the BDS movement does not seek policy changes.  As the BDS website, literature and public speeches make clear, its entire agenda is dedicated to turning the world’s only Jewish state into

51st Muslim-majority nation. While the U.S. constitution protects free speech, it also prohibits discrimination against ethnic, religious and racial groups.  For this reason, the Combating BDS Act is legal, ethical and politically appropriate, especially since Israel is by far the United States’ staunchest Middle East ally.

The canard that the Combating BDS Act is a violation of free speech rings disingenuous, even hateful. The United States already has hundreds of laws that prevent economic discrimination based on ethnic, religious and racial identity.  Indeed, this objection appears no more than a hypocritical excuse invented by Israel haters to justify their opposition to the world’s only Jewish state.