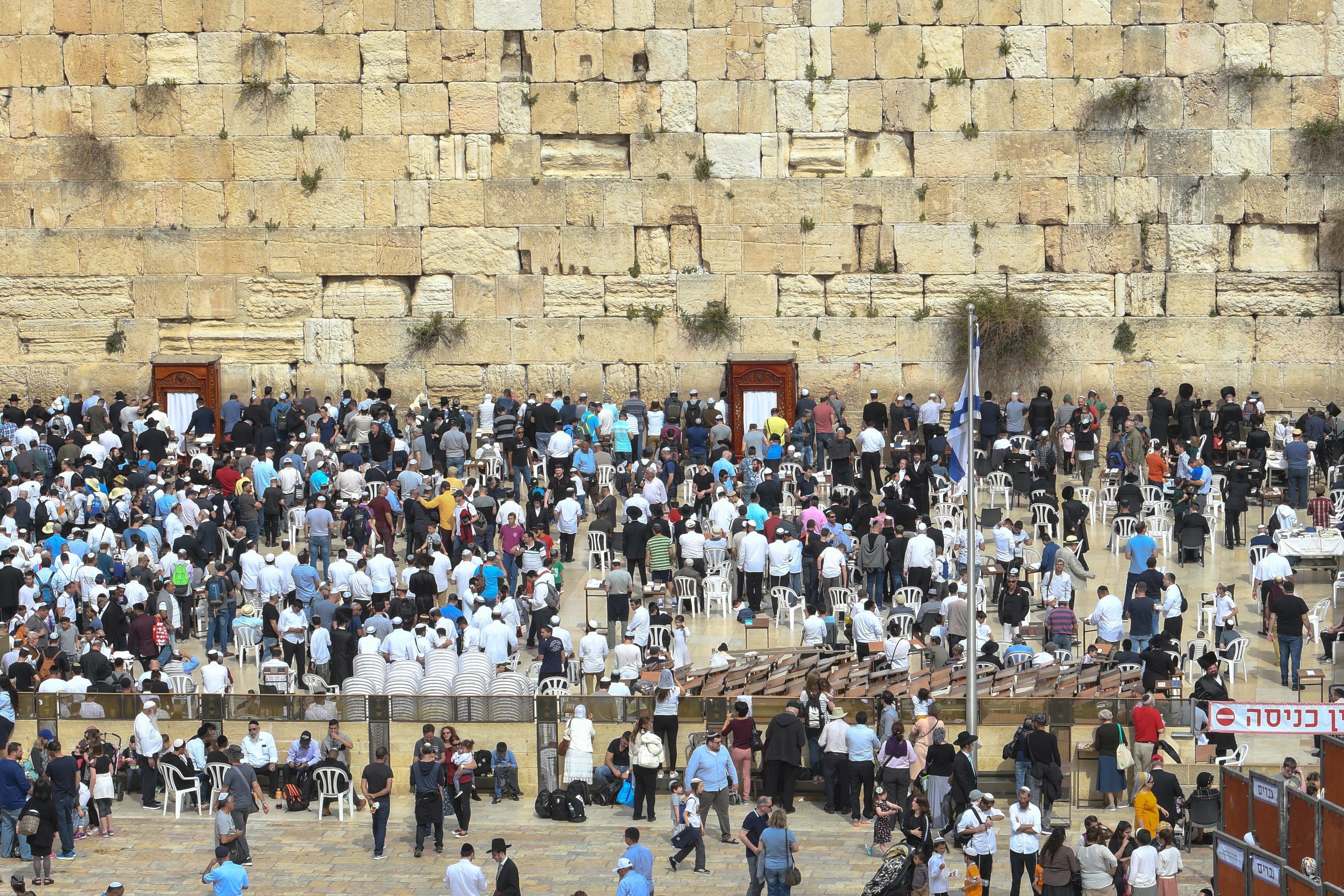 Who can pray where at the Kotel (Western Wall) fires the passions of many American Jews, who favor an egalitarian section, yet is not a burning issue for most Israeli Jews— which symbolizes a schism between the two groups.AP Images

Politics is a national sport in Israel, so everybody has an opinion. Little wonder that on my recent trip there, I had many spirited arguments with my Israeli friends.

Many of my friends are left-leaning, so we disagreed particularly on the status of Judea and Samaria: I say it’s Jewish territory until negotiated otherwise. They say it’s “occupied,” and Israel can live without it.

More striking however was how shocked leftist Israelis were at the beliefs of many liberal American Jews—that Israel uses disproportionate force against the Palestinians, that Israel’s Orthodox establishment is evil because it won’t allow egalitarian prayer at the Kotel, that Donald Trump is categorically a bad president. The left in Israel generally don’t believe any of these things.

Former Russian Jewish dissident and outgoing president of the Jewish Agency for Israel Natan Sharansky and McGill University professor Gil Troy have recently written an extensive analysis of the schism between American and Israeli Jews. One paragraph crystalizes the problem:

Certainly, the greatest flurry of email from FLAME supporters in memory was in response to my recent assertion that American supporters of Israel must necessarily praise Donald Trump for extracting the U.S. from the Iran Deal, for moving the embassy to Jerusalem and for consistently castigating the U.N. for its unfair, unrelenting attacks on the Jewish state.

Sharansky and Troy further characterize this schism, posing these dueling questions : “How, the rabbi of a non-Orthodox American congregation might demand, can I be expected to fight the delegitimization of Israel when Israel’s chief rabbinate delegitimizes me and my religious movement? To which a mainstream Israeli might answer: How can we, who’ve built this land with our sweat and blood and defend it 24 hours a day, take seriously the criticisms of non-Orthodox American Jews who, at a 70-percent rate of intermarriage, can’t even manage to stay Jewish?”

Surely outspoken public criticism of Israel by American Jews, even when it’s heartfelt, plays into the hands of Israel’s enemies—the BDS proponents, the “apartheid” screamers, the outright Jew-haters—in the United States.

Such American Jewish criticism is indeed galling to most Israeli Jews, because we Americans don’t and can’t share the experience on the ground in Israel—gut-wrenching fear of the daily rain of Palestinian rockets and stabbing attacks, plus the tangible threat of Hisbollah and Iran on Israel’s doorstep in Syria and Lebanon.

Which brings us to this week’s powerful FLAME Hotline-featured article (below) by Rabbi Daniel Gordis, the Koret Distinguished Fellow at Jerusalem’s Shalem College, who wrote the 2016 book, “Israel: A Concise History of a Nation Reborn.

Gordis argues that before criticizing Israel, American Jews need to walk a mile in Israelis’ shoes—especially of those on the Israeli left. That said and accepted, Gil Troy and Natan Sharansky conclude that the only way out of the schism is a more organized dialogue between American and Israeli Jews—in the form of a new organization, the Jewish People’s Council.

As usual, I hope you’ll forward this analysis to friends, family and fellow congregants. It may help them modulate their criticism of Israel until they find out more about what Israelis are thinking and feeling.

I hope you’ll also visit FLAME’s new Facebook page, as well as read the P.S. below, which announces at new FLAME hasbarah message on the outrageousness of expecting Israel to make peace with the Palestinians anytime soon.

If American Jewish progressives really seek change . . . they must change their utter lack of interest in what actually interests the citizens of Israel.

On our way to dinner earlier this week, my wife and I bumped into a group of soldiers. We were about to simply walk by when one of them stopped us to tell us he was a good friend of our son. American, a recent graduate of a leading American university, he’d made aliyah, joined the army, and is serving in Duvdevan, a special operations force.

We chatted with three or four of them, some American and some not, for a few moments, said good-bye and made our way to the restaurant. They were, I then remarked to my wife, the best of the best. Lovely, personable, clearly smart; and the Americans among them had made a brave and inspiring choice to do what Moses said the tribes of Reuben and Gad needed to do if they wanted to be part of our people—live wherever you want (though in this case, at least a couple had made aliyah), but join us in protecting ourselves and making life here possible.

The next morning, I awoke to an email from a close friend whose daughter is very involved in If Not Now, the organization of Jewish American millennials that is trying to “change the conversation”—while noting on its website that it takes no stand on Jewish statehood, and that it was created during the war of the summer of 2014 to “end the war on Palestine” (apparently unaware that there was also a war on Israel at the time). The email contained a link to an article in New York magazine (which suggests that INN is indeed getting some traction), which covered If Not Now, the fight it has picked with Birthright and its attitudes to the Jewish establishment.

What would the young soldiers we’d met outside the restaurant have thought of these If Not Now activists, if they’d met? I asked myself. On one side are young Jews who, while not at all oblivious to the plight of the Palestinians, have devoted this phase of their lives, at considerable personal risk, to defending the Jewish state against enemies who are quite unabashed about their determination to destroy it. Then there are those who have no compunction about accepting a free trip to Israel, knowing full well that they intend to abandon the trip to make a political statement. They have no compunction about wasting philanthropists’ money or taking a spot on the bus that could have been given to a young person genuinely interested in learning.

My sense is that the groups would have had very little to say to each other. So radically different are their worldviews and their fundamental assumptions—about Israel, an actual country with real security needs, rather than an object of starry-eyed idealism, about taking personal risk for the Jewish people and about the centrality of the Jewish state to a Jewish future – that there would not have been much to discuss.

At AJC’s recent Global Forum, held in Jerusalem last month, Einat Wilf (a former MK from Labor and a deeply thoughtful secular, liberal Zionist) stressed that American Jews seeking an egalitarian prayer space at the Western Wall have no audience in Israel. Israelis, Wilf said, divide into two groups on that issue. There are Orthodox Jews who (aside from a few statistically meaningless exceptions) are opposed to any change to the long-standing status quo. And then there is the mass of secular Israelis who, while not opposed to the egalitarian prayer space, just couldn’t care less about the Kotel. Most have no interest in prayer, anyway, and those who do could not be less interested in what seems to them the idolatry that surrounds the Wall.

Micha Goodman, responding to Wilf, noted that even Israelis who are interested care more about security and the economy, and will always acquiesce on this issue.

Why not abandon the Kotel issue, Wilf asked, and join with secular Israelis on the progressive values that interest them? It was clear that the audience couldn’t have been less interested.

In May, Israeli troops killed several dozen Palestinians, many of them young, at the Gaza border fence. It was a tragic day, but aside from a few very lone voices, even the Israeli Left declined to criticize the government or the army. Why? When Hamas leader Ismail Haniyeh said in March that the protests along the Gaza border were the beginning of the Palestinian return to “all of Palestine,” Israeli leftists believed him. They also understood that if Haniyeh was cynically going to send dozens of young Palestinians to trample a border that Israel has always defended with lethal force (while he sat comfortably many kilometers away), he was tragically going to leave Israel little choice. So the Israeli Left was quiet. The Forward, though, once America’s widely respected Jewish newspaper of record but today something entirely different, ran a piece on the incident with the headline “Israel’s Choice to Shoot Palestinians Should Horrify—But Not Surprise Us.”

The Forward ‘s editors either did not know (after all, most cannot read and understand a Hebrew newspaper) that Israeli liberals saw matters very differently and didn’t bother to ask themselves why there was no outcry here. It is that utter lack of interest in what actually interests the citizens of Israel that has to change.

To be sure, Israel’s dismissive, often hostile attitude to American Jews has to end. It is destructive—to world Jewry and to Israel’s sense of itself as a state of the Jewish people. But Israel is also a state of its citizens, and those citizens have opinions and beliefs. As a first step in healing our rift, American Jewish progressives could make matters much better if they cared what Israeli progressives think and ceased trying to remake Israel in the idealized image of the country in which they have chosen to live their lives.