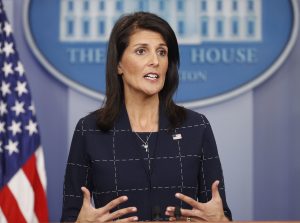 If you support Israel, can you also support President Trump? (Or, is Donald Trump good for the Jews?)

Let me ask you a question: If President Trump does something good for Israel, can you support him wholeheartedly for that?

I ask, because in a speech I gave recently to a mostly Jewish audience, I praised Mr. Trump’s recognition of Jerusalem as the capital of Israel. One of the audience members immediately raised her hand and commented derisively that, “Trump only did it because his son-in-law, Jared Kushner, is Jewish. Trump could change his mind at any time.”

While this woman’s observation may be 100% true—and I’m not sure it is—it doesn’t change the fact that moving the U.S. embassy to Jerusalem is a good thing for Israel.

Yet since about 65% of Jews are Democrats, it’s no surprise that most Jews oppose Donald Trump. Which is fine. I understand.

The President gives us many reasons to dislike him—he’s crude, he’s rude, he lies, and he does change his mind mercurially. Indeed, we could easily make a longer list of why so many Americans—Democrats and Republicans—dislike the President personally and politically.

But what’s surprising is that so many Jews—even FLAME supporters—oppose Trump even when he takes actions completely supportive of the Jewish state.

Indeed, 85% of Israeli Jews supported Trump’s decision to move the embassy, while only 46% of American Jews did. Huh?

The same poll, by the American Jewish Committee, shows that 77% of Israeli Jews support the President’s handling of U.S. Israel relations, while only 34% of American Jews do.

If we are to be optimistic, we could say that the position of American Jews seems to be a triumph of pure Democratic partisanship over rationality. After all, if you’re a Zionist—if you truly support Israel—why on earth would you not support recognizing Jerusalem as Israel’s capital, especially since the U.S. Congress did so 23 years ago in 1995?

Is your hate for Trump so powerful, that you believe he can do no good whatsoever—no matter what the issue?

If you’re a Jewish, Israel-loving Democrat, let me ask this: Why would you not support Trump’s disengagement from the disastrous Iran deal—which even a bipartisan majority of Congress did not support at the time of the agreement?

Do you really oppose Nikki Haley’s consistent condemnation of the U.N.’s various bodies for blatant, hateful treatment of the Jewish state? Can you find no praise for the administration’s recent exit from the misnamed, anti-Israel U.N. Human Rights Council?

If we are to be pessimistic, we could explain this apparent contradiction by saying that many American Jews are so far gone they simply don’t support Israel at all any longer—they’ve given up on Zionism. They oppose an American foreign policy on Israel that Israeli Jews wholeheartedly support.

If you are a Democrat who indeed supports Israel, you’d do well to resist the “hate Trump” chorus, hold your nose and voice full-throated support of Donald Trump’s policies that support Israel.

You’d also be doing the Democratic party a favor by disavowing the likes of Bernie Sanders and Elizabeth Warren, who signed a letter a few weeks ago condemning Israel’s humane and restrained response to violent Palestinian rioters on the Gaza border. Your party is in danger of leaving you . . . and the Jewish state.

This week’s FLAME Hotline-featured article (below), by commentator Jonathan Tobin, editor of the Jewish News Syndicate, explains why the Trump administration’s decision to leave the corrupt, anti-Semitic U.N. Human Rights Council was long overdue. He argues that criticism of this action merely represents hollow attacks by the left on everything Trump does, no matter what.

Tobin asserts, too, that those who forego support of Israel in favor of Trump hate or blind support of their party have lost their moral compass. They do neither Israel nor the United States nor the Democratic party any favors.

I hope you’ll forward this analysis to friends, family and fellow congregants. It will help them understand why it’s critical to remain rational on the defense of Israel and to support anyone—even the current President—who supports the Jewish homeland.

Finally, while we’re on the topic of U.N. abuses, I hope you’ll also quickly review the P.S. immediately below, which describes FLAME’s long-running hasbarah campaign demanding that the U.S. exit from the UNHRC. This is why we at FLAME applaud Mr. Trump’s and Nikki Haley’s resignation from the organization—a move we called for during the last administration as well.

An end to the UN’s human-rights farce

Trump’s critics prefer to attack him, rather than acknowledge that he was right to withdraw from a Human Rights Council that engages in anti-Semitic bias against Israel.

U.S. President Donald Trump has been on the receiving end of a lot of criticism for his willingness to flout tradition and engage in needless fights with friends while at the same time ingratiating foes. Trump seems at times to view the world as a Hobbesian war of all against all, in which the United States has no real allies or enemies. But there are times when his instinctive distrust of the foreign-policy establishment isn’t just on point. It’s absolutely necessary.

Such a moment came again this week when U.S. Ambassador to the United Nations Nikki Haley announced America’s withdrawal from the U.N. Human Rights Council. As she eloquently stated, “For too long, the human-rights council has been a protector of human-rights abusers and a cesspool of political bias. Regrettably, it is now clear that our call for reform was not heeded.”

But the irony here is that the U.S. move, which Haley indicated was motivated by American concern over the HRC’s targeting of Israel, is being used as fodder for attacks on Trump by his critics. While the president gives his critics plenty of ammunition, their willingness to come to the defense of a morally bankrupt institution tells us a lot more about them and the hysteria Trump generates on the left than it does about his shortcomings.

The merits of the case for leaving the UNHRC are unassailable. As Haley pointed out, the council’s obsessive hatred for Israel has turned it into a sad joke:

“Earlier this year, as it has in previous years, the Human Rights Council passed five resolutions against Israel-more than the number passed against North Korea, Iran and Syria combined. This disproportionate focus and unending hostility toward Israel is clear proof that the council is motivated by political bias, not by human rights. If the Human Rights Council is going to attack countries that uphold human rights and shield countries that abuse human rights, then America should not provide it with any credibility.”

Unfortunately, the United States has been lending credibility to the council ever since U.S. President Barack Obama decided that America should join it in 2009. Created in 2006, as a replacement for a predecessor body—the Human Rights Commission—that was equally tainted by hatred for the one Jewish state on the planet, U.S. President George W. Bush saw no reason to grant the agency any legitimacy.

Indeed, with the ranks of its member nations swollen by some of the worst human-rights offenders, the council has become more of a parody of advocacy for the cause of freedom than anything else.

But Obama’s faith in multilateralism and the United Nations was such that he overlooked the HRC’s faults. For the next eight years, America kept returning to the council even though it was clear that its members viewed it as little more than a platform for venting their indifference to the behavior of genuine human-rights offenders and efforts to brand Israel as a pariah nation.

Some critics of Trump’s decision claim that the United States could do more good by remaining in the organization than by leaving it. But the Obama administration’s record proved just the opposite. Human-rights offenders laughed at the empty rhetoric of U.S. representatives. Every year, it continued to pass resolution after resolution damning Israel and barely paying attention to real catastrophes. Secure in the belief that the U.S. and the European democracies were too invested in this institution to hold it accountable, the council became more irresponsible and outrageous as every measure of Israeli self-defense against terror was falsely labeled as a crime.

But, as Lauren Wolfe’s article in The Atlantic demonstrated, Trump’s critics are as obsessed with him as the UNHRC is with demonizing Israel. Quoting anonymous “human-rights experts,” Wolfe claimed the true motive for Trump’s decision was to protect the United States from being labeled a violator.

While no nation, including democratic ones, are perfect, the attempt to assert a moral equivalence between America and tyrannies like Iran, Cuba, China and Venezuela is nothing less than a partisan slur that gives cover to Israel-bashers.

What is the evidence for the attempt to label America as a violator of human rights? According to Wolfe, Trump’s border-security policies are criminal. But while Trump’s “zero tolerance” policy was wrong, it was, alas, no different from the way virtually every other nation enforces its right to decide who may cross their borders. Illegal immigration to America is not a human right.

Wolfe also claims that Trump’s “threats” to press freedom merit scrutiny from the United Nations. But while the president’s attacks on his media foes are foolish, the U.S. government has taken no actions to repress freedom of the press. Indeed, this administration has been less zealous than Obama’s when it comes to investigating leaks. Nor was Obama shy about abusing his press critics. But in the eyes of his fans, attacking Fox News was acceptable, but calling out CNN, MSNCBC and The New York Times for their partisan bias is not.

The talk of Trump as a human-rights violator in this context is nothing more than a partisan ploy on the part of those who are more interested in delegitimizing the administration than in holding the United Nations accountable for a bias against Israel that is indistinguishable from anti-Semitism.

As with his decision to move the U.S. embassy to Jerusalem and to withdraw from a fatally flawed Iran nuclear deal, Trump’s latest declaration flouts the conventional wisdom of the foreign-policy establishment. But each of these moves was the right thing to do by any reasonable moral standard.

The debate over Haley’s announcement shows that some people are willing to sacrifice Israel and the defense of human rights in order to vilify Trump. But if the anti-Trump “resistance” is willing to defend the United Nations’ worst excesses in order to justify their opposition to this necessary move, then it is they who have lost their moral compass.