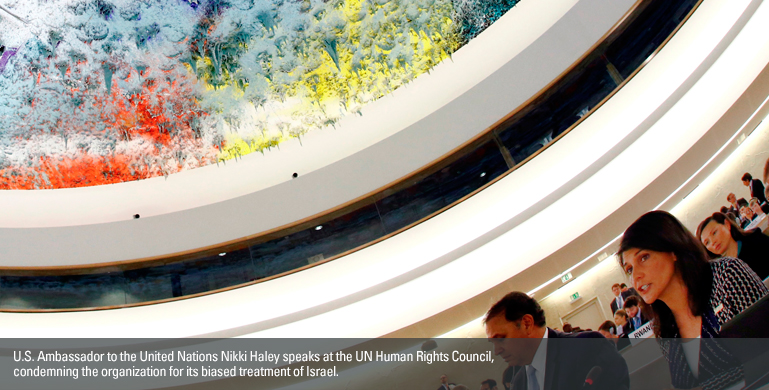 The U.S. should leave this anti-Semitic group, which devotes every meeting to condemning Israel, while ignoring the world’s most heinous human rights crimes

The United Nations Human Rights Council (UNHRC) is composed of 47 nations, nearly 25% of which, like Saudi Arabia, Cuba, China, Egypt and Burundi, are oppressive dictatorships. Yet Israel, the Middle East’s only democracy, suffers more denunciations than all other nations combined.

“Since UNHRC obsessively persecutes one of America’s strongest allies, it violates U.S. interests.”

Richard Lakin, an Israeli school teacher who founded a school for Muslim, Christian and Jewish children, was shot in the head by Palestinian terrorists who boarded a bus full of innocent civilians. Lakin’s murderer was proclaimed a martyr by Palestinian President Mahmoud Abbas. The U.N. Human Rights Council never condemned Lakin’s killers or the Palestinian Authority (PA)—nor has it condemned hundreds of other terror attacks against Israel or the PA’s acts of incitement that provoke them.

Given the mistreatment of millions of people by dozens of countries worldwide, why is Israel consistently and unfairly singled out for vilification?

Democracy chastised—oppression ignored. Israel is a champion of freedom, guaranteeing its citizens—including its 20 percent Arab population, women, LGBTQ and religious minorities—full rights of speech, assembly, the vote and government service. including the military. Few other nations on earth offer such broad freedoms, and in the Middle East, only Israel does.

Yet since its founding in 2006, the United Nations Human Rights Council has condemned Israel 61 times—more denunciations than those of all other countries combined, including Syria, Sudan, North Korea and Iran. In 2016 alone, UNHRC issued twice as many resolutions against Israel than North Korea and Syria combined. No wonder: Israel is the only nation that has a standing UNHRC agenda item dedicated to its condemnation.

What explains this injustice? First, Islam is the predominant religion in more than 25% of UNHRC member nations, which uniformly consider Israel a colonizer of Muslim lands—though the Jewish nation of Israel preceded Muslims in Palestine by more than 1,500 years. These states openly oppose Zionism—the liberation movement of the region’s indigenous Jewish people. What’s more, Muslims make up large voting minorities in many other member countries, such as India, Ghana and the U.K., which also almost always support censure of Israel’s responses to Palestinian terrorism. Second, while India maintains the world’s largest military occupation in Kashmir, Turkey illegally occupies half of Cypress, and Russia has brazenly annexed Crimea from Ukraine, those colonialist enterprises go virtually unremarked by UNHRC.

Today Israel controls territory it recovered from Arab invaders in 1967—land that was part of its ancient Kingdom of David and has never belonged to another state—yet Israel suffers castigation as a colonizer by UNHRC many times every year. Why?

When the U.S. killed hundreds of innocent civilians in air strikes aimed at ISIS in Iraq, the UNHRC took no action. When Saudi Arabia killed innocent civilians in air attacks on Houti rebels in Yemen, UNHRC was silent. Yet in 2014, when Israel retaliated against thousands of missile attacks on its civilian centers launched by the terrorist group Hamas, Israel was denounced by the United Nations Human Rights Council for excessive use of force. Why?

What is the root cause? There can only be one explanation. When the Jewish state is singled out for unremitting condemna-tion, while the world’s most egregious civil rights offenders are excused, that’s a double standard. As defined by the U.S. State Department, the use of such a double standard against Israel is anti-Semitism.

Why should the U.S. leave UNHRC? No nation deserves to be the object of obsessive racial or religious bias, and any state that supports or retains membership in UNHRC is tainted. But Israel is also the world’s most ardent supporter of U.S. diplomatic positions and the United States’ strongest Middle East ally. As the region’s strongest military power, Israel serves as a self-sufficient defender of American military interests—especially in its battles against Islamist terror groups like ISIS, Hizbollah, al Qaeda and Hamas. For these reasons, American membership in UNHRC stands in stark opposition to U.S. interests—and it openly supports an organization that contradicts U.S. values.

The United Nations Human Rights Council is a corrupt agency that shelters some of the world’s most oppressive human rights violators—many of whom sit as members. Even worse, UNHRC is unapologetically anti-Semitic, consistently attacking Israel, one of America’s strongest allies. In short, UNHRC is anathema to U.S. interests.