FLAME
X
Put text, tables or any other HTML contents here, as you would put in any other HTML page. ..... and more.
Skip to content
Home » New opportunity opens for the Palestinians: Will they seize peace and prosperity . . . or let it slip away again?
Israel: How we’re winning, how we’re not—won’t you seize the power to help Israel survive?Jacques Gautreaux2020-12-17T09:39:51-07:00 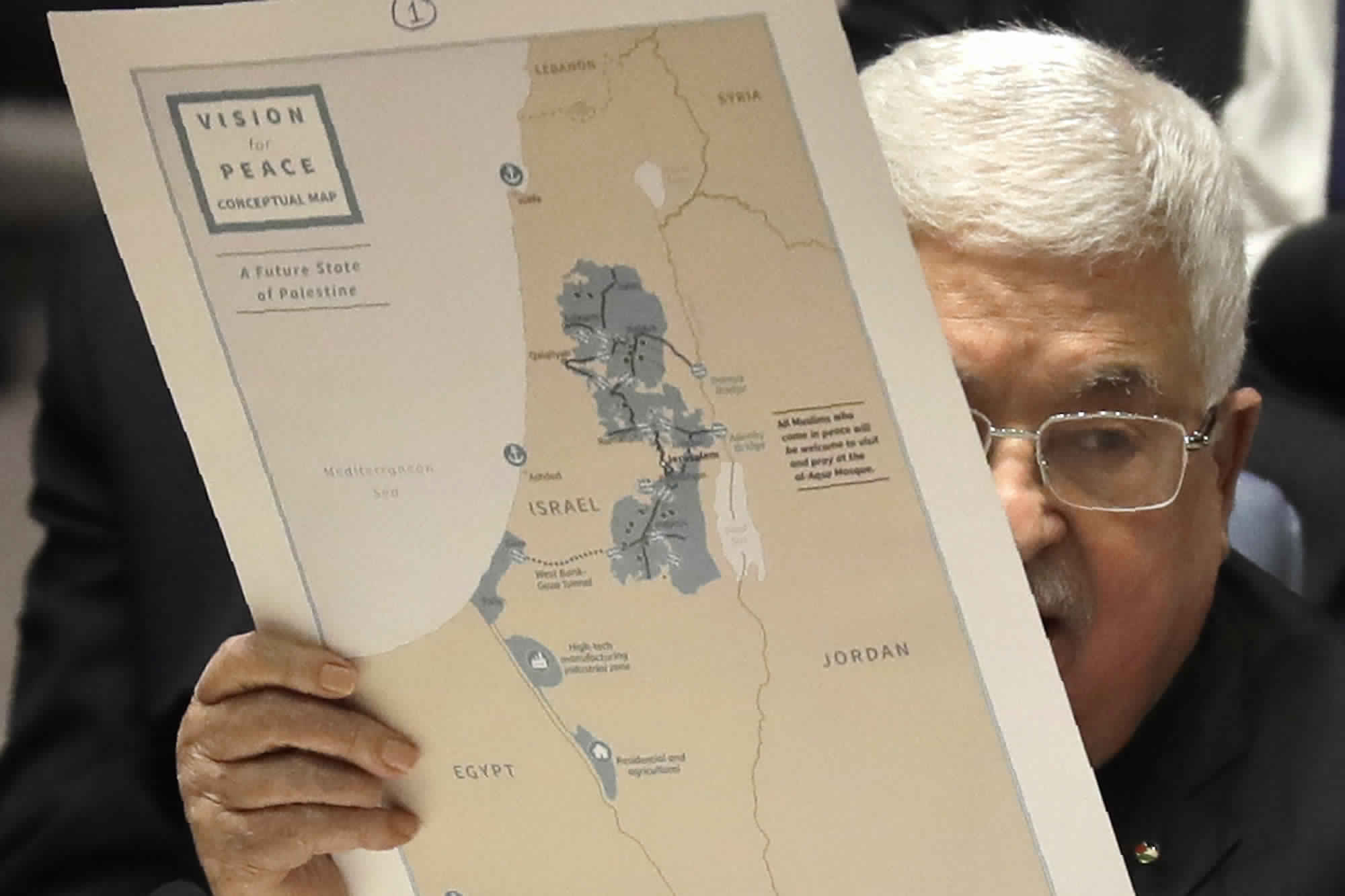 Palestinian President Mahmoud Abbas shows UN members a map of Israel that he claims belongs to the Palestinians, who have never had sovereignty over any territory in the Holy Land. FLAME publishes editorials that refute the lies of Palestinian leadership, the UN and the media.

Israel: How we’re winning, how we’re not—won’t you seize the power to help Israel survive?

Despite vicious attacks on Israel by the media,
the UN, Islamists and even members of the
U.S. House of Representatives, we continue to win!
It’s the season to celebrate—and to keep fighting back.

Won’t you step up to help FLAME tell the truth about Israel in the media?
Just go to donate now to contribute.

It is indeed the best of times and the worst of times for Israel and those of us who passionately support the Jewish state.

As we complete our Chanukah celebrations and Christmas is upon us, let’s take stock—and with it great pleasure—in having won many battles for Israel over the past year. Here are some great reasons you—and FLAME—deserve to raise a glass to Israel:

• Despite Covid-19 (and many human enemies), Israeli firms have raised a record-breaking $9.7 billion in investments so far in 2020—showing the growing global respect for Israel’s technology prowess. Our publications praising Israel’s good works furthers this respect.

• In July, Missouri became the 32nd U.S. state to pass legislation against the anti-Israel Boycott, Divestment and Sanctions (BDS) movement. Our consistent voices—yours and mine—condemning the hateful BDS message encourage such laws.

• Just last month, the U.S. State Department announced that it will ban funding for any organization it determines participates in the global BDS movement, rightfully labeling such activity as anti-Semitic. Again, our messages in the media support these positions.

• Miraculously, in the last six three months, U.S. has brokered peace agreements between Israel and three Arab Gulf states—the UAE, Bahrain and Sudan­—as well as with the South Asian nation of Bhutan and Morocco in North Africa. Along with Jordan and Egypt, this makes seven of 22 Arab states abandoning animosity to become peace partners with Israel.

L’chaim! We can celebrate these wins, of course, thanks to work by FLAME—and pro-Israel supporters like you and me—nationwide. Our work truly pays off.

We’ve won battles, but not the war.

Above all, we must not forget: These are also the worst of times for Israel, and the hard edge of history demands that we redouble our efforts to achieve victory:

• All four anti-Israel members of the U.S. House of Representatives remain in office, and two new ones were elected—forming a growing block of resistance to support of the Jewish state and advances that have been made in recent years.

These legislators have huge access to mainstream media for spewing anti-Israel propaganda. We at FLAME will be running ads in national media refuting their lies.

• The UN General Assembly so far in its 2020-2021 session has raised 17 bogus resolutions against Israel and just seven resolutions against all other states—and not a single resolution against China, Venezuela, Saudi Arabia, Cuba, Turkey, Pakistan or 177 other countries.

• The incoming Biden administration has made clear its intention to attempt to invite nuclear-weapons-seeking Iran back without preconditions into the disastrous 2015 “Iran Deal” that paved the way for Iranian nuclear bombs—which the U.S. wisely exited just two years ago.

FLAME is already preparing an editorial position paper for publication in the New York Times, Washington Post and USA Today in January opposing any return to the ill-starred Iran Deal unless it absolutely stops Iran’s nuclear weapons program, as well as Iran’s development of ballistic missiles and export of jihadi terrorism in the Middle East.

Won’t you help multiply this power that FLAME lends to Israel? Won’t you help us keep publishing our hasbarah—PR for Israel—in mainstream media? Please make your year-end donation now.

On the one hand we feel joy as we celebrate our victories for Israel and our deepest spiritual beliefs..

On the other hand, as a pro-Israel advocate, it makes me fighting mad at the media, the BDS haters, the UN, think-tank pundits, and Islamist terrorists who would destroy the Jewish state.

I also feel deep frustration and fear at how European states, the UN, US politicians and media like the New York Times have responded to the U.S. recognition of Jerusalem as Israel’s capital and the Golan Heights as Israeli territory—denying Israel’s rights to its own state and sovereignty.

So here’s my question to you: How can you and I channel our anger in a way that makes sense—and makes a difference—during this season of gratitude and good cheer?

I have an answer, and it’s why I’ve dedicated myself to FLAME. As you know, FLAME has spoken out against the lies about Israel, from BDS, the U.N., Iran and the Palestinians for decades.

Won’t you give voice to your love of Israel through a membership donation to FLAME during this year-end giving season?

With your help, FLAME has told the truth about Jerusalem, Jewish history in the Holy Land and the inestimable political and spiritual value of Israel to the United States.

In 2020, with help from members like you, we’ve published the following outspoken messages in mainstream media to millions of readers in support of Israel, which I invite you to review by clicking on them:

Second, you can celebrate the season’s holidays with even more joy in your heart, because you have done a mitzvah for Israel—a generous good deed appropriate to the season.