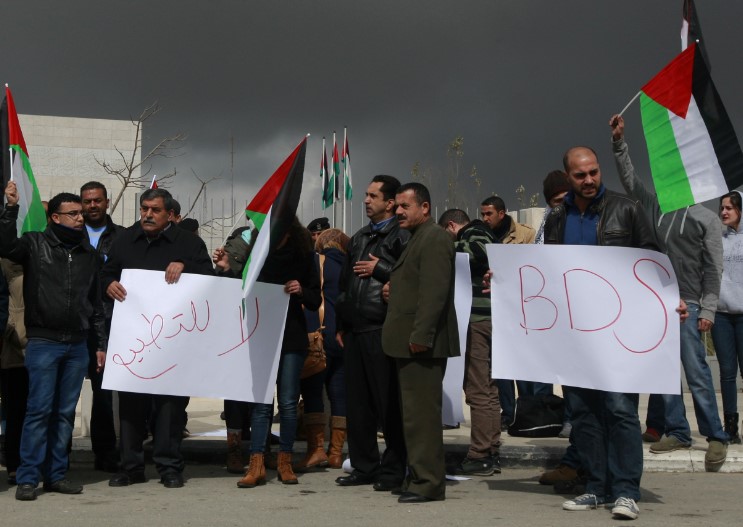 In the face of an as-yet unrevealed American Middle East peace proposal, Palestinians make choices that value victimhood over independence and prosperity. Rejecting any cooperation with Israel, the sign in Arabic reads, “No Normalization!”

Why Palestinians Reject U.S. Peace Plan Out of Hand

You have to credit senior U.S. advisor Jared Kushner for stamina and determination. He’s on a tour of Middle East countries again, trying (again) to solidify Arab support for the White House’s long delayed peace plan between Israel and the Palestinians.

But despite Kushner’s good intentions, his mission seems increasingly like a fool’s errand. Israel and Arab states, though skeptical of the plan, at least seem open to considering it.

However, the Palestinians reject the plan out of hand . . . because of its source—Trump—and its fundamental basis, which is economic development involving cooperation with Israel.

The U.S. position is that a political solution must be tied to economic solutions for the Palestinians. As Kushner said recently in Abu Dhabi, “[T]he two are very much linked together . . . we have seen a lot of efforts to stimulate the Palestinian economy over the years. The Israeli economy has been booming, but the Palestinian economy has been held back because there is not peace . . . what we are finding is that people would really like these issues to be resolved and if they are, then I think you will be able to have tremendous growth in areas like the West Bank and Gaza.”

Likewise, U.S. Ambassador to Israel David Friedman notes that “There are many, many Palestinians that would like to be freed up to engage in business ventures with Israelis.” Indeed, thousands of Palestinians work within Israel and in Judea-Samaria, often in jobs that pay higher wages than they can find in Palestinian cities.

No wonder. Collaboration with Israel is a poisonous topic among Palestinians.

Last week, Palestinian Civil Affairs Minister Hussein al-Sheikh spurned an offer by Israel to build a railway link between Israel and several Arab states that would run from Haifa into Judea-Samaria, linking to the Palestinian city of Jenin and several Arab capitals. Al-Sheikh said, “we rejected the offer. We won’t normalize relations with Israel.”

On the one hand, Palestinian rejection of the American plan—sight unseen—and repulsion of economic overtures from Israel seem irrational. The Palestinians are living on dwindling international hand-outs, and their political cause continues to lose support worldwide, especially among fellow Arabs.

An Egyptian TV anchor recently asked on air, “If you [Palestinians] want a state alongside Israel, why do you keep staying ‘no’ again and again when offered one?” An Iraqi journalist tweeted, “If the Palestinian leadership used the money donated by the Arabs since 1948 for Palestine, it would’ve already built 50 cities like Tel Aviv, 40 cities like Dubai and 30 cities like Riyadh.”

Yet the Palestinians are nothing if not consistent in their unwillingness to trade prosperity for their dream of conquering Israel. In fact, Palestinian victimhood is central to their identity. They demand that the world politically support and fund their “struggle” for statehood—which includes terrorist attacks on Israeli civilians—even as they reject all offers that would lead to greater independence.

Yet this rejection of constructive political and economic solutions is not surprising, since it is bred into Palestinian social DNA. In recent months, research by IMPACT-se revealed that the Palestinian school curriculum is filled with incitement to violence against “the remnants of the foreigners” (i.e., Israelis) and that jihad is the height of fulfillment. A formerly classified U.S. GAO report confirms that American funds are being been used by a U.N. agency to indoctrinate Palestinian school children to hate Israel.

Given this backdrop, Mr. Kushner’s quest for Palestinian peace and prosperity seems not just futile, but also sadly misdirected. Indeed, he, Mr. Trump and Ambassador Friedman seem far more committed to Palestinian wellbeing than Palestinian leadership itself. The observation that the Palestinians never miss an opportunity to miss an opportunity has ceased to be funny. Rather, it’s too true and too tragic.

Please forward this FLAME Hotline to your friends and family, so they, too, can understand why Palestinian aspirations have met no success in the 70 years since Israel’s independence. Help them explain to others that the Palestinians will not achieve peace and prosperity until they are willing to step up and seize an opportunity. With Palestinian courage and the right leadership, perhaps Mr. Kushner’s plan could be the one.