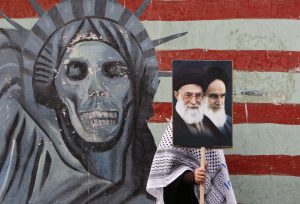 U.S. Secretary of State Pompeo gets tough on Iran—is regime change the goal?

Last week, Secretary of State Mike Pompeo offered a brief reminder of how—since the U.S. placed its mega-bet on the Iran Nuclear Deal—the Islamic Republic has increased its threat to the Middle East, the U.S. and the world. Pompeo cited burgeoning Iranian terrorism in Lebanon, Syria, Yemen, Iraq and Afghanistan.

In his half-hour speech, the Secretary laid out 12 demands for Iran—starting with cessation of financial and logistical support for Lebanese terrorist group Hizbollah, Syrian President Bashar Assad, Shiite militias in Syria and Houthi rebels in Yemen. In addition, Pompeo demanded that Iran shut down its ballistic missile program, stop all nuclear enrichment and curtail its threats against Israel.

Critics accuse Pompeo of rehashing old talking points, and indeed both he and the President have raised these complaints in the past. But for the first time, the U.S. is offering Iran full membership in (as Pompeo phrased it) “the league of nations” if it complies with all the demands.

Wendy Sherman, one of the authors of the Joint Comprehensive Plan of Action (JCPOA)—the non-treaty, non-Congress-ratified, unsigned Iran Deal—noted that Iran was unlikely to comply with any of Pompeo’s demands and that the speech represented dramatic “diplomatic overreach.”

Yet Pompeo’s speech was the most forceful upbraiding of Iran by an American diplomat in nearly a decade—in it he promised no nuclear-weaponized Iran ever, as well as the threat of crushing new sanctions until Iran agrees to acquiesce to the 12 points.

Nonetheless, the Pompeo address leaves many questions unanswered—foremost among them: What is the Trump Administration’s longer-term strategy for Iran?

Some have conjectured that Trump and Pompeo are aiming at regime change: By increasing pressure on Iran’s faltering economy, perhaps the Iranian people will arise and throw the mullahs out.

Others believe Trump is simply showing leadership on issues the Europeans fundamentally agree with—lending them the backbone required to stand up to Iran. However, given Trump’s strained relationship with European leaders, that result may be slow in coming.

This brings us to our FLAME Hotline-featured article (below) by Jonathan Schanzer, a former terrorism-finance analyst at the Treasury, now senior vice president at Foundation for Defense of Democracies. Schanzer believes Pompeo’s demands are the perfect antidote to the softball appeasement policies of the previous U.S. administration.

Schanzer also makes the undeniable point that the U.S. is powerful enough economically—especially in international banking—that our sanctions will be sufficient to force European nations and their commercial institutions to comply, whether they like it or not.

I hope you’ll forward this perspective to friends, family and fellow congregants to help them understand why the Trump administration’s tightening pressure on Iran is the right course of action .

Mike Pompeo just gave the Iran speech Kerry should have given

In his first major speech as secretary of state—a searing 20-minute stemwinder—Mike Pompeo on Monday laid out the new US strategy toward Iran, following President Trump’s decision to withdraw from the 2015 nuclear agreement.

Pompeo unveiled Washington’s plan to deploy intense economic warfare against the Islamic Republic until it halts a wide range of nuclear and non-nuclear activity. But the speech was more than just that; it was the one Pompeo’s predecessor, John Kerry, should have delivered in 2013.

Kerry, of course, was the nation’s top diplomat when America announced its interim deal with Iran that year. To reward the mullahs merely for coming to the table, he said the United States would pay hundreds of billions of dollars in blackmail to the Islamic Republic—the world’s most prolific state sponsor of terrorism—in exchange for a temporary and reversible halt to its nuclear activity.

Fast forward two years, and Kerry bound America to a more permanent arrangement, offering more than $150 billion in blackmail, while recklessly agreeing to limits on Iran that would expire within a decade. Worse, Kerry failed to address issues like missiles, terrorism and other malign activity that Iran carries out to destabilize the Middle East. We were told it was the best deal we could get.

Pompeo on Monday put an end to all that. He declared that his goal was to return to “the global consensus” before the deal.

No longer will the United States tolerate Iran’s rogue behavior, which he detailed. This includes Iran’s quest for the bomb, but also the support Iran has been providing to terrorist groups in Yemen (the Houthis), Syria and Iraq (Shi’ite militias and Hezbollah) and the Gaza Strip (Hamas).

Pompeo vowed to “crush” these proxies and declared that Iran would never get a nuclear bomb. “Not now, not ever.”

The new secretary announced that the US Treasury would unleash “the strongest sanctions in history,” unless the regime in Tehran yields. If it doesn’t, Pompeo warned, the regime will “be battling to keep its economy alive.”

Good for him. Fact is, this is the only kind of language—and policy—that could get Iran to change course.

In short, the objective is what it should’ve been in 2013—to put Iran’s leaders to a fundamental choice: Face a withering campaign of sanctions, led by the United States and increasingly adopted by its allies, or engage in constructive diplomacy that ultimately puts the Islamic Republic on a path toward peaceful coexistence with the United States, the broader Middle East and the rest of the world.

And this is not based on a vague notion of peace. Pompeo delineated a dozen areas where the Iranians need to fall in line. In exchange, he said, the Trump administration would agree to the “re-establishment of full diplomatic and commercial relations.”

Critics will rightly point out that the Iranians, reeling from Trump’s decision, are not likely to rush to the negotiating table. To save face, they need to find some negotiating leverage. And that leverage traditionally comes from malign activities, such as nuclear advances, missile tests or destabilizing the Middle East.

But the Iranians are now racing against the clock. Their currency, the rial, has been in a free-fall since the president announced his withdrawal from the deal. Inflation is through the roof.

True, the Iranian economy was already tanking, thanks to mismanagement by the regime, and this has sparked public protests in recent months.

But Trump’s sanctions have accelerated the decline, and it’s now safe to say that whatever economic improvement the 2015 nuclear deal may have yielded has effectively vanished. In this way, even before sanctions are fully implemented, the new policy is already making an impact.

Critics also point out that we can’t do this alone. The Europeans, in particular, are still stinging from Trump’s withdrawal from the deal. The Chinese and Russians are also not pleased, given the time and effort they invested in it. All are now considering plans to work around US restrictions on trade with Iran.

And Pompeo offered little to indicate that they will acquiesce.

But never underestimate the fear that can be sown by American sanctions. Ours is still the most important economy in the world. And as long as it is, the United States is right to use that as leverage to get a meaningful deal with Iran.

Pompeo made it clear that this is America’s strategy. It’s the strategy we always should have pursued.