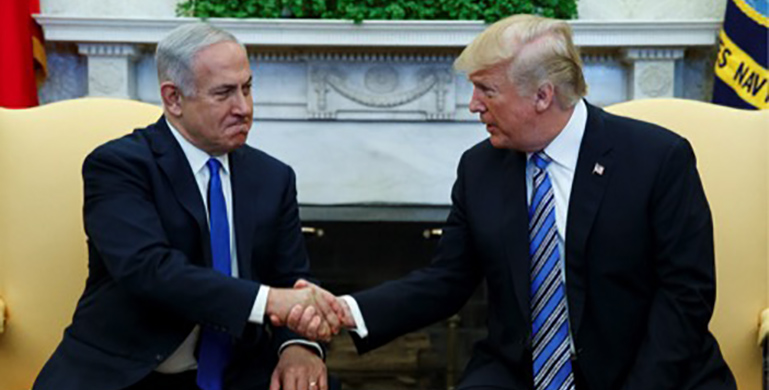 We Must Stop Iran Now

Iran, the greatest source of global terror, threatens the U.S., Israel and most of the world. It will soon acquire nuclear weapons. How can we stop this outlaw regime?

“Neither the U.S. nor the Europeans have a coherent strategy to prevent Iran’s conquests.”

Iran is on the march—to acquire weapons of mass destruction, destroy Israel and soon become the most powerful nation in the Middle East. Iranian forces and their Shiite proxies are carving a broad hegemonic land bridge—from the Persian homeland across Iraq, Syria and Lebanon to the Mediterranean Sea. Iran now also controls the government of Yemen and is funding the Palestinian terror group Hamas in Gaza. Even without a nuclear bomb, Iran has become the world’s most dangerous, imperialistic terror state.

Iran is disobeying the letter and spirit of the 2015 Iran Nuclear Deal. Despite reports in mainstream media that Iran is complying with the Joint Comprehensive Plan of Action (JCPOA)—to which it agreed with China, France, Russia, the United Kingdom, the United States and Germany—this claim is false. Indeed, the head of the U.N.’s international atomic energy agency—the IAEA—recently admitted that its inspectors have been unable to verify Iran’s compliance with Section T of the JCPOA, which prohibits the Islamic Republic from activities that could contribute to the development of nuclear weapons.

In fact, none of the IAEA reports since 2015 states that Iran has complied with the Deal’s provisions, since inspectors are unable to visit Iranian military installations. Rather, certification is left to the JCPOA signatories, who must make a “judgment” on whether or not Iran is in compliance. U.S. President Donald Trump has “decertified” the Iran Deal, asserting the “radical regime” has violated the agreement. His action requires Congress to decide whether to restore or implement new sanctions. But will Congress do its job?

Iran is aggressively developing long-range ballistic missiles in violation of a UN resolution. Iran states openly it is ready to deploy long-range missiles capable of delivering nuclear weapons. Indeed, Major-General Mohammad Ali Jafari, Commander of the Islamic Revolution Guard Corps, asserts, “the range of our missiles is 2,000 km., but we have the ability to increase the range; yet at present it is sufficient because the Americans are in a 2,000-km. radius of our country.” So, too, are all European and Middle Eastern nations, including Israel, within this deadly range. Iran’s actions place it in direct violation of U.N. Security Council Resolution 2231, which enshrined the Nuclear Deal and calls on Iran not to undertake activities related to missiles capable of delivering nuclear bombs. German, French and U.S. authorities have confirmed they consider Iran in violation of this U.N. resolution. Instead, Iran has continued defiantly to test ever longer-range ballistic missiles.

Iran is fomenting explosive instability in the Middle East—increasing its support of Shiite Houti rebels in Yemen, terror groups Hizbollah in Lebanon and Hamas in Gaza. It also helped rogue Syrian dictator Assad slaughter millions of his citizens and is attempting to establish military posts within miles of Israel’s border with Syria. What’s more, Iran’s navy has harassed U.S. Navy ships in the Persian Gulf dozens of times in recent years. Finally, let’s not forget Iran’s regular threats to destroy Israel—home of some 6.5 million Jews and the United States’ most steadfast and valuable ally in the Middle East.

The U.S., the Europeans and Russia are giving Iran free rein to plunder. Despite Iran’s continual threats against the United States (“the great Satan”) and Israel (“the little Satan”), the U.S. currently has no coherent strategy to prevent the Islamic Republic’s conquests. Despite frequent protests from Britain, France and Germany against Iran’s militarism, no European state has opposed Iran seriously—neither with increased sanctions nor military force. Likewise, Russia seems impotent or uncaring regarding Iranian belligerence. Only the lone, tiny state of Israel has attacked and destroyed Iranian sites in Syria, and it recently shot down an Iranian drone that entered Israeli air space.

When will the world stand up against Iran’s mounting imperialist aggression? When will the U,N. put teeth in its resolutions against the world’s foremost terror state? Above all, when will the U.S. and its European allies take definitive steps to stop Iran before it puts intercontinental nuclear weapons to use against the West, its neighbors and the rest of the world?