FLAME
X
Put text, tables or any other HTML contents here, as you would put in any other HTML page. ..... and more.
Skip to content
Home » Despite vicious attacks on Israel by the media, the U.N. and Islamists, we continue to win!
If you advocate a two-state solution, you must answer these 7 tough questionsJacques Gautreaux2019-08-05T14:14:55-07:00 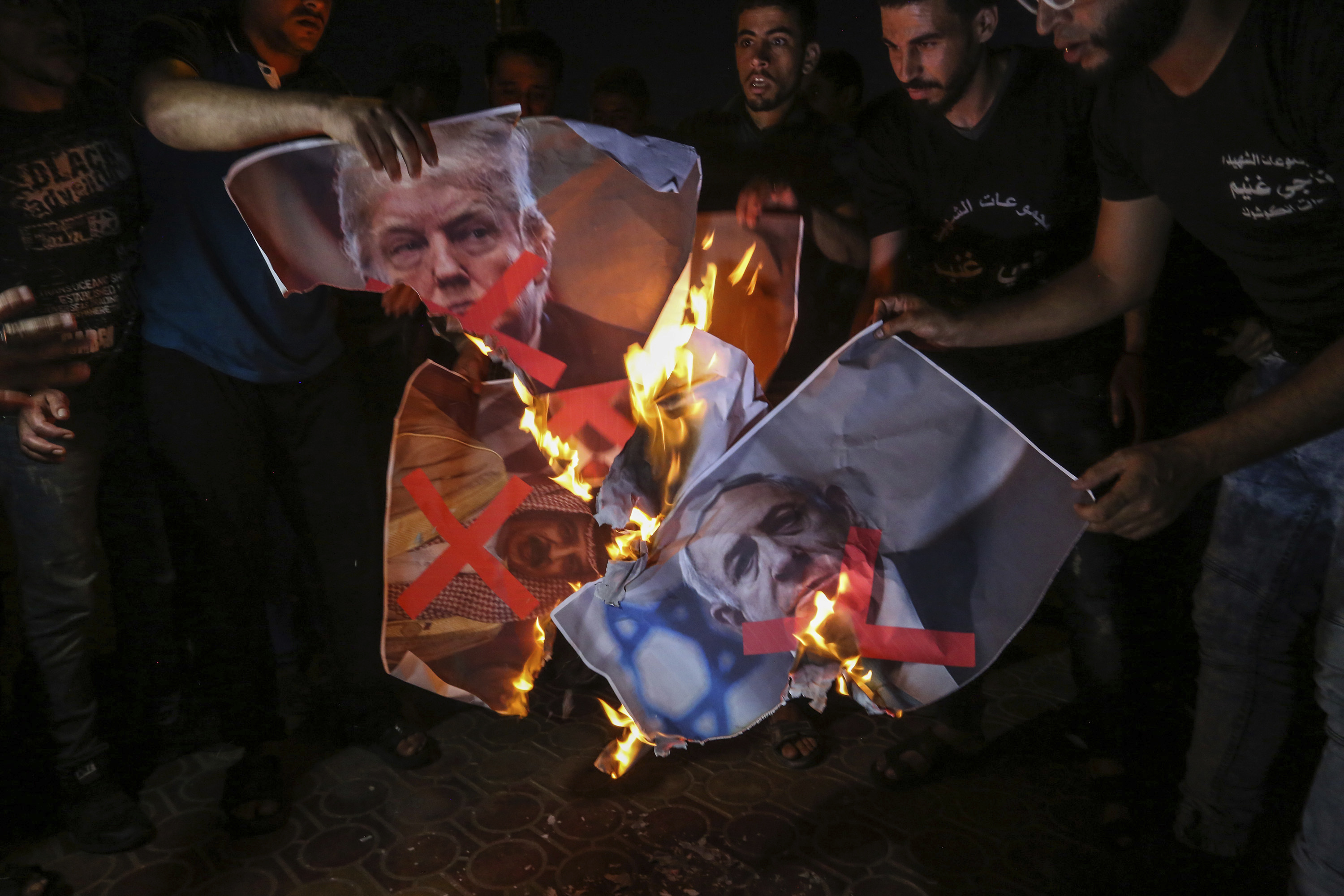 Palestinians protest recent U.S. and Arab efforts to provide a $50 billion stimulus to jump start their failed economy in Judea and Samaria (the West Bank)—just one of seven major obstacles to the fading proposal for a two-state solution.

If you advocate a two-state solution, you must answer these 7 tough questions

It’s been an article of faith for most recent U.S. Presidents, Western European nations and many American politicians today that peace between Israel and the Palestinians can only be achieved through the so-called “two-state solution”—two states for two peoples living in peace and security.

Certainly, sympathy for the Palestinian people’s national aspirations is understandable, as is heartfelt sadness that they’re forced to live under the oppression of their leadership. Unfortunately, sympathy and pity alone can’t solve the intractable problems inherent in the two-state solution—and most adherents to the position seem to ignore these formidable obstacles and jump instead to a fantasy ending

1. Why won’t the Palestinian Arabs recognize Israel as the national home of the Jewish people? This is the single greatest stumbling block preventing a Palestinian state. For 71 years, the Arabs have steadfastly refused to accept the Jewish state—preserving the hope that someday the Jews will be driven from the Holy Land. Indeed, according to a recent poll, 57% of Palestinians believe their main national goal should be a one-state solution, reclaiming all of historic Palestine from the river to the sea. While it’s clear that Western intellectuals want a two-state solution, does it make sense to insist on something Palestinian leaders or people don’t want?

2. When will the two warring Palestinian factions—Hamas and Fatah—reconcile? Ever since Hamas, the totalitarian Islamist group, won Palestinian elections in 2006 and then violently seized Gaza, it has waged war with the “establishment” Fatah party in Judea-Samaria (the West Bank). Not only are Gaza and the West Bank separated geographically, but for 13 bitter years these two factions have failed to end hostilities, despite their own ardent efforts and those of other Arab nations, most notably Egypt. Until Fatah and Hamas declare peace, there’s no entity with whom Israel can negotiate peace.

3. When will Hamas retract its sworn mission to destroy Israel? Hamas, the terrorist group that controls Gaza, is today allied with Iran, which itself advocates Israel’s destruction and supports the Palestinian terrorists with tens of millions of dollars in annual aid. How can Israel achieve security when the Hamas charter and its every action focus on eliminating the Jewish state by military force?

5. When will the Palestinians create a self-sustaining economy? While the Palestinian Authority (PA) and Hamas have received billions of dollars in aid from the U.S., the European Union and Arab states, neither group has invested in economic infrastructure sufficient to create viable industries. Hamas invests a huge portion of aid and tax money in military efforts to wage war on Israel, and Fatah is famously corrupt, making its leaders and bureaucrats wealthy, while choking its economy. Unemployment in the West Bank is 18%; it’s 52% in Gaza. The West Bank has no electrical power company; neither territory has an airport or railroad. Without massive international welfare payments, both entities would collapse—hardly a recommendation for statehood.

6. What would prevent Hamas from taking over a new Palestinian state? Hamas clearly has superior military might: It violently took over Gaza in 2007, today has 20,000 men under arms and commands tens of thousands of rockets. What’s more, it has an extremely well-organized political arm and is supported enthusiastically by Iran—an enemy of the U.S. and Israel. If a Palestinian state were formed with the Palestinian Authority in charge, how could the U.S., Israel, Jordan and Egypt be assured that Islamist Hamas terrorists would not seize the new “country”?

7. When will the Palestinians institute political freedoms and rule of law? Like many Middle East totalitarian nations, the Palestinian leadership’s current principles of self-governance in Judea-Samaria and Gaza do not include civil rights or fair government. The U.N. Special Coordinator has reported that in Palestinian jurisdictions, “many of the fundamental pre-conditions for rule of law development have yet to be realized.” Human Rights Watch reports that the PA is “arresting, abusing and criminally charging journalists who express peaceful criticism of authorities.” The security apparatus in both territories is completely outside of civilian control, subject to the whims of unelected leaders. One can only imagine the horror of living under a state governed by these norms.

Perhaps at one time a two-state solution seemed reasonable. But that was before the Palestinians turned down outlandishly generous peace offers by Israel in 2000, 2001 and 2008, before Hamas took over Gaza in a putsch and launched three wars against Israel, before Iran blossomed into a regional cancer, before the Syrian and Yemeni civil wars, before ISIS and al Qaeda, before 14 years of corrupt rule by Mahmoud Abbas.

History has changed the region inalterably. These events raise a new set of unavoidable, high-stakes questions. Until every one of these problems is addressed by Western intellectuals, the two-state solution is indefensible—and, worse, irresponsible and dangerous.

I hope in your conversations with friends, family and colleagues you’ll explain why the “two-state solution” has ceased to be viable. Very simply, the Palestinians do not have the cultural, economic or political infrastructure to support a state in this region. Worse yet, they seem not to have the desire.

Clearly, imposing a Palestinian state on Israel, the Palestinian people or the world at this time—or any time in the foreseeable future—would be a  mistake.

In addition to demanding reasonable answers to tough questions about the two-state solution, I hope you’ll also take a minute, while you have this material front and center, to visit FLAME’s lively new Facebook page and review the P.S. immediately below. It describes FLAME’s new hasbarah campaign—a refutation of the myth of “Palestinian territories.”