FLAME
X
Put text, tables or any other HTML contents here, as you would put in any other HTML page. ..... and more.
Skip to content
Home » Despite vicious attacks on Israel by the media, the U.N. and Islamists, we continue to win!
Trump’s Syria Drawdown Validates Israel’s Self-Sufficiency StrategyJacques Gautreaux2019-10-14T15:16:46-07:00 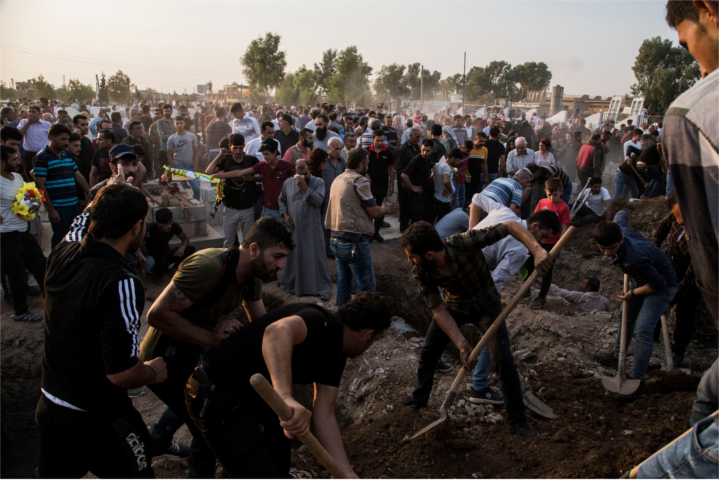 Following President Trump’s permission for Turkish troops to invade Syria, Kurdish members of the Syrian Democratic Forces are buried following battle with the Turks. Israel’s statehood and military self-sufficiency protect it from such aggression by Middle East neighbors.

Trump’s Withdrawal from Syria Validates Israel’s Self-Sufficiency Strategy—and Its Value to the U.S.

There’s been much criticism of President Trump for his precipitous drawdown of troops from Syria and granting of “permission” to Turkish President Recep Tayip Erdogan for Turkey’s troops to cross the border in order to subdue Syrian Kurds.

Mr. Trump’s decision is certainly questionable on many fronts, but it also reinforces the supreme wisdom of Israel’s strategy of military self-sufficiency—which also makes the Jewish state an even more valuable ally of the U.S. and a more attractive potential ally of its Arab neighbors.

While Trump’s foreign policy often seems uneven and uncoordinated, this recent move nonetheless seems to have a bedrock logic. Above all, as the President says, he wants to disentangle the U.S. from the “endless wars” among Middle East “tribes.”

While this logic sounds reasonable on its surface, it also creates major problems for our allies.

For one, U.S. withdrawal supports muscle-flexing by Erdogan, one of the most entrenched dictators in the Middle East, who is often hostile to U.S. and Israeli interests. Trump’s move also comes at the expense of the Syrian Kurds, who assisted the U.S. in routing ISIS from Syria (and whose national aspirations Israel supports).

In self-defense, the Kurds may be forced to seek alliance with Syrian dictator Bashar Assad and with Iran, which is working tirelessly to make Syria its latest proxy puppet.

The U.S. action also reverberates for the Gulf States, especially Saudi Arabia, for whom any reduction of pressure on Iran increases its own vulnerability to the Islamic Republic, which just weeks ago mounted devastating missile and drone attacks on Saudi oil refineries.

Finally, Israel surely cannot cheer any diminution of American influence in Syria, especially in favor of cold-enemy Turkey, especially in territory on its border where arch-enemy Iran continues an ominous build-up of military might.

Yet, Israel’s military is ranked 17th strongest in the world, and Israel is ranked the 8th most powerful nation globally based on economic influence, political influence, international alliances and military strength.

Those rankings are obviously helpful in and of themselves, but they are important because they support President Trump’s desire to have other countries contribute to fighting the “bad guys”—which both European and Arab nations have been reluctant to do, especially against Iran.

Indeed, Israel has attacked Iranian assets in Syria some 200 times, while even the U.S. has never done so. Mr. Trump should particularly be held to account for his lack of response to Iran’s attack on U.S. ally Saudi Arabia and on oil tankers in the Gulf of Hormuz—both of which certainly rise far above “tribal disputes.”

In any case, Israel’s military power and prowess position it well to handle its own conflicts without direct U.S. intervention—which cannot be said for most states in the Middle East.

It also seems clear that Mr. Trump, as past U.S. presidents, would rather have the Israeli Defense Forces on the front lines of Middle East conflagrations than American servicemembers.

But let’s not discount the $3+ billion Israel receives annually in U.S. military aid—a critical factor in providing Israel such world-class power and influence.

This expense is clearly a bargain compared with the cost of activating U.S. troops and armaments in the region in case of conflict. That’s especially true considering all such U.S. aid is spent in the U.S.—and that the U.S. regularly benefits from acquiring advanced Israel military technology and Middle East intelligence.

Nonetheless, Trump’s seeming impulsiveness and unpredictability should make Israelis and supporters of Israel nervous. Relying on this President being a constant, as opposed to a fair-weather, friend could be risky.

While preserving an optimally warm friendship with the U.S. at all levels, Israel’s best general strategy would seem to require maintenance of its ability to manage international relations—diplomatic, commercial and military—as independently as possible from this and future White Houses.

I hope you’ll emphasize to friends, family and colleagues that while Israel highly values and cultivates relationships with the U.S. government (and both political parties), it is best served by continuing to develop its independence. We never know how these winds of favor may blow—in this administration and Congress . . . or the next.