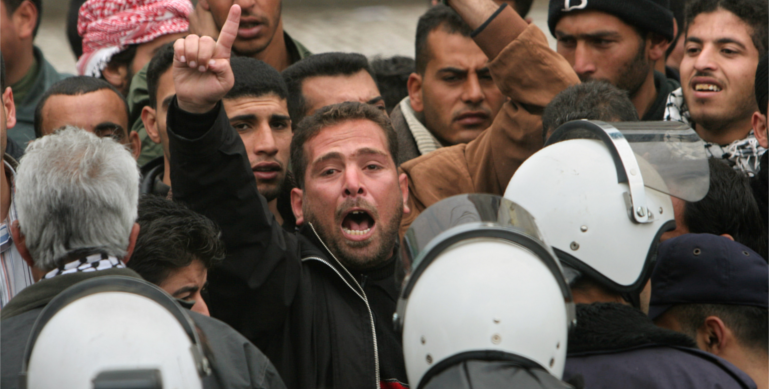 Unemployed Palestinians charge Palestinian police during Gaza protests. Despite billions of dollars in international welfare, unemployment in Gaza is 56% and 18% in the West Bank. Economic malfeasance by Palestinian rulers is one of many obstacles undermining chances of a Palestinian state.

Is a Two-State Solution Still Possible?

While sympathy for Palestinian self-rule is understandable, proponents of the two-state solution must resolve seven tough questions before it can be realistic.

The two-state solution—one for Palestinian Arabs, one for Israel, living side by side in peace and security—has long been an inviolable principle for both the U.S. and Israel. But today, intractable obstacles make two states seem more a dangerous fantasy than a viable alternative.

Hope of Palestinian independence by the United States and Israel has since 2000 produced three offers of a Palestinian state in up to 97% of Judea-Samaria (the West Bank), including a capital in Jerusalem. But profound changes in the region—and persistent Arab rejection of these offers—make a Palestinian state threatening to Israel and the entire region. Until we can resolve these thorny questions, two states can’t yet be considered a solution:

At one time, a two-state solution seemed reasonable—before the Palestinians turned down generous peace offers by Israel in 2000, 2001 and 2008, before Hamas seized Gaza and launched three wars against Israel, before Iran blossomed into a regional cancer, before the Syrian and Yemeni civil wars, before ISIS and al Qaeda, and before 14 years of corrupt rule by Mahmoud Abbas. Until major problems are resolved, the two-state solution seems at best indefensible—and, worse, irresponsible and dangerous.