FLAME
X
Put text, tables or any other HTML contents here, as you would put in any other HTML page. ..... and more.
Skip to content
Home » Despite vicious attacks on Israel by the media, the U.N. and Islamists, we continue to win!
The United Nations Didn’t Create IsraelJacques Gautreaux2019-08-12T16:24:12-07:00 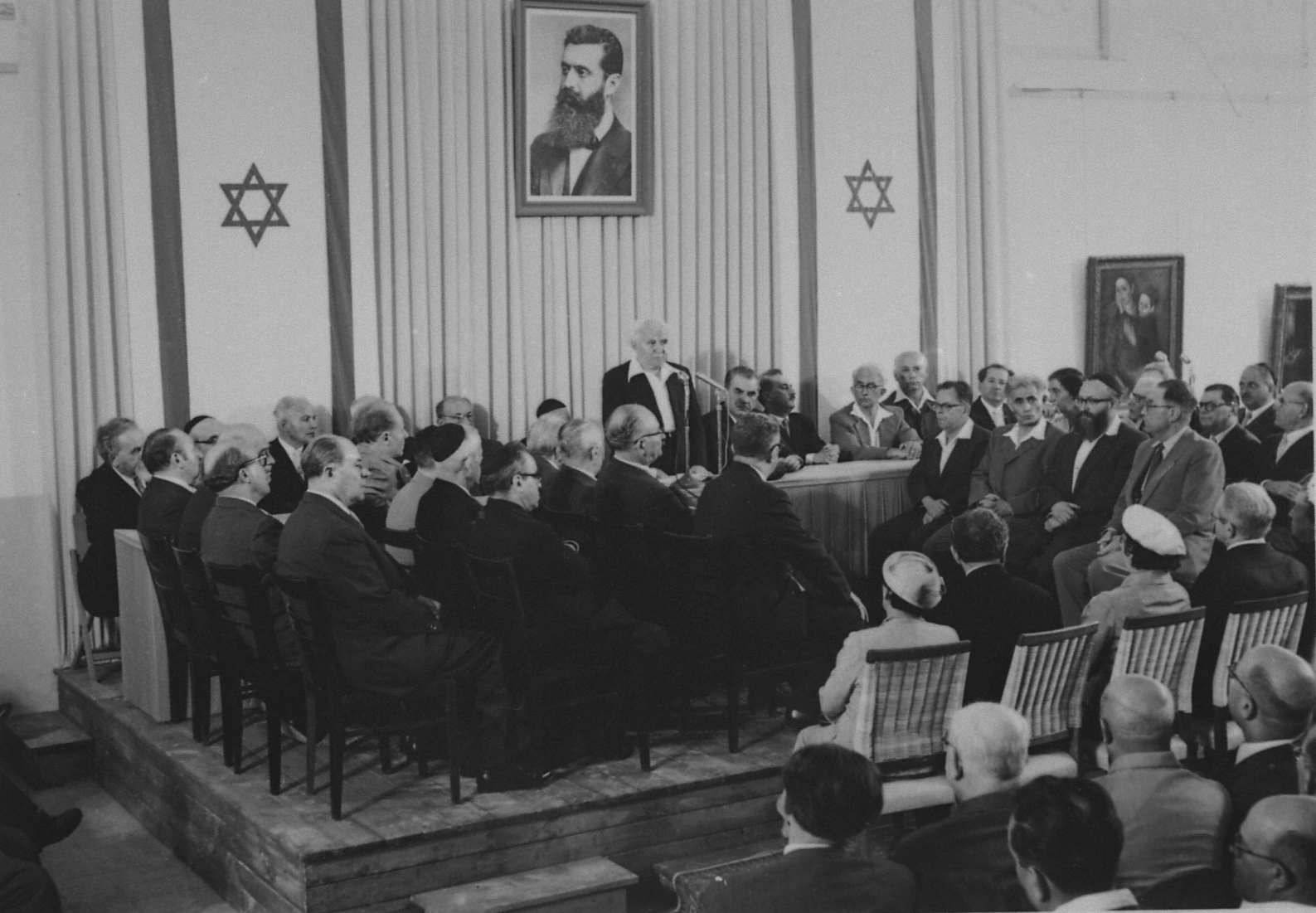 David Ben-Gurion proclaims Israel’s independence on May 14, 1949. A portrait of Theodor Herzl, the father of modern Zionism, surveys the scene. Israel owes its existence as a state to these two men, among many others—not including the toothless United Nations.

Hanan Ashwari, a member of the Executive Committee of the Palestine Liberation Organization, recently restated one of her favorite falsehoods about the creation of Israel. This falsehood—ironically often advanced by both Israel’s supporters and its enemies—holds that Israel was created by the United Nations in its Palestine Partition Resolution 181, passed on November 29, 1947 and implemented by Great Britain’s withdrawal on May 14, 1948.

It is a pernicious lie that portrays Israel as existing simply as a result of “the kindness of strangers” and as a foreign body imposed on the region by outside forces.

In fact, Jews have yearned and struggled to return to their ancestral homeland for three millennia. Zionism began as a movement in 1897, when Jews began to resettle in what was then called Palestine, culminating in Israel’s declaration of independence in 1948 on the same day Great Britain left.

Those dates in 1947 and 1948 were momentous events in the Zionist effort to create a Jewish nation in its indigenous land, and are celebrated annually in Israel and among most diaspora Jews. But November 29—the date of the UN General Assembly vote to recommend the partition of Palestine—is, appropriately, not an Israeli holiday. Appropriately though, May 14—or its equivalent date on the Jewish calendar—is feted as the Israeli Independence Day, Yom Ha’Atzmaut.

In any event, the UN’s Palestine partition is of merely symbolic value in explaining Israel’s creation.

After World War II, Great Britain was a thoroughly exhausted shadow of its former colonial power. While the creation of a Jewish homeland was the express purpose of the British Mandate starting in 1922 under the League of Nations, Britain utterly betrayed its Mandate obligations.

Rather than fulfilling its role of welcoming Jewish immigrants to Palestine, the British—in order to pacify Arab anti-Semitic terrorism—issued the notorious White Paper of 1939, which prohibited Jewish immigration to Palestine. It thus cut off six million European Jews from the only place in the world that could have saved them from Hitler’s genocide.

Neither the Jewish or Arab inhabitants of Palestine wanted the British there, and armed chaos was proliferating.

So when Britain renounced its Mandate after the Second World War, the two-year-old United Nations took the problem over. Its United Nations Special Committee on Palestine (UNSCOP) recommended that the only solution for Palestine was its partition into a Jewish state and an Arab state.

UNSCOP’s proposed borders for the two suggested states were utterly impractical, and bear little relation to the frontiers that Israel achieved after its War of Independence. During that year-long war, of course, Jordan and Egypt stole all of the land that could have become UNSCOP’s “Arab state.”

The General Assembly—by a vote of 33-13, with 10 abstaining, including Britain—voted to accept the UNSCOP plan and to recommend its implementation.

The UN vote created nothing except more chaos.

With the Arab League promising to eradicate any Jewish state, the UN General Assembly requested that the Security Council assure the fulfillment of its partition recommendation. As David Ben-Gurion, Israel’s first prime minister, succinctly stated in 1949, “The UN didn’t lift a finger” to stop the Arab onslaught. The Security Council surveyed the situation, including the massed Arab armies, and decided to let the chips—or the Jews—fall where they may.

So while the UN’s suggestion of partition lent some level of international moral endorsement to the Zionist cause—as did European guilt over the Holocaust—Israel’s birth in May, 1948 was fully the achievement of the Zionist dream through the efforts of the IDF and world Jewry.

Neither the Orwellian United Nations nor any individual nation—except Czechoslovakia—sent a single bullet to help Ben-Gurion and the Haganah bring Israel into existence. Having passed its toothless partition plan the world and its General Assembly turned its back on the Jews once again.

In fact, the partition plan was never implemented. It was rendered moot by a massive Arab invasion of the fledgling state. It is hard to see how the absence of such a UN plan would have altered history one little bit.

The UN’s fecklessness in its partition plan has been multiplied many times over in the years since. Not only did the UN do nothing to help Israel survive the 1948 Arab assault, it has consistently been the faithful agent of anti-Semitic forces for seven decades in undermining Israel’s legitimacy and survival.

So, in discussions with friends, family and adversaries, beware of the canard “the UN imposed the Jewish state into Palestine,” or that “Israel should respect the United Nations, because it owes its very existence and legitimacy to the UN.”

Explain patiently to them that Israel owes little to nothing to the United Nations, and that Israel’s reason for existence is its own ability to assert the Jewish people’s right as an indigenous people to its ancestral homeland. Oh yes—and Israel is also indebted to itself for its democratic vibrancy, its respect for its minority populations, and its ability to defend itself in the face of a hostile world . . . including the United Nations.