FLAME
X
Put text, tables or any other HTML contents here, as you would put in any other HTML page. ..... and more.
Skip to content
Home » Despite vicious attacks on Israel by the media, the U.N. and Islamists, we continue to win!
The “Progressive Agenda” Threatens Support for Israel in America and Abroad._February 26, 2019Jacques Gautreaux2019-02-24T18:52:35-07:00 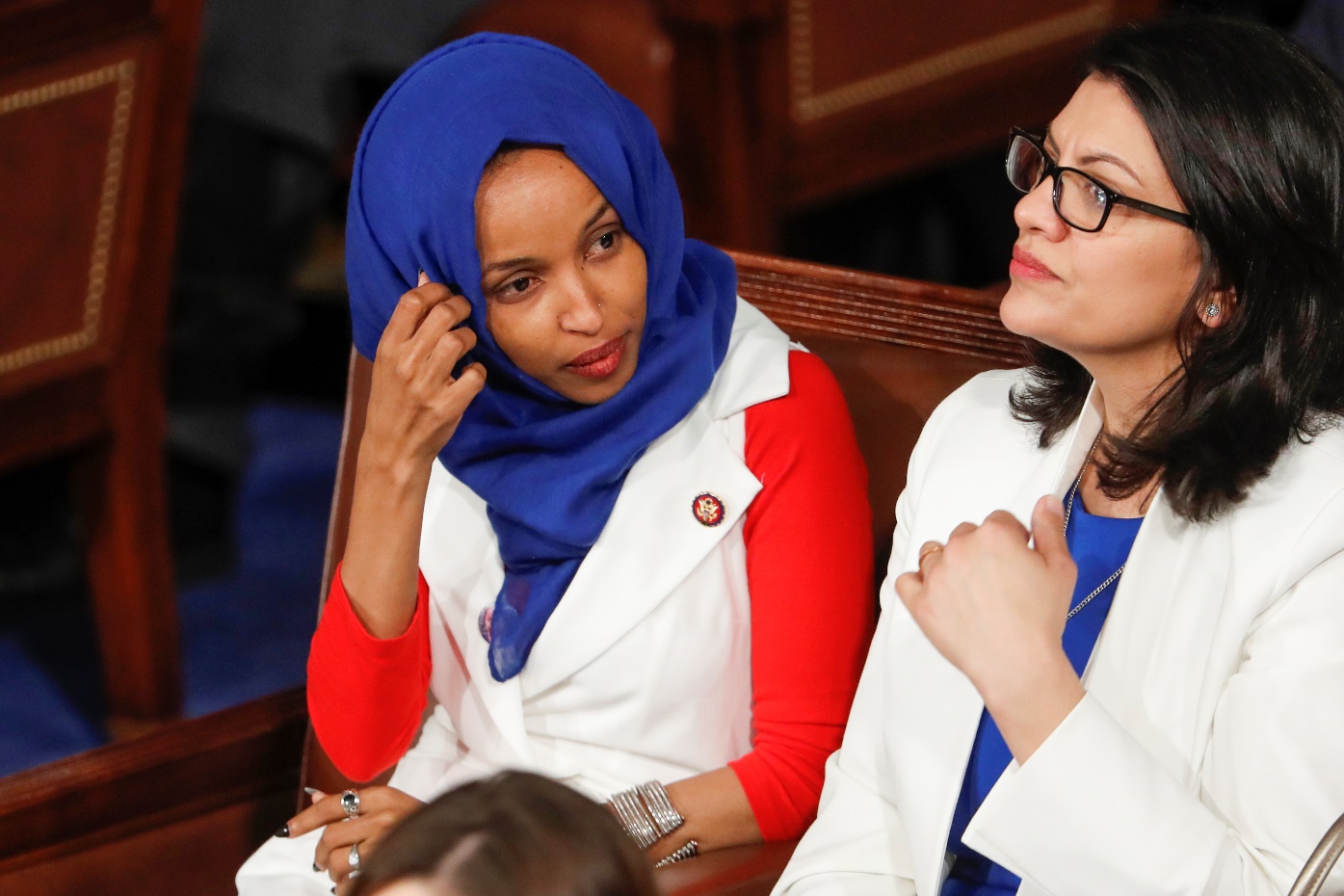 New Congresswomen Ilhan Omar and Rashida Tlaib support the Boycott-Divestment-Sanctions movement, and, with other Progressives, have branded Israel “an apartheid state.”

The “Progressive Agenda” Threatens Support for Israel in America and Abroad

Israel’s legitimacy as the state of the Jewish people is being challenged as never before. And this challenge has emerged in America and overseas from the burgeoning worldwide Progressive political movement.

Israel’s future is in strategic peril from this latest anti-Zionist threat—and nowhere more dangerously than in Washington, D. C. The collapse of bipartisan American support would leave Israel in greater danger in an increasingly dangerous Middle East neighborhood, with Iran and Russia just across the border in Syria.

Progressivism has a long history, but in the past decade it has merged with a variety of radical Leftist movements and now spells danger for Israel and Jews throughout the Western nations. If this is a harbinger of things to come, Israel will find itself utterly isolated—diplomatically, economically, and militarily.

Undoubtedly, President Trump’s emergence as the most pro-Israel president in history has infuriated members of the anti-Trump Progressive Left. It has also engendered distrust of the president’s policies among many moderate Jewish Democrats. So, for example, the president’s move of the U.S. embassy to Jerusalem was excoriated by leaders on the left who themselves had voted multiple times in Congress in favor of just that move.

Unsurprisingly, eruptions of unmistakable anti-Semitism have accompanied the increasingly shrill anti-Zionism from the Progressive Left, particularly in the halls of Congress.

Sadly, the state of the Jews has now become, for many on the Left, the Jew of the states—discriminated against irrationally, rabidly and quite selectively. One common defamatory trope is that Israel represents a Western imperialist project in the Middle East. In reality, the Jewish state actualizes an indigenous people returning to its native land.

The comments and histories of new members of Congress have justifiably caused much anguish. Representatives Ilhan Omar (D-MN) and Rashida Tlaib (D-MI) have, in particular, provoked horror among Israel advocates about the direction that Progressive politicians want to take America—and our country’s historic bipartisan support for Israel.

The truth is that the future of bipartisan support for Israel is threatened gravely by more than these two congresswomen and their anti-Semitic positions—they are but disgraceful symptoms of a larger problem.

The Jew-hatred espoused by new Rep. Ilhan Omar (D-Minn) in her attacks on AIPAC was so disgraceful that House Speaker Nancy Pelosi led an effort of the House Democratic Leadership to rebuke her, calling her comments “anti-Semitic and deeply offensive.” The congressional leaders demanded an apology from Omar.

Omar indeed apologized. The next day, though, she retweeted an equally loathsome and ignorant hate-message from a supporter.

In Omar’s forwarded message, a Democratic political operative claimed that his legislative candidate from 2016 had supported AIPAC-endorsed legislation only in exchange for AIPAC’s donation to his campaign. (As anyone familiar with AIPAC knows, that bipartisan pro-Israel group never makes donations to candidates—and is, in fact, legally prohibited from doing so. Despite its name, AIPAC is not a “PAC.”)

Omar and her fellow Muslim congresswoman, Rashida Tlaib led the opposition to the latest congressional legislation against the Boycott-Divestment-Sanctions (BDS) movement, and both have accused Israel of apartheid. Omar dredged up an old anti-Semitic trope that Jewish Israel has “hypnotized” the world, and explained American political support for Israel as being “all about the Benjamins.” (For the latter reference, check your wallet for $100 bills.)

Tlaib is an old comrade of Louis Farrakhan and his obscenely anti-Semitic Nation of Islam organization. She regularly makes accusations that Jews—and their pro-Israel political allies—have “dual loyalty,” an anti-Semitic trope for nearly two centuries.

But the appearance of overt anti-Semitism in the halls of Congress is not a solitary cause for concern—it is a symptom of a broader movement in America and overseas.

There are many reasons offered for the emergence of anti-Semitism in Progressive politics. Central to the issue is the Progressive adoption of the crazed notion called “intersectionality.” In essence this idea says that to be an accepted ally of good Progressives, you must march in intellectual lockstep with all other good Progressives on all issues. Certainly, at a minimum in 2019, you must oppose every action, policy or affinity of President Trump.

Since many leading Progressives today have taken up the cause of the Palestinian Arabs, all Progressives—aka Democratic Socialists—must also take up cudgels against Israel. Since anti-Zionism invariably is coupled to an underlying anti-Semitism, “good” Progressives, by definition, manifest both.

Even the American Civil Liberties Union (ACLU) has joined the anti-Zionist/anti-Israel movement. While the famed civil-rights organization is noted for its hatred of discrimination, it lobbied hard in Congress to defeat the Combatting BDS Act offered in the Senate by Marco Rubio a few weeks ago. It is hard to imagine the ACLU arguing for active discrimination regarding any other people or nation, but the Progressive credo had them falsely equating BDS’ hateful actions with freedom-of-speech issues.

The Rubio-led effort passed in the Senate by a large majority, but 22 of the 23 votes against the Combatting BDS Act came from senators from the Democratic Party.

Nor is left-wing Progressivism only a rising threat in America. Britain’s Labour Party is coping with the resignation of several senior leaders because of Labour leader Jeremy Corbyn’s anti-Semitism, and the similar beliefs and behaviors of so many of his supporters.

And across Western Europe, anti-Semitic incidents are on a sharp increase, admittedly due to a combination of Progressive leadership and swelling Muslim-immigrant minorities.

The stakes are high. If Israel’s bipartisan support in America and elsewhere fizzles, the Jewish state may well find itself even more endangered by the boldness of its adversaries in the Middle East—which now include Russia and Iran. Unflagging Western support for Israel is crucial for avoiding a grim and deadly confrontation in the Golan Heights or elsewhere on the northern Israeli frontier.

We are used to threats to the Jews’ very existence coming from the Far Right. In some areas of Eastern Europe, those threats persist. But, with the exception of the deranged policies of Stalinism, Jews were used to having solid and reliable friends in the Center and Left.

The emergence of a burgeoning Progressive Left movement in Western politics raises the specter of a deadly vise tightening its grip on Israel—and on the many people who love, support and benefit from the achievements of this world-enhancing nation in so many ways.

In talking with friends, family and colleagues, I urge you to emphasize the emerging threat to Israel and Jews everywhere from Progressive anti-Zionist policies. Encourage them to support candidates who are unequivocal in supporting Israel. Explain to them that feelings about President Trump’s actions in behalf of Israel should be appreciated and supported—even if they view his other policies and character as tough to endorse.

And Jewish Democrats should especially be alarmed at the direction that their party is drifting as far as Israel’s durable, reliable bipartisan support in America.