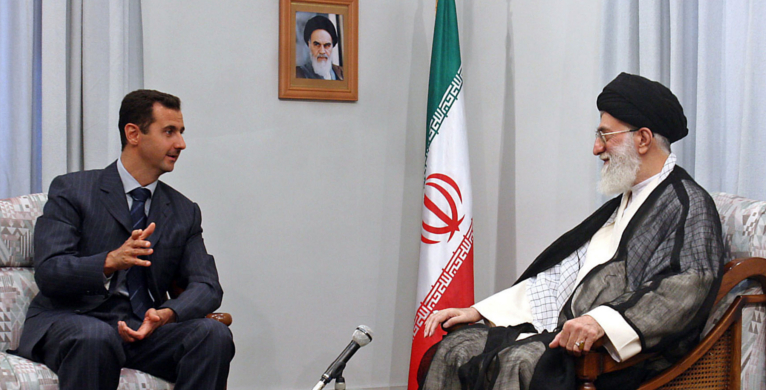 Deadly Dictators: Bashar al-Assad of Syria and Ali Khamenei of Iran oppose Israel’s existence and U.S. influence in the Middle East, so they demand an end to Israel’s sovereignty over the Golan Heights.

Syria abused its 21-year commanding position on the Golan Heights to shell Israeli civilians below with thousands of mortars. Since repulsing Syrian attacks in 1967 and 1973 wars, Israel finally annexed the Golan Heights, keeping it peaceful and secure now for 52 years.

Syria has treated Israel as its enemy since the founding of the Jewish state, waging belligerent wars against Israel in 1948, 1967 and 1973—and losing each one. Israel took possession of the Golan Heights following the 1967 Six-Day War. After consistent refusals by Syrian dictator Hafez al Assad to negotiate peace, Israel asserted sovereignty over the Heights in 1981. As the Syrian state dissolved into civil war and now exists as a puppet state under Russian and Iranian protection, Israeli control over this 695-square-mile territory provides invaluable strategic security on its Syrian border—for itself, as well as for U.S. and world interests. These critical concerns make a compelling case for the United States and other world powers to recognize Israel’s sovereignty over the Golan Heights now.

Israel’s Golan Heights sovereignty keeps U.S. enemies in check. The U.S. has opposed Syrian dictator Bashar al-Assad since he ascended to office in 2000, due to brutal treatment of his own people—including the murder of half a million Syrian civilians—as well as his sponsorship of international terror and consistent opposition to U.S. policies. Today, Syria’s existence depends on its power-sharing with two of America’s greatest enemies, Russia and Iran. With the U.S. withdrawal of troops from Syria, Israel’s sovereignty on the Golan Heights remains our strongest bulwark against Syrian, Russian and especially Iranian aggression.

Israel’s sovereignty over the Golan Heights impedes Iranian imperialism. As the world’s largest sponsor of global terrorism, Iran has mounted an expansionist drive designed to give it a powerful hegemonic land bridge from Teheran through Baghdad and Damascus to Beirut. Both Iran and its Lebanese proxy, the designated-terrorist group Hezbollah, have sworn to destroy Israel, and both have stationed troops and armaments near Israel’s border with Syria. Iran also uses its Syrian bases to ferry advanced missile and anti-aircraft technology to Hezbollah in order to fortify the terror group’s hand against Israel from Lebanon. Israel’s sovereignty over the Golan Heights allows Jerusalem to monitor Teheran’s imperialist misdeeds closely and defeat them before they can further threaten Israel and regional stability.

International law supports Israel’s sovereignty over the Golan Heights. While international law prohibits the acquisition of territory through aggressive conquest, it is universally agreed that Israel’s control of the Golan Heights was the result of a defensive war. When Israel defeated Syrian belligerence in 1967, no international strictures against defensive conquest existed. What’s more, the United States has even recognized territory seized in aggressive wars, such as the Republic of Vietnam’s sovereignty over both the north and south of the country, and India’s illegal seizure of the Portuguese territory of Goa.

Syria’s Assad regimes should be punished for warmongering.  Syria has been one of the most brutal and bloody nations in the Middle East, having engineered the assassination of former Lebanese prime minister Rafic Hariri, used outlawed poisonous chemicals to kill its own people, and committed such war crimes as torture and bombardment of its civilians. In addition, Syria has waged unprovoked war against Israel three times. To insist on return of the Golan Heights to Syria would reward the evil of the Assad regimes—whereas recognizing Israel’s sovereignty would be a powerful form of justice.

Syria’s civil war and subsequent domination by Russia and Iran have turned the Arab nation into one of the most unstable in the Middle East—and likely to remain so for generations to come. In addition, Syria has steadfastly refused to consider peace with Israel in exchange for return of the Golan Heights. Israel has now controlled the Golan Heights for 52 years—more than twice as long as Syria’s 21 years. Whereas Syria’s reign over the Golan Heights was marked by constant attacks on neighboring Israel, Israel’s rule has ensured peace and stability.  It’s time for the U.S. to recognize Israel’ righteous, legal and strategically critical sovereignty over the Golan territory.