FLAME
X
Put text, tables or any other HTML contents here, as you would put in any other HTML page. ..... and more.
Skip to content
Home » New opportunity opens for the Palestinians: Will they seize peace and prosperity . . . or let it slip away again?
The ICC’s political attack on Israel makes a mockery of international lawJacques Gautreaux2021-02-15T11:35:39-07:00 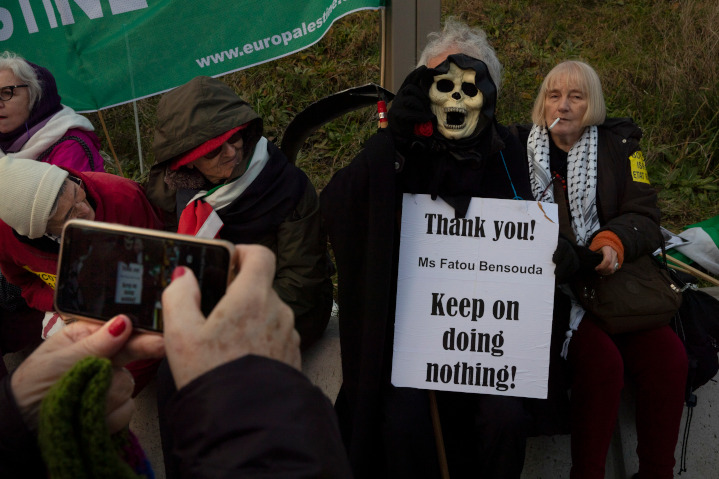 The International Criminal Court has recently been pressured to prosecute more non-African nations. ICC Chief Prosecutor, Fatou Bensouda has responded to protesters like those in the photo by illegally targeting Israel and the U.S., which are not signatories to ICC jurisdiction.

The recent pre-trial chamber of three International Criminal Court (ICC) judges, which ruled two to one that the court has jurisdiction to investigate potential war crimes by Israel, is a classic example of an international institution debasing and delegitimizing itself in the service of an anti-Israel agenda.

In short, the ruling gave lie to any presumption the ICC is a legal body, exposing its raw political purpose.

The ruling centered on whether “the Court’s territorial jurisdiction in the Situation in Palestine, a State party to the ICC Rome Statute, extends to the territories occupied by Israel since 1967, namely Gaza and the West Bank, including East Jerusalem.”

As the dissenting judge noted, the ICC’s majority conclusion ignores international law and conventions, as well as its own rules. It is thus both a non-legal and an illegitimate ruling.

However, the State of Israel, like the United States, is not a signatory to the Rome Statute, which established the court and its jurisdiction, and thus is not a “Member State,” so none of the legal criteria are met. The worry about joining the Rome Statute was that the ICC would be used as a tool for “Lawfare” against democracies, like Israel and the U.S., a concern borne out by this decision and a decision in 2020 to authorize an investigation against American soldiers in Afghanistan.

Despite the ICC’s ruling, there exists no “State of Palestine,” since it does not meet the basic criteria of statehood. The Palestinian Authority does not exercise complete control over any territory and has only partial control over a small percentage.

More importantly, from a legal standpoint, the global standards for Palestinian statehood have not been met within recognized international institutions. The United Nations Security Council provides official recognition for new states, and in 2014, the Palestinians failed to pass a resolution to recognize it as an independent state. In 2012, the UN General Assembly passed a resolution providing the Palestinians with a “non-member observer state” status in the United Nations, but as with all General Assembly resolutions, it is an advisory and not binding opinion.

The pre-trial chamber should have understood that the territories that were the subject of the Palestinian referral to the Court are already under an agreed and internationally accepted dispute-settlement and negotiation process—the Oslo Accords and other subsequent agreements.

Thus, by any legal logic, the judges should have rejected the principle behind the proceedings itself, rather than attempt to prejudge and undermine the outcome of the negotiating process by determining that there already exists sovereign Palestinian territory.

Moreover, this decision was a derogation of the ICC’s responsibility and its idealized role to act as an independent court in order to go after real human-rights abusers. As Alan Baker, an expert in international law states: “What was intended to be an independent juridical body devoted to preventing impunity enjoyed by the most serious and atrocious war criminals, by bringing them to justice, is now being politically manipulated against the one state that since the early 1950s has consistently advocated the establishment of such a body, the State of Israel.”

Israel’s Attorney General Avichai Mandelblit published a 34-page-long legal opinion on the matter before the decision and stated that by turning to the ICC, the Palestinians were “seeking to breach the framework agreed to by the parties and to push the Court to determine political issues that should be resolved by negotiations, and not by criminal proceedings.”

Importantly, the judges appeared to give absolutely no weight to Israel’s legal and legitimate claims to the territories in question, whether the Balfour Declaration, the League of Nations Mandate, or the UN Partition Plan of 1947. Furthermore, the rights of the Jewish people under the Mandate were preserved by virtue of Article 80(1) of the UN Charter, the inclusion of which was advanced precisely by those supporting the establishment of a Jewish national home in Palestine.

To make this travesty even starker, there are other similar cases that were ended precisely because of the same issues raised above. The ICC Prosecutor has repeatedly stated that it has no jurisdiction over China because it is not a signatory to the Rome Statute, despite being asked to investigate it by numerous parties in recent years.

It is for these and a host of other reasons, that the ICC’s legitimacy has taken a battering with this decision. Germany, Australia, Austria, the Czech Republic, Hungary, Uganda, and Brazil, are just some of the Rome Statute signatory nations which have slammed the decision of the pre-trial chamber.

At least the dissenting judge, Peter Kovacs, brought some light and truth to the proceedings when he wrote in his lengthy decision that it has “no legal basis in the Rome Statute, and even less so in international law,” as well as noting that “acrobatics with provisions of the Statute cannot mask legal reality.”

While we are still a long way from an actual investigation and trial of senior Israeli officials, these initial steps amply demonstrate that there is an agenda among ICC officials to prosecute Israel, despite there being little to no legal justification to do so.

I hope you will point out to friends, family, colleagues and your elected representatives that unfortunately the ICC has become just one more international institution that deems its agenda against Israel to supersede its own mandate—which is legal justice, not political propaganda. Rather, the ICC has demonstrated its utter incompetence in the legal realm, while creating a global publicity storm to support crass political motivations.