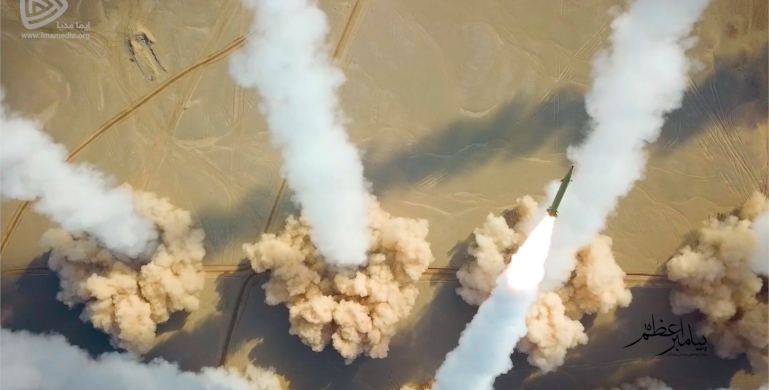 Iranian government photos of a missile test in January demonstrate that the Islamic Republic is arming itself to the teeth. Iran’s intercontinental missiles will be powerful enough to deploy nuclear bombs to targets in the Middle East, Africa, the Mediterranean and Asia.

No Fool’s Deal with Iran

Any new agreement with Iran must halt its development of weapons of mass destruction and its sowing of terror against U.S and our allies in the Middle East.

While the Biden administration wants to reengage with Iran, it must avoid the errors of the 2015 deal—which allowed Iran to cheat, gave it a path to a nuclear bomb, and failed to stop Iran’s development of long-range missiles and its belligerence against Israel and Arab Gulf states.

“The U.S. is under zero pressure to make a deal with Iran”

As the world’s greatest exporter of terror—and militantly anti-American—Iran stands as one of the greatest threats to the United States and the global community. This danger is underscored by Iran’s threats and outright attacks on its Middle East neighbors, as well as its bellicose actions against American assets and allies. Of course, the gorilla in the room is Iran’s unceasing drive to fortify its ambitions with nuclear weapons. While it makes perfect sense to bring Iran to heel and curb its imperial aspirations, any U.S. strategy to that end must address the full scope of Iran’s misdeeds.

Why the first Iran Deal failed.  The 2015 Joint Comprehensive Plan of Action (JCPOA) fell short on four key points. First, it failed to prevent Iran’s cheating, lacking a system of immediate, on-demand inspections. Western intelligence showed the Islamic Republic had lied about its past nuclear weapons programs and its continued nuclear development. Second, Iran continued to wreak havoc in the Middle East, using its $32 billion “signing bonus” from the U.S. to step up its colonization attempts in Lebanon, Syria, Iraq and Yemen. Iran also continued to threaten Israel from its Syrian border, attack U.S. vessels in the Gulf of Hormuz and mount missile strikes against a Saudi Arabian oil refinery. Third, the JCPOA did nothing to stop Iran’s intercontinental missile program, which will allow it to attack nations thousands of miles from Teheran with nuclear bombs. Finally, most tragically, the JCPOA failed to halt Iran’s nuclear weapon development, but only slow it—with full release of restrictions after 15 years—now just some 9 years away.

How to persuade Iran to make a deal. Experience shows that Iran responds to pressure.  Good news: Biden and his team can seize the negotiating advantage created by new realities in the region. Current comprehensive economic sanctions on Iran have already crippled its economy. Measures taken to destroy key Iranian military and nuclear assets have increased the pressure. Both Israel and the U.S. have mounted cyberattacks on Iran’s nuclear facilities, aided by the elimination of key functionaries in its terror infrastructure, such as the assassination of terror architect Major General Qassem Suleimani, and the mastermind of Iran’s nuclear program, Brigadier General Mohsen Fakhrizadeh. In addition, Israel since 2017 has attacked over 1,000 Iranian and Hezbollah military targets in Syria. Israel has also just entered into historical alliance with Gulf Arab states who also oppose Iran.

These conditions give the U.S. unparalleled leverage in negotiations with Iran. Conversely, we are under zero pressure to enter a new deal. The U.S. should only agree to reduce these sanctions in return for major, verifiable behavior changes from Iran that serve our vital strategic interests.

What the next Iran deal should encompass. Any agreement with Iran should squarely address the pivotal problem: The Islamic Republic is dedicated to spreading a radical Shiite revolution globally. Half steps will not suffice. Thus, the next Iran deal should insist that Iran agree to a complete, permanent halt to its nuclear weapons program. The Biden administration should also ensure that Iran cease its development of intercontinental ballistic missiles capable of delivering nuclear weapons, as required by the 2015 UN Security Council Resolution 2231. Finally, Iran must halt colonization of its neighbors and other forms of invasive terror. It must cease its funding for foreign terrorists, stop its involvement in regional conflicts and end the violent export of extremist Shiite revolutionary ideology. Needless to say, the U.S. should involve our regional allies most threatened by Iran—Israel and Saudi Arabia—not just Western nations—in formulating the next deal. In addition, unlike the JCPOA, any agreement with Iran should be ratified by Congress.

Slowing Iran down won’t solve the problem—the next deal has to stop it. President Biden has the opportunity to create the greatest peace ever in the Middle East, by definitively taming Iran’s ambitions. He should take advantage of new global realities—such as the Abraham Accords and Iran’s current economic and political weakness—to insist on a deal that truly makes the region and the world a safer place.