FLAME
X
Put text, tables or any other HTML contents here, as you would put in any other HTML page. ..... and more.
Skip to content
Home » Despite vicious attacks on Israel by the media, the U.N. and Islamists, we continue to win!
The Coming Collapse of Lebanon . . . Crisis or Opportunity for Israel?Jacques Gautreaux2019-11-04T11:07:05-07:00 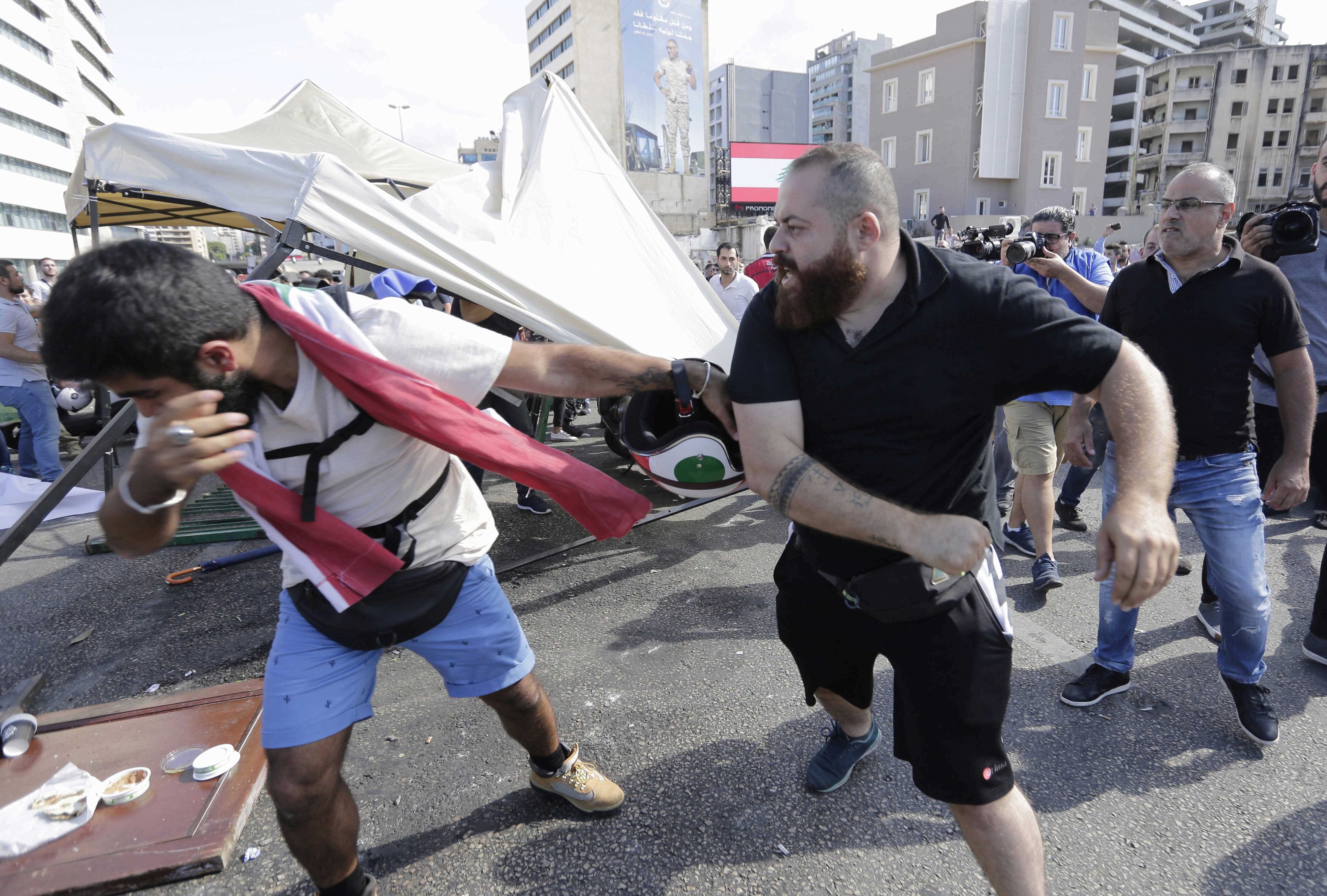 Black-shirted Hizbullah thugs assault anti-government demonstrators in Beirut. The Hizbullah agents tore down and burned protest tents, and sent numerous protesters to the hospital. Hizbullah’s goal: to maintain the corrupt Lebanese power structure over which it has control.

The Coming Collapse of Lebanon . . . Crisis or Opportunity for Israel?

It is imperative that the United States and Israel’s other allies in the western world ensure that Lebanon not become another Afghanistan—a terror-group masquerading as a state. This is a real danger now, and Israel is gravely imperiled by it. America—and all well-meaning peoples—must continue to isolate Hizbullah and its slave-government in Lebanon until sanity and civilization return to “the Paris of the Middle East.”

The government and infrastructure of Lebanon are dominated by the terrorist group Hizbullah, which has already dispatched gangs of thugs to drive masses of demonstrators from the streets of its major cities like Beirut and Tyre. The government of Prime Minister Said Hariri has resigned due to enormous street protests over his utter mismanagement and corruption.

Israel should be worried, because Hizbullah, with its economic and political power threatened, could lash out at its Jewish neighbor to the south as a unifying distraction for its outraged citizenry. A repeat of Hizbullah’s terror-missile war of 2006 would be a far more lethal version of that earlier conflict, which aimed to eradicate the “Zionist entity” on Lebanon’s southern frontier.

Since Hizbullah is a wholly owned subsidiary of Iran and Iran’s terrorist Revolutionary Guard, Iran can be expected to play a key role in Lebanese affairs at this critical juncture. And where Iran gets involved, Israel becomes the ultimate target.

Israel has so far tried a leveraging approach that has a shot at getting some positive results from the tumult to its north. Israel has discreetly asked world powers—starting with the United States—to withhold financial aid payments to Lebanon unless the Lebanese government takes immediate action against Hizbullah’s proliferating precision-guided missile upgrades.

Thankfully, America has responded. It has just frozen a $105 million aid payout to Lebanon until the situation becomes clearer. Meanwhile, the Arab Gulf States—wary of Iranian imperialism—are withholding billions that were earlier—and foolishly—pledged to keep Lebanon from falling into the abyss.

Lebanon’s territory already houses 130,000 missiles aimed at Israel, courtesy of Hizbullah. The vast majority of these are primitive and lack much accuracy—which is balanced by the sheer number of missiles aimed at Israeli targets. We saw this in the destruction of the 2006 Lebanese war—when only ten percent of its current armory was available to Hizbullah terrorists.

Under Iran’s tutelage and massive financial support, Hizbullah has been building facilities across Lebanon to upgrade these missiles with greater range and highly accurate guidance systems. Israel has attacked some of these facilities, but they are proliferating like mushrooms and stand to drastically enhance the Lebanese/Hizbullah threat to all of Israel in coming years.

It’s a threat that makes Hamas’ dangerous but unsophisticated missiles from Gaza seem like tinker-toys.

While the entire Lebanese regime is teetering on collapse from completely internal ineptitude and corruption, Hizbullah’s chief, Hassan Nasrallah, has—you guessed it!—blamed Israel for the breakdown.

Lebanon—once known as “Paris of the Middle East”—almost destroyed itself in the civil war of 1975-1990. It welcomed Yassir Arafat and his murderous crew, precipitating Israel’s invasion to drive the PLO terror group out of its northern backyard.

The government and infrastructure of Lebanon now includes representatives from all of the warring factions of old, balancing Sunni and Shiite, Druse and Christian. But dominating them all is the ruthless Hizbullah, which is, by far, the strongest faction politically and—above all—militarily. It has used political assassinations to consolidate its power in Lebanon, while the impotent official Lebanese Army looks on. And Hizbullah’s militias were crucial in securing victory for the brutal Assad regime in Syria—doing much of Iran’s dirty work.

A United Nations force, UNIFIL, was charged with assuring that Lebanon (i.e., Hizbullah) didn’t re-arm after the 2006 war with Israel. Predictably, UNIFIL has been neutered by Hizbullah—and the corrupt Lebanese government—and the missile threat to Israel is now ten times what it was, and growing in size and precision on a daily basis.

The unfortunate Lebanese populace has seen banks closed for two weeks, and its currency devalued by 25%, almost overnight. ATMs are either closed, or not dispensing dollars—the preferred secondary currency in Lebanon for decades. Electricity is cut off daily—and the more politically-connected Lebanese all own private generators.

Leading politicians of the various sects and factions utterly control the banking sector, and charge their own government usurious interest for the gigantic public debt: Lebanon’s national debt is over 150% of its GDP, and ongoing deficits are monstrous.

The corrupt kleptocracy that runs Lebanon is led by Hizbullah, which siphons massive amounts of tax money for the growth and lethality of its anti-Israel arsenal.

In discussions with friends, family and colleagues, emphasize to them that with the publicly demanded collapse of the Lebanese regime, Hizbullah, with its guns, missiles, battle-hardened militias, and uncompromising anti-Israel philosophy, stands to become identical with “Lebanon.” Explain that it’s vital that America do all it can to prevent a near-inevitable war as Hizbullah becomes both endangered and emboldened by the mass demonstrations that threaten the hapless regime in Lebanon.