FLAME
X
Put text, tables or any other HTML contents here, as you would put in any other HTML page. ..... and more.
Skip to content
Home » New opportunity opens for the Palestinians: Will they seize peace and prosperity . . . or let it slip away again?
Surprise: Anti-Semites resent the IHRA Definition of AntisemitismJacques Gautreaux2021-01-31T17:20:47-07:00 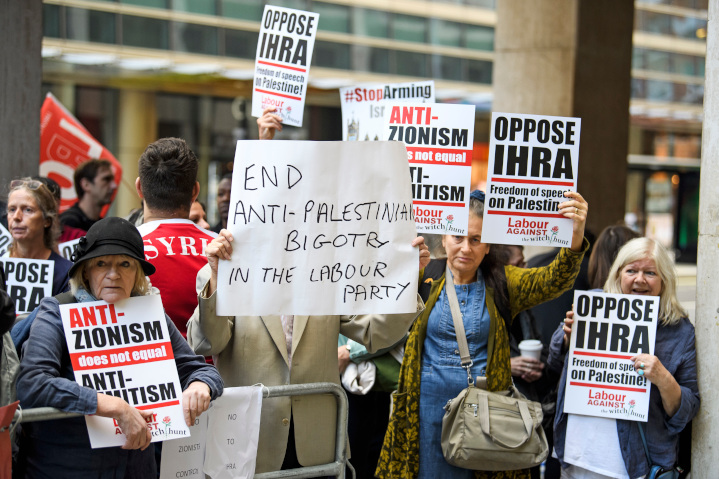 Protestors against the International Holocaust Remembrance Alliance Definition of Antisemitism falsely assert the definition restricts free speech and criticism of Israel—though it does indeed characterize denial of Jewish rights to self-determination and a Jewish state as anti-Semitic.

Remarkably, during a week when we commemorate International Holocaust Remembrance Day, enemies of the Jewish people—and especially of Israel—have mounted a vicious attack on a definition of Antisemitism adopted by the International Holocaust Remembrance Alliance (IHRA), an organization representing 34 member states, including the U.S., Canada, the UK and most European nations.

That the IHRA Definition is an honest, painstaking effort to reach a consensus view on what specifically constitutes Jew-hatred doesn’t daunt Israel’s enemies, who fear its power. They object to the definition, as follows:

“Antisemitism is a certain perception of Jews, which may be expressed as hatred toward Jews. Rhetorical and physical manifestations of antisemitism are directed toward Jewish or non-Jewish individuals and/or their property, toward Jewish community institutions and religious facilities.”

The rest of the definition is full of examples which can be used as illustrations of when something is anti-Semitic.

Antisemitism is a unique form of prejudice that has permeated all levels of society and rages at both ends of the ideological spectrum, whether far-Right or far-Left. It has been called “the oldest hatred” because it is a form of hatred that predates almost all others, especially in the West.

Unfortunately, there has never been a definition of Antisemitism before because of resistance by those who might fall under its rubric.

Jews are unique in being one of the few victims of racism in Western society where the boundaries of what constitutes hate are set by the haters themselves and not the victims.

However, in 1993, a black teenager Stephen Lawrence was brutally murdered in a racist attack in London. During the subsequent inquiry into the murder and its ramifications, the official inquiry defined a racist attack as “any incident which is perceived to be racist by the victim.” This means the definition of a racist attack is how the victim perceives it, not how the perpetrator does.

According to this formulation—which is now widely accepted in legal circles in the UK and generally in the United States— Jews should be allowed to define whether an attack against them is a hate crime or not.

For too long, what constitutes Antisemitism has been defined by those who perpetrate it, its boundaries decided by those who defend them. They know the lack of a definition means that anti-Semites will continue to act with immunity and impunity.

In many cases, anti-Semites try to turn the tables, accusing the accuser. “The Livingstone Formulation”, named after the notoriously anti-Semitic former Mayor of London, is a “response to an accusation of antisemitism,” wrote David Hirsh, the man who coined the term and a lecturer at the University of London, “which enables the user to refuse to engage with the charge made. It is a mirror which bounces back an accusation of antisemitism against anybody who makes it. It contains a counter-charge of dishonest Jewish (or ‘Zionist’) conspiracy.”

Since some of the examples focus on attacks on Israel that cross the line into Antisemitism, this has raised the malicious and false accusation that the definition stifles debate about the Jewish state. It clearly does not.

It is only considered Antisemitism when a person or institution steps into territory whereby they delegitimize, demonize or subject Israel to double standards. (The Three D’s formulated by Natan Sharansky). Some examples of this are:

• Denying the Jewish people their right to self-determination, e.g., by claiming that the existence of a State of Israel is a racist endeavor.

• Applying double standards by requiring of it a behavior not expected or demanded of any other democratic nation.

• Using the symbols and images associated with classic antisemitism (e.g., claims of Jews killing Jesus or blood libel) to characterize Israel or Israelis.

• Drawing comparisons of contemporary Israeli policy to that of the Nazis.

In other words, the overwhelming majority of criticism about Israel and its policies will not fall under the rubric of Antisemitism. Those who claim that has a “chilling” effect and is an attempt to repress speech about Israel cannot show a single example of when the IHRA Definition was used to stifle debate. This is a ‘red herring’ issue raised by some in bad faith, but unfortunately, many, also in good faith.

Though the IHRA Definition identifies actions of on both the Left and Right as anti-Semitic, the issue has recently become politicized and weaponized against Jews, characterized as an act of bad faith or an attempt to stifle debate about Israel.

For example, the Progressive Israel Network recently issued a joint statement in opposition to adopting the universal definition. “We are thus obligated to share our concerns about ways in which the effort to combat anti-Semitism is being misused and exploited to instead suppress legitimate free speech, criticism of Israeli government actions and advocacy for Palestinian rights,” the statement read, repeating the false accusations of those who oppose defining Antisemitism.

Deplorably, a large number of those who oppose the definition include leftist anti-Zionist groups with Jewish leadership, such as J Street, New Israel Fund, Peace Now and IfNotNow. Dave Rich, Director of Policy at the Community Security Trust and a leading expert on left-wing antisemitism, argues that these accusations rest on a ‘misrepresentation of what the definition says and does’, ‘unevidenced claims’ about its impact, and confusions about its legal status and power.

Defining Antisemitism is absolutely essential to fighting it. It places a line between what is legitimate and what is hate speech, including incitement about the Jewish people and the Jewish State.

The IHRA definition exposes those who merely use attacks on Israel and Zionism as a politically correct substitute to attacking Jews. If we look at such accusations, they generally follow the same ancient motifs of Antisemitism that have been used against Jews throughout the centuries.

A prime example is U.S. Representative Rashida Tlaib’s latest accusation—republished by many news media—that Israel is an apartheid state because it “refuses” to provide Covid-19 vaccinations to Palestinians. Of course, Palestinians live under the exclusive healthcare jurisdiction—including vaccinations—of the Palestinian Authority, which also refuses any dealings with the Israeli government. Tlaib’s slander parallels the medieval “blood libel,” which asserted that Jews murdered Christians to use their blood in religious rituals.

I hope you will point out to friends, family, colleagues and your elected representatives that it’s vital—and high time—we fight for the adoption of this definition, so the Jewish People can have what all other minorities currently have: The right to define prejudice and hate used against it . . . the right to identify our enemies clearly and fight against them.

I hope you’ll also take a minute, while you have this material front and center, to forward this message to friends, visit FLAME’s lively Facebook page and review the P.S. immediately below. It describes FLAME’s new hasbarah campaign—which exposes the dangers of restoring the deeply flawed “Iran Deal” of 2015, which the Biden administration says it will try to do.