FLAME
X
Put text, tables or any other HTML contents here, as you would put in any other HTML page. ..... and more.
Skip to content
Home » New opportunity opens for the Palestinians: Will they seize peace and prosperity . . . or let it slip away again?
Strip Ilhan Omar of membership on all House Committees for anti-SemitismJacques Gautreaux2021-02-22T10:21:22-07:00 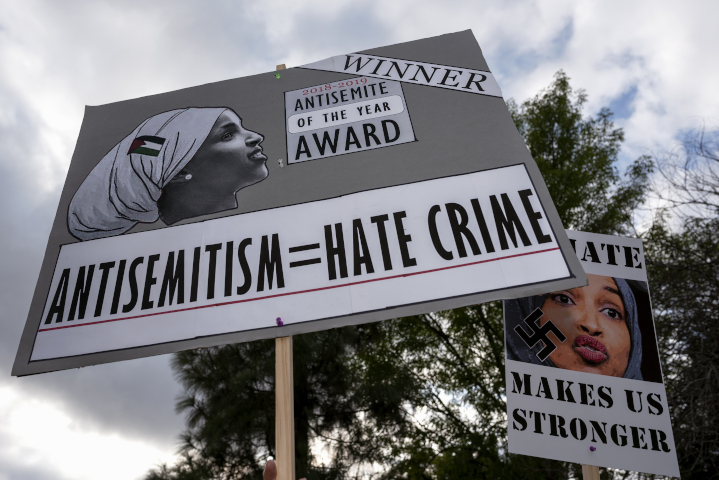 Protestors against U.S. Representative Ilhan Omar call out her history of anti-Semitic accusations against American Jews and the State of Israel. While Rep. Marjorie Taylor Greene faces censure and removal from House Committees for her anti-Semitic comments, House leadership has ignored Omar’s more hateful slanders.

In recent weeks there’s been a lot of media and Capitol Hill support for removing Rep. Marjorie Taylor Greene of Georgia from various Congressional committees for her past comments—including the anti-Semitic assertion that Jews used space lasers to start California wildfires and her sharing of other beliefs held by QAnon.

One can debate the merits of Greene’s case, but House members should ensure that the issue of anti-Semitism and removal of Congressmembers from committees is handled fairly. If Greene is to be condemned for anti-Semitism, surely other elected officials should also come under the microscope, starting with Rep. Ilhan Omar of Minnesota, who was recently named Vice Chair of the House Foreign Affairs subcommittee on Africa, Global Health, and Global Human Rights.

Omar has previously made very problematic—even flatly anti-Semitic—comments in her past, from many of which she has never distanced herself.

In 2019, Omar was named Anti-Semite of the Year by Stop Antisemitism, an organization that works to hold anti-Semites accountable and create consequences for their bigoted actions by exposing the threat that they present to all Americans and showing how their ideologies conflict with American values, morals, and principles. The organization provided six reasons why Omar deserved the dishonor and placed her above notorious anti-Semites like hate-preacher Louis Farrakhan and white supremacist Richard Spencer.

Stop Antisemitism’s list included accusing American Jewry of possessing dual loyalty; alleging that Jews buy their influence with money, infamously stating “It’s all about the Benjamin’s”; accusing Israel of having hypnotized the world; supporting the anti-Semitic Boycott, Divestment and Sanctions (BDS) campaign against Israel; submitting a resolution in the House of Representatives comparing boycotting Israel to boycotting the Nazis; and having her anti-Semitic statements endorsed by infamous neo-Nazi David Duke.

The organization also mentioned Omar’s refusal to retract or regret many of her anti-Semitic comments or repudiating the backing she receives from the Council on American-Islamic Relations (CAIR), which is connected to the Muslim Brotherhood.

Omar has stood by many of these comments, even when she was called out on them by her own Democratic leadership. When Rep. Nita M. Lowey politely asked her to retract her anti-Semitic trope on accusing Jews of dual loyalty, Omar responded, “I should not be expected to have allegiance/pledge support to a foreign country in order to serve my country in Congress or serve on committee.”

The backlash to these and other comments Omar has made was so strong that in March 2019, the House passed a resolution condemning anti-Semitism and other forms of hatred. However, even this vote was politicized by Omar and other far-Left Democrats who did not want to focus on anti-Semitism, even though there had been a significant rise in hate attacks on Jews in the U.S.

It should be remembered that only a few months before, a mass murder of 11 Jewish worshippers at the Tree of Life Synagogue in Pittsburgh had been perpetrated, and another attack on Jews took place in Poway, California shortly after the vote.

Interestingly, Omar is far weaker on issues closer to home, often displaying her rank hypocrisy. In July 2019, Omar was asked at a conference of the Muslim Collective for Equitable Democracy, whether she was willing to make public statements condemning female genital mutilation (FGM). Rather than make the statement, which should be easy for most Americans in the 21st century, Omar attacked the questioner and called the question “appalling.”

It is an issue Omar should not take lightly: According to the Centers for Disease Control and Prevention, a disproportionate number of girls at risk of FGM in the United States live in Omar’s Fifth Congressional District in Minnesota, which includes the largest Somali diaspora in the United States.

Furthermore, in October 2019, Omar was the only Democrat representative to vote against a bill to impose sanctions on Turkey over Erdogan’s invasion and occupation of northeast Syria, and their attacks on U.S. Kurdish allies in the region, as well as abstain on a separate bill to recognize the Armenian genocide. For someone so vocal about Palestinian statehood and so-called “human rights abuses” by Israel, Omar showed a hypocritical lack of solidarity with the Armenian struggle for recognition and the Kurds’ long and bloody battle for independence.

In other words, Omar’s commitment to human rights and national rights is subjective and tribal. She is happy to accuse Israel and the Jewish people for all manner of invented aspersions, but ignores similar offenders when it suits her agenda. She will not even stand up for those in her community who suffer under a repressive mutilation.

How can Omar thus continue as the Vice Chair of the House Foreign Affairs subcommittee on Africa, Global Health, and Global Human Rights? If she continues in this position, she will use it to continue spreading hate against the Jewish State and the Jewish people, while excusing atrocities closer to home.

Any member of the media or the House of Representatives who believes Rep. Marjorie Taylor Greene should be penalized by loss of House committee membership for anti-Semitic comments cannot cast a blind eye on Rep. Ilhan Omar, whose transgressions are arguably more offensive—and certainly more frequent—than those of Greene.

I hope you will point out to friends, family, colleagues and your elected representatives that regardless of Greene’s outcome, it’s time to remove Omar from all her House committees—including the Budget Committee, the Foreign Affairs Committee and the House Education and Labor Committee.

Anti-Semitism is anti-Semitism, regardless of party affiliation or ideology. There needs to be one standard for all elected officials.