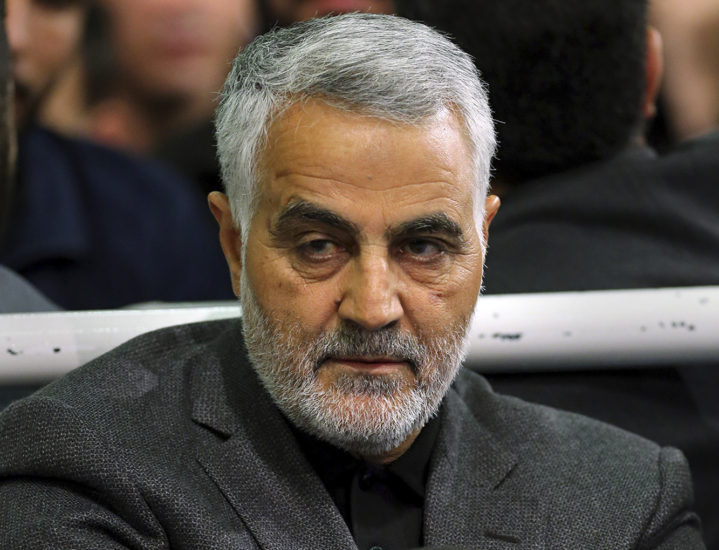 Quds Force General Qassem Soleimani, who was killed by an American drone attack. Although he looks pretty glum, everyone else around the world should be cheering . . . especially Israelis and Americans.

In the immediate aftermath of President Trump’s killing of Iranian Quds Force General Qassem Soleimani, the media were aflame with predictions that World War III was imminent. Instead, it now seems likely that his well-deserved death has opened up untold possibilities for Middle East peace.

The general’s abrupt departure from this mortal coil defused the rash brinksmanship of the Iranian leadership, and removed the primary provocateur of so much violence and misery in the Middle East. Israel may ultimately benefit the most from his removal.

Soleimani had a special place at the top of the Ayatollah’s theocracy. He and his Quds Force had the specific responsibility to spread Iran’s power throughout the world—and particularly the Middle East. His organization, Quds Force, is so called because “Quds” is the Arabic name for Jerusalem, and that city is an ultimate target of Iran’s terrorist game-plan. The “liberation” of Jerusalem, after all, would mean the utter destruction of the “Little Satan”—Israel.

As Julian Reichelt, the editor-in chief of Germany’s Bild newspaper, wrote, “President Trump has freed the world of a monster whose aim in life was an atomic cloud over Tel Aviv.”

Soleimani’s portfolio was worldwide in scope, but his principal efforts were directed toward establishing Iranian hegemony in the Middle East. To this end, he had an active hand in every conflict wracking the Middle East for decades. If there was trouble to make in Syria, Iraq, Lebanon, Yemen or anywhere else, Soleimani was the principal troublemaker.

Israel was, of course, an obsession in the eyes of this man. He was the principal architect, funder and orchestrator of the north-south pincer situation that Israel now confronts. In Lebanon to the north, Iran’s proxy Hizbullah is a terror organization with over 100,000 missiles aimed at Israel. Through Soleimani’s expertise, Hizbullah now rules Lebanon politically as well as militarily.

In Gaza to the south, Hamas is a major beneficiary of Soleimani’s funding and his provisioning of smuggled armaments, including the ubiquitous rockets that have tortured southern Israel for over a decade. But—as if to illustrate Soleimani’s bloodthirsty intentions—his first love in Gaza was the even-more radical terror group Palestinian Islamic Jihad. Islamic Jihad, the number two military force in Gaza, is even more committed to reckless terror than Hamas.

Soleimani’s exploits in Iraq and Syria are well-covered in our media. Essentially, Syrian President Bashar Assad continues to rule only because of Soleimani’s efforts on his behalf. The Iranian general has brought in terror proxies from Lebanon and other areas to do Assad’s dirty work in putting down the civil war in Syria, and in crushing the equally loathsome ISIS insurgency. In fact, Soleimani’s fingerprints are all over every human-rights abomination in Syria, including his genocidal action against the rebel-held city of Aleppo.

Soleimani’s control of the Assad regime in Syria is matched by his similar successes in Iraq. Iraq, like Lebanon, Syria and Yemen, is now effectively an Iranian puppet-state thanks to Soleimani’s bloody efforts.

Finding anyone to replace him in sheer savagery and competence could be an impossible job for Iran’s Ayatollah Khameini. Other senior key Iranian proxy leaders were also wiped out in the American drone attack. At a minimum, the planning, coordination and execution of Iran’s nefarious plans have been disrupted in a major way. This can only be a positive development in the Middle East.

If Lebanon’s Hizbullah is stymied in building factories to upgrade its rockets with precision guidance systems, Israel will be the major beneficiary. If expeditionary Iran-proxy Hizbullah militias are disrupted in encroaching on—and threatening—Israel’s Golan Heights from Syria, the threat level to Israel will be mitigated.

And if Hamas and Islamic Jihad have a money crisis and a shortage of terror rockets to lob at Israel’s south, it will be a very welcome development.

Lacking Soleimani’s potent tentacles, Iraq and other countries may have the opportunity to climb out from Iran’s oppressive and murderous machinations.

In other words, Soleimani’s removal opens up many possibilities for good things to follow, particularly for Israel.

As for the dire downside predicted worldwide upon Soleimani’s elimination, the Iranians have so far disappointed. There was no massive explosion of anti-American—or anti-Israel—violence and military conflict. This should give the world some measure of just how invincible Iran is when confronted with superior intelligence and firepower. Knowing that massive American—or Israeli—counterattacks would be forthcoming, Iran decided to back off and just lob some missiles at a couple of Iraqi bases with American soldiers . . . none of whom was harmed.

After years of letting Iran’s Quds Force have a relatively free hand in exporting chaos around the world, perhaps the United States and others will conclude that a passive approach to Iran’s infamies has only invited more infamies. Perhaps America’s bold move in eliminating Soleimani has exposed Iran’s vulnerability to forceful, dramatic action by its targeted enemies, including America and Israel.

Israel, and her supporters, should express their optimism in discussions with friends, family and colleagues in the wake of this action by America against Iran. Explain that U.S. interests, as well as Israel’s precarious situation, almost surely will be improved now that the main architect of Middle East terror and aggression has been removed from the battlefield. Explain also that any disruptive action to the supply chain, finances and strategic management of Hamas, Islamic Jihad and Hizbullah is likely to yield good results for Israel’s security—and for peace in the region.