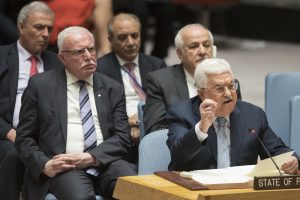 Mahmoud Abbas with his Arab posse at the United Nations, pursuing an “internationalization strategy” to gain recognition of a Palestinian state and avoid direct negotiations with Israel. (AP Photo/Mary Altaffer)

For almost 10 years now, the Palestinian Arabs have been pursuing an “internationalization strategy.”

Instead of negotiating with Israel, the Palestinian Authority (PA) has been seeking recognition from world bodies—mostly U.N. affiliates, such as UNESCO. Their goal has been to achieve three victories on the cheap: 1) establishment of a Palestinian state, 2) with borders based on the 1967 armistice lines, 3) with a capital in eastern Jerusalem.

The more international bodies that recognize “Palestine” and its false narrative that Palestinian Arabs are the indigenous people of the Holy Land, the more Israel is delegitimized and the Jewish state will be seen as party responsible for a negotiating deadlock.

This is despite the fact that the Arabs have already turned down two serious land-for-peace deals from Israel and refuse to this day to return to the negotiating table. Nonetheless the Palestinian strategy has been modestly effective.

In addition to the Palestinians’ acceptance into UNESCO in 2011, a U.N. Security Council resolution in December 2017—thanks to the Obama administration’s failure to veto it—declared as illegitimate Israel’s claim of Jerusalem as part of its territory and its capital.

Fortunately, the U.S. Congress has taken steps—through a bipartisan majority—to revoke funding of any “specialized agencies” of the U.N. that accord the Palestinian Liberation Organization the same status as member states, or any “affiliated organizations” of the U.N. that grant full membership to any organization that does not have the internationally recognized attributes of statehood.

Now the Palestinians—and their U.N. collaborators—have done it again. In May of this year, the PA sought and received membership in two UN organizations—the United Nations Conference on Trade and Development, and the Organization for the Prevention of Chemical Weapons. In 2016, the PA also joined the U.N. Framework Convention on Climate Change and the U.N. Convention to Combat Desertification.

So far, the U.S. has failed to cut funding to these four organizations.

Which brings us to this week’s FLAME Hotline-featured article (below), a brief summary of a policy paper by Professor Eugene Kontorovich from Northwestern University and the Kohelet Policy Forum on why the U.S. is obligated to revoke funding for these organizations.

In his report, Kontorovich points out that the Congressional legislation was enacted specifically to prevent the Palestinian internationalism strategy and an “end-run around peace negotiations” with Israel.

I hope you’ll forward this analysis to friends, family and fellow congregants. It will help them understand why President Trump and the State Department should take immediate steps to enforce a funding cut against U.N. agencies that flout American law and foreign policy interests.

The U.S. Must Stop Funding UN Agencies That Admit the Palestinian Authority

In 1990 and 1994, Congress enacted laws requiring the government to cease funding any “specialized agencies” or “affiliated organization[s]” of the United Nations that grant full membership to the Palestinian Authority (PA). These laws have become relevant since Mahmoud Abbas began a campaign to join international institutions as a stepping stone to a unilateral declaration of statehood and a tool for lawfare against Israel. Since 2016, the PA joined four such groups, which nonetheless continue to receive funds from the U.S. Eugene Kontorovich argues that these organizations should be defunded, not only on strictly legal grounds but also as a matter of policy:

“The acceptance of [the PA as a] member state turns these UN agencies into political tools for Palestinian unilateralism, rather than technical agencies dealing with specialized tasks. Moreover, as evidenced by the Palestinian membership in UNESCO, once it is a part of these agencies, the PA will hijack their agendas and divert them to anti-Israel policies and polemics. . . . [I]f the U.S. does not enforce non-waivable statutory measures triggered by PA action, it will lose its credibility as a potential broker of Middle East peace. Any peace plan will require U.S. assurances to Israel in the event the Palestinians take certain hostile measures. Implementing those assurances will always have a cost, a downside. If the U.S. will not abide by its own statutes when doing so might be uncomfortable, it can hardly be expected to do so with mere diplomatic assurances.

“[Furthermore], a failure to implement the funding restrictions will only encourage the PA to step up its “internationalization” campaign. . . . Finally, the UN agencies admitted the PA with full knowledge of the consequences. The UN itself has thus put the promotion of the PA’s agenda above the original goals of these agencies. If mandatory U.S. funding cuts would be destructive to the mission of these organizations, they would not have accepted PA membership. If cutting funding impedes the functioning of these organizations, the solution consistent with U.S. law is not to continue funding, but rather defunding [in order] to pressure the PA to quit the organizations it has already joined.”

To those who would argue that the Organization for the Prevention of Chemical Weapons (OPCW), joined by the Palestinians in May, is too important to be defunded, Kontorovich replies:

“While the U.S. does have a strong interest in OPCW’s inspection and destruction programs, the downsides of PA membership are also greater than for other organizations. The PA will, for example, likely use its new position in the OPCW to trigger international involvement in Israel’s use of tear gas against violent rioters. This is something it can only do as a member. Moreover, if the U.S. does not implement its mandatory defunding in this context, it is likely the PA will be encouraged to seek membership in the even more important International Atomic Energy Agency, creating a serious diplomatic headache for the U.S.”