FLAME
X
Put text, tables or any other HTML contents here, as you would put in any other HTML page. ..... and more.
Skip to content
Home » Despite vicious attacks on Israel by the media, the U.N. and Islamists, we continue to win!
Palestinian Authority Desperately Pursues Suicidal Policies _June 4, 2019Jacques Gautreaux2019-06-03T15:54:42-07:00 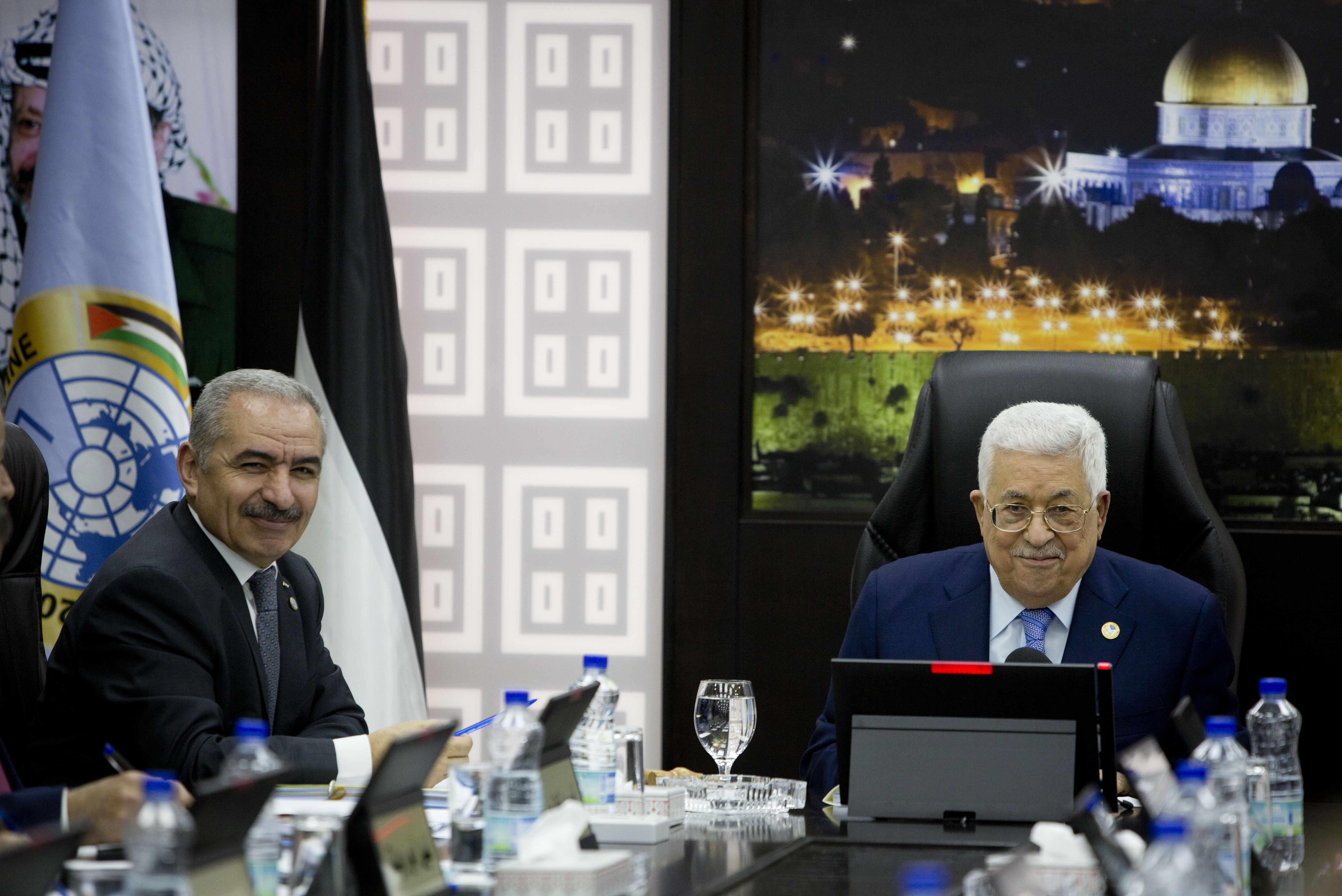 Palestinian President Mahmoud Abbas with Prime Minister Mohammad Shtayyeh, after returning to Ramallah from Cairo where he told his Arab League donors that the Bahrain conference can “go to hell.” Many Arab League diplomats are attending President Trump’s kick-off event for the “Deal of the Century” to aid . . . the Palestinians.

Arguably the most significant and distinctive “contribution” of Palestinian Arabs to human history is the development and introduction of suicide bombing as a terror tactic. Now the Palestinians are employing diplomatic and economic suicide tactics to forestall their increasing marginalization on the global political scene.

Murderous terrorists around the world—from the 9/11 hijackers to the 2008 Mumbai hotel bombers to the latest worldwide atrocities—offer a tip of their keffiyah scarves to the Palestinian creators of terror by suicide.

To emphasize their societal pride in the invention of suicide bombing, the Palestinians give tribute to dead terrorists by naming city squares, sports facilities, college halls and even schools after them. With even more heartfelt generosity to the executors of suicide bombing, large payments are made to their surviving families, and—in the case of those who failed to detonate or were prevented and arrested by Israeli police—substantial lifelong pensions are offered by both Hamas in Gaza and the Palestinian Authority in Judea and Samaria.

Not unreasonably, Israel has major objections to this part of Palestinian policy, known as Pay-for-Slay. Now, since much of the PA’s budget comes from taxes and tariffs that are collected by Israel and then routed to the PA in Ramallah, Israel is not just an onlooker in these terror pensions and payments: Israel, in fact, has been effectively the paymaster for Pay-for-Slay.

A few months ago, Israel announced that it would withhold the Pay-for-Slay payments from its remittances to the PA. So Israel recently sent the PA a check for about $150 million, withholding about 6% of the total collected on behalf of the PA.

In high dudgeon, the PA sent the check back to Israel, uncashed. Despite its precarious financial situation—due largely to the cutoff of U.S. aid over the same Pay-for-Slay policy—the PA refused the badly needed money because of its pre-emptive, top-priority policy of incentivizing and paying terrorists to kill Jews.

Due to the PA’s dire financial straits, most of its employees are currently working for half their salaries or less, and much of their civil infrastructure and other projects have been cut to the bone. (Pay-for-Slay remains fully funded, however.)

In short, the PA is nearing financial collapse, and recent polls show that popular resistance to its continued rule is growing rapidly. It is taken as certain that, if elections were held today, Abbas’ Fatah-PLO candidates would be crushed. So would Abbas’ tenure as its currently unelected president and chairman—Abbas is now serving the fifteenth year of his four-year presidential term of office. Hamas might well come to power in Judea and Samaria following Abbas and Co.’s demise, and this is why Israel—the Zionist enemy!—is doing what it can to prop up the current PA and its somewhat-less-murderous leadership.

Just as suicide bombing was the Palestinians’ signal civilizational achievement, political suicide may soon end up being the PA’s signature achievement in government. If there were any viable peace-and-compromise party in the disputed territories, the terror-loving PA’s dissolution would be enthusiastically desired. But there is no visible path forward for the Palestinian people, so they—and we—are stuck with Abbas’ desperate kleptocracy.

So the PA continues its suicidal march. In April, Abbas told the gathered foreign ministers of the Arab League in Cairo—who include many of the PA’s principal Arab donors—that President Trump’s “Deal of the Century” can “go to hell.” This destination is apparently also recommended to the numerous Arab ministers who will be in attendance at the Bahrain confab.

In other words, while the world gathers in Bahrain to figure out ways to keep the PA solvent, spur economic growth in the territories, and offer a ray of hope to the Palestinian people, the PA is embarking on an even greater rejection of any cooperation with Israel or the world on achieving these goals.

If any Palestinian policy program were more economically suicidal than this “disengagement” plan, it would be hard to imagine it. Israel collects most of the PA’s tax revenues—which the PA is already refusing to accept, as noted above.

Israel is in firm control of every inch of the territories’ borders. The PA has neither airports or seaports or roads that lead anywhere but to Israeli border controls. Who will deal with Israeli customs officials—or is the collapsing Palestinian economy going to reject all imports and exports to avoid Israeli “engagement?”

One of the few factors that has stopped the Palestinian economy from going into hyper-inflation and bankruptcy is that the Israeli shekel is the medium of currency. It is not clear how the PA would underwrite a currency of its own or cobble together the financial infrastructure to support that proposed new currency. Who would even trust that currency?

Tens of thousands of Palestinian Arabs are employed in Israel, generally making considerably more than they would in the territories. They represent well over a quarter of the Palestinian workforce, and more than that of income. Who is going to replace those jobs and that income?

With disengagement from Israel—and the rejection of an increasingly large current and future financial-aid scenario—the Palestinians certainly cannot expect prosperity to flow from this lunatic package of plans.

Sane people have long noted the self-defeating nature of Palestinian policies. They have, over the decades, rejected the statehood they claim to crave, despite numerous generous offers. Their only plans for peace hinge on patently unrealizable goals—like the so-called “right of return.”

Their promising economic development after the Oslo Accords was utterly destroyed by their preference for killing Jews in the Second Intifada.

Gaza’s Hamas is no alternative: Remember the destruction of Gaza’s Israeli-built infrastructure after Israel’s withdrawal of every Jew from Gaza. And consider the mountains of international aid to Gaza that is used for nothing but rocket launches and invasion tunnels into Israel.

Perhaps even sane, non-suicidal Palestinian leaders might be found hiding somewhere in those territories. As you discuss the upcoming Bahrain conference, President Trump’s gradually unfolding peace plan, and the PA’s plans to thoroughly disengage from Israel, clarify the great unlikelihood of the Palestinian leadership’s survival, let alone its delivering something good for Palestinians and achieving peace with Israel.

I hope you’ll also quickly visit FLAME’s lively new Facebook page and review the P.S. immediately below. It describes FLAME’s most recent hasbarah campaign-on whitewashing misrepresentations made by the media and, alarmingly, by some politicians, about the insidious Boycott, Divestment and Sanctions (BDS) movement.