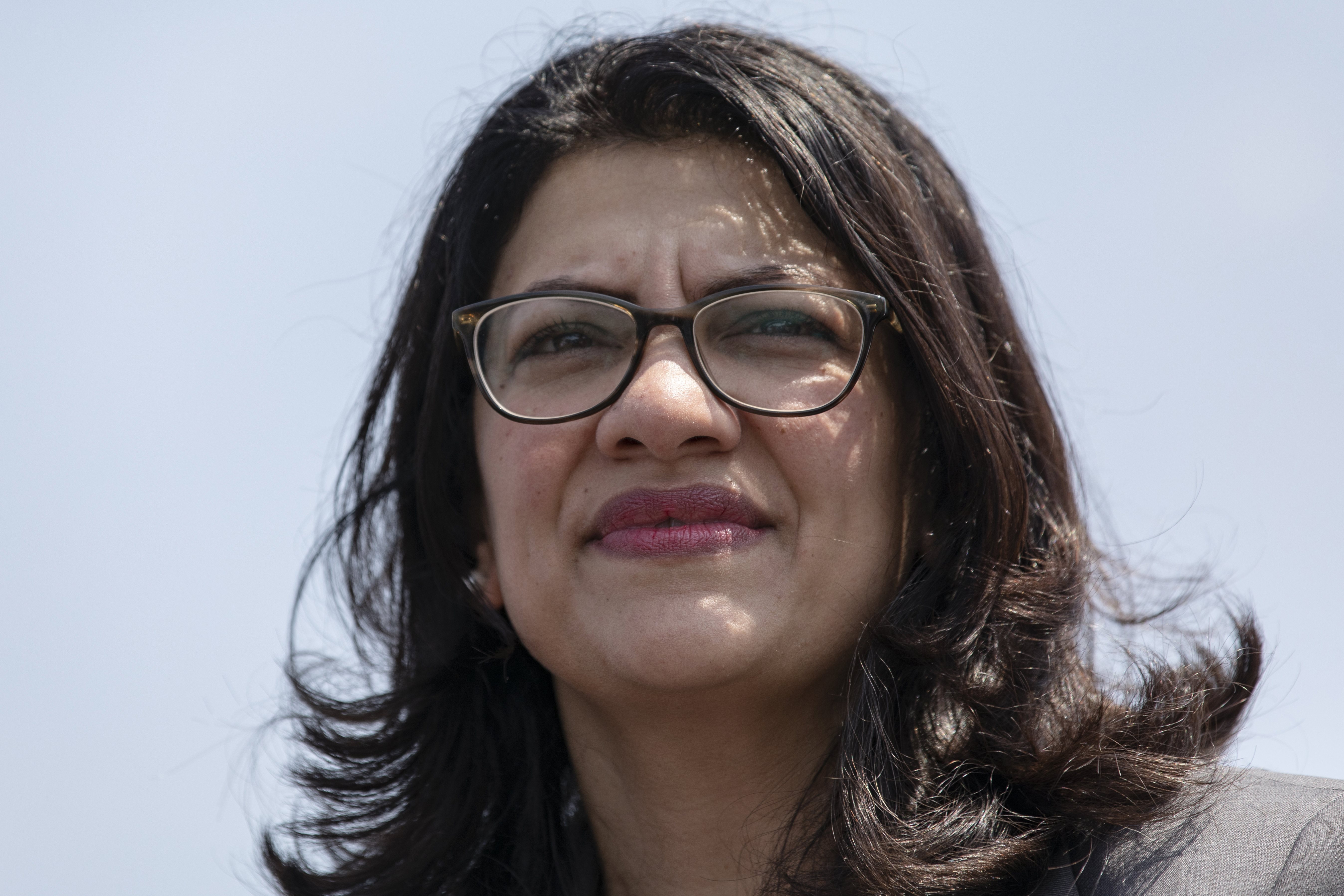 Congresswoman Rashida Tlaib (D-Mich.) has attributed Israel’s birth to Europe’s abuse of her Palestinian Arab brethren: In order to atone for the Holocaust, Europe victimized the Palestinian Arabs by stealing their land for the Jews. This is just one of her vicious lies.

Congresswoman Rashida Tlaib (D-Michigan) made several assertions in her recent interview on Yahoo’s Skullduggery podcast that have justifiably been characterized as anti-Semitic. Like her sister-in-arms Congresswoman Ilhan Omar (D-Minnesota), Ms. Tlaib has a vicious history of anti-Semitic comments, alliances and actions.

She has been recently assailed for implying in the podcast that Palestinian Arabs should share the credit for the creation of the Jewish state. She continued that the suffering of her people was due to the world’s attempt to atone for the evils of the Holocaust at the expense of the unfortunate Palestinian Arab people.

Commentators have argued about what she was really saying on the subject of Palestinian involvement in Israel’s founding. What was clear is that Congresswoman Tlaib trafficked in one of the foundational myths of her Palestinian Arab culture.

Most likely, she honestly believes the historically ignorant nonsense she spouted concerning the founding of the State of Israel and the events of the Holocaust—namely, that Israel’s creation was a European guilt-payment for the atrocities of the Shoah. This pernicious myth is foundational to Palestinian grievances and their view of themselves as hapless victims of callous European colonialists—as well as bloodthirsty Jews, of course.

The truth, however, is that the Palestinian Arabs are victims of themselves, their terrorist leadership, and their treacherous Arab brethren throughout the Middle East.

When the newborn State of Israel emerged in 1948 despite a genocidal pan-Arab war to exterminate it (and its Jewish populace), the Arabs of Palestine desperately sought a victimization model for themselves. Since hatred of colonialist Europe was so widespread, it was to Europe that Palestinian Arabs looked for an external cause of the Palestinians’ self-inflicted devastation in Israel’s victory.

The three principal world powers involved with Israel’s founding were Great Britain, the United States and the Soviet Union. It was they who facilitated the United Nations vote to partition Britain’s Mandate in Palestine in November, 1947.

But the Palestine Partition Plan was not the result of moist-eyed guilt feelings on the part of those powers—which is not to say that they shouldn’t have had those emotions. Each of them had full knowledge of the Holocaust, and each—for its own reasons—had sat back and allowed the liquidation of most of Europe’s Jews.

In fact, Great Britain had been a direct contributor to the catastrophe, as it issued its immigration-restrictive White Paper in 1939, effectively eliminating the only potential haven for Europe’s persecuted Jewish population: Palestine. They did this to favor the cause of Palestinian Arabs, despite their League of Nations/United Nations Palestine Mandate obligation to create “a Jewish national home.”

America certainly didn’t open its Golden Door to the Jews trapped by the Third Reich. Its strict immigration quotas were largely kept in place. Ships loaded with desperate Jews were returned to the killing fields of Europe—including the Saint Louis with its 937 Jewish refugees, which was turned back from Miami.

The Soviet Union—where millions of Jews resided—had seen anti-Semitic purges by its leader, Josef Stalin, throughout the 1930s. (Those purges would resume as soon as World War II ended, and could continue until Stalin’s death brightened the world.)

Yet Great Britain, America and the Soviets voted for the Palestine Partition Plan in the UN’s General Assembly, opening the door for the May, 1948 creation of the Jewish state of Israel. Why would they do that, if not because of guilt for their horrific conduct/inaction in the matter of the Holocaust?

Guilt had nothing to do with it . Great Britain was effectively bankrupted by World War II, and could no longer afford its colonial empire. In particular, Arab violence in Palestine required a massive British expense in terms of both pounds-sterling and people. Great Britain wanted to exert no further efforts or resources to manage the chaos in Palestine.

They just wanted to get out, and their governmental communications show clearly that their leaders fully expected the Jewish Palestinians to be slaughtered in widespread Arab pogroms. Their closest thing to “concern” for the Jews was to capture post-War European Jews risking their lives to reach Palestine and dump them in concentration camps in Cyprus, as was shown in the film Exodus. This, British FM Bevin believed, might spare them the coming sequel to the Holocaust in Palestine.

As for Russia, First Secretary Stalin had his eye on the bigger post-War picture. To further his dreams, anything that would harm Great Britain and create potential Soviet allies anywhere was very desirable. He looked at the leaders of the potential Jewish state, and their left-wing ideology of collectivist kibbutzim and radical commitment to the State, and decided that a Zionist state seemed like potential future Soviet ally. A Jewish state in Palestine could offer Mother Russia Mediterranean ports and be a Soviet outpost in the oil-rich Middle East.

As for America, we must always be grateful to President Truman for overruling his own State Department and backing the Palestine Partition Plan—and, six months later, recognizing the State of Israel. But he too was desirous of having a post-War American outpost in the Middle East as the United States became the next great hyper-power. In addition, courting the Jewish vote in New York for the upcoming presidential election of 1948 was part of his calculation.

The world has never been ashamed of its anti-Semitism, and it certainly wasn’t in 1947-1948. The final proof of this is that when seven Arab armies—including Ms. Tlaib’s Palestinian Arab ancestors—viciously attacked the newborn Jewish state before the ink on its Declaration of Independence was dry, all of the European powers (and America) sat back yet again to watch the slaughter of the residue of world Jewry.

No European or American armies intervened in the bloodbath-to-be. All of these countries maintained their arms embargoes on the Israelis, and passively observed what was expected to be the second chapter of the Holocaust.

Instead, miraculously, Israel survived—to the utter surprise of everyone. As for the Palestinian Arabs, their “brethren” stole the parts of the Palestine Partition Plan that should have become an Arab State of Palestine. Egypt stole Gaza. The Kingdom of Trans-Jordan stole Judea and Samaria, which it renamed the West Bank of the Kingdom of Jordan.

Holocaust guilt and European chicanery against the Arabs had nothing to do with it, Congresswoman Tlaib. The miracle of Israel happened because of totally unromantic great-power calculations, and because the historically supine Jews of Palestine refused to lose again to murderous barbarians.

This false model of Palestinian Arab suffering and its resultant finger-pointing at Europe is one of the most widespread myths about the Middle East. Even President Obama voiced it in his famous Cairo speech of 2009. It wasn’t true then or ever.

In talking with friends, family and colleagues, I urge you to clarify the adversarial Arab role in Israel’s birth and the self-inflicted causes of the Palestinian Arabs’ situation. They should understand that Israel’s creation is not due to European Holocaust guilt, but rather to the long-term, valiant struggle of the Jewish people for the restoration of its national rights in its ancestral home: Palestine. Emphasize that true solutions can never be built on foundational lies.

I hope you’ll also quickly visit FLAME’s lively new new Facebook page and review the P.S. immediately below. It describes FLAME’s most recent hasbarah campaign—on whitewashing misrepresentations made by the media and, alarmingly, by some politicians, about the insidious Boycott, Divestment and Sanctions (BDS) movement.