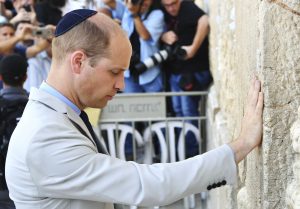 Prince William’s visit to Jordan, Israel and Judea-Samaria (the “West Bank”) last week highlighted a propaganda absurdity of long standing among most Western nations and many mainstream media—namely the mischaracterization of Jerusalem and Judea-Samaria as “occupied Palestinian territories.”

When the question of Israel’s occupation of the disputed territories is debated, its defenders blithely toss out the argument that this contention is supported by international law.

This assertion has been proven false by many scholars. While any discussion of international law can get deep in the bushes quickly, let me lay out succinctly for you (with the kind help of Eugene Kontorovich, professor of international law at Northwestern University) seven facts that absolutely disprove the occupation allegation.

Which brings us to this week’s FLAME Hotline-featured article (below), by Melanie Phillips, one of Israel’s staunchest journalist supporters. Phillips succinctly reviews a new book on the subject of “occupation,” which supports and clarifies many of the points above.

Perhaps most important, Phillips links the accusations of occupation to an increasingly prevalent anti-nationalism sentiment in our society. Thus, questions of right and wrong, evil and good, sovereignty and borders are no longer legitimate reasons for war—and those nations forced to battle over these issues are disdained.

No wonder that tiny Israel, fighting for its life, gets so much criticism from the U.K. the New York Times and the U.N.

I hope you’ll forward this analysis to friends, family and fellow congregants. It will help them understand why accusations of Israel’s presence in Judea-Samaria as “occupation” are a disgraceful misrepresentation.

I hope you’ll also quickly review the P.S. immediately below, which describes FLAME’s latest hasbarah campaign-exposing Palestinian lies intended to dispossess Israel of its rights to a state in the Holy Land. I also hope you agree with and will support this message.

One of the most brazen aspects of Israel’s demonization is the perversion of international law as a weapon.

Israel represents law and justice against those who deny them. Yet it is falsely painted as fundamentally illegitimate and guilty of repeated illegality and breaches of international norms.

Defenders of Israel, including its own government, seldom push back publicly against this. False assertions by the Foreign and Commonwealth Office (ed., FCO, Britain’s equivalent of the U.S. State Department) about Israel’s illegal settlements or the “Occupied Palestinian Territories” are met with silence.

Not surprisingly, this failure to engage has led many perfectly decent people in Britain and elsewhere to believe the Big Lie that Israel is the principal rogue state in the region, if not the world.

A new book sets the record straight. Israel on Trial: How International Law is being Misused to Delegitimize the State of Israel , written by two international lawyers, Matthijs de Blois and Andrew Tucker and published by the Hague Initiative for International Co-operation, comprehensively lays out both the justice of Israel’s actions and the staggering denial of international law by its tormentors.

The FCO is an egregious offender. One of its persistent falsehoods has surfaced in the official itinerary for Prince William’s visit to Israel, Jordan and the Palestinian Authority next week. This implies that Jerusalem’s Old City and the Western Wall are in “the Occupied Palestinian Territories.”

As de Blois and Tucker make clear, the term is false. In law, the territories were never Palestinian and they are not occupied.

In 1922, the League of Nations conferred upon Britain the Mandate to facilitate the creation of a Jewish homeland in Palestine. When Israel was finally restored as a sovereign state in 1948, it inherited those rights to all the land under the Mandate—including Jerusalem and the “West Bank.”

So when Israel took possession of east Jerusalem and the “West Bank” in 1967, “it was taking physical possession of territory that—as a matter of law—already belonged to Israel.”

As for the Israeli settlements, these aren’t illegal either. The requirement for Britain to enable the “close settlement” of Jews throughout the Mandate territories, including the “West Bank” and Jerusalem, has never been abrogated. The argument that the settlements are in breach of the Fourth Geneva Convention rests on a false and perverse reading of that convention. And so on.

Given all this, one might well ask why the British government sticks to these fictions of Israeli illegality. After all, Theresa May is sympathetic to Israel.

One principal reason is surely that the UK is part of a European progressive order for which international law is the expression of its ideology, elements of which are inimical to the security and even the existence of the state of Israel.

Out of the carnage of two world wars grew the core progressive belief: that the western nation state is the source of nationalism, prejudice and aggression, and so any war in its own defense is by definition unjustified.

In place of the nation state should come a new international order based on transnational institutions and laws representing the brotherhood of man: the UN, EU, international law and human rights law.

War must be replaced by law through negotiation, conflict resolution, peace processes. There can be no victory or defeat. Questions of right and wrong, who is the aggressor and who the victim, are irrelevant. In a fight between God and the devil, western progressives would split the difference and call that a triumph.

In Mandatory Palestine, Britain betrayed its legal obligations to the Jews. The FCO has a history of Arabism and antisemitism. Progressive transnationalism seems to have allowed it to progress from all that straight into lawfare against Israel without even passing “Go.”