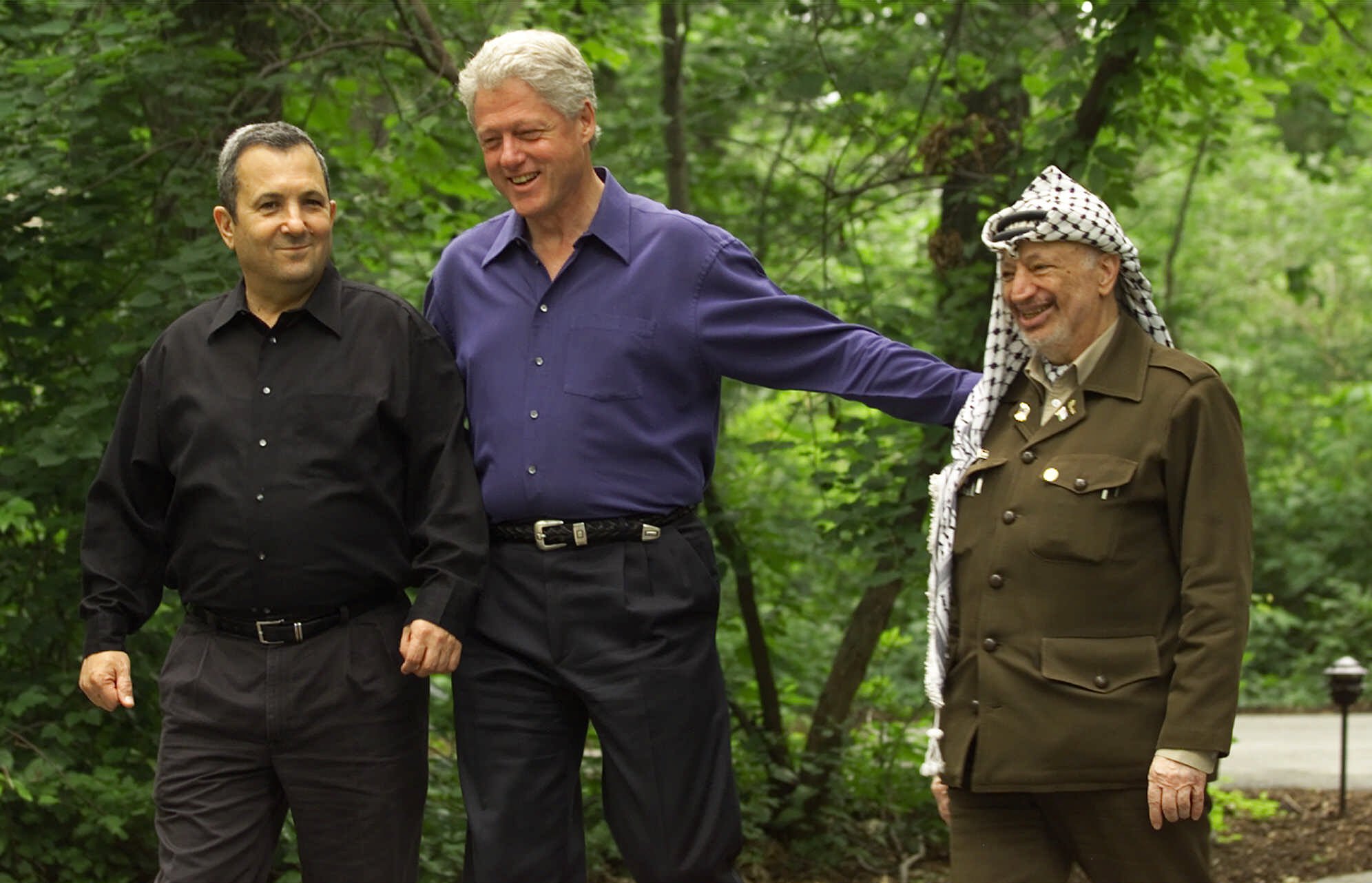 President Bill Clinton, flanked by Israeli Prime Minister Ehud Barak, and Palestinian President Yasser Arafat at Camp David in 2000. Arafat’s only response to the generous offer of a Palestinian state was to unleash the Second Intifada, in which thousands died, including over 1000 Israeli terror victims.

No People Deserve a State Less Than Palestinian Arabs

With President Trump’s peace plan due to be announced in June, there is the unnerving possibility that Palestinian Arabs may take a giant step toward statehood. Such a move would inevitably lead to warfare and bloodletting in the Middle East.

In the absence of a clear path to statehood—which the Trump plan is unlikely to provide—Palestinian Arabs would likely respond in the only way they have known: terror and violence. Yet that violence—which Israel has contained for decades—would pale in comparison to the long-term explosions that would follow statehood (or even its approximation).

Often overlooked, though, is the more profound reality that the Palestinian Arabs have no basis for achieving statehood.

Indeed, when it comes to peoples around the world seeking their own countries, Palestinian aspirations are the most unworthy.

Among the many peoples in the past century seeking national self-determination, we find such groups as the Kurds in Turkey, Syria and Iraq; the Uighurs and others in China; Armenians in Turkey and Kazakhstan; Catalonians in Spain; Bangladeshis in Pakistan; Slovakians in Czechoslovakia; the Quebecoise in Canada; and many others. Palestinian Arabs are seemingly just another people seeking what so many others have sought: independence and a nation-state.

Yet even this designation is problematic since Palestinian Arabs are in no way comparable to these other state-seeking peoples. Comparing their “legitimate national aspirations” to any others is false in every sense—their desire is neither “legitimate,” truly “nationalist,” or even actually “aspirational.”

To begin, consider the legitimacy of their cause from both historical and moral-imperative viewpoints.

Each of the peoples mentioned above—and all others that could be named—base their claims on an ancient ethnic identity and on the restoration of their historical sovereignty as separate political entities. They also point to such unifying and distinguishing factors like a distinctive national language, a distinctive trove of national literature, music and other cultural elements that stretches back centuries; a religious heritage often divergent from their “host” country; cities and farms that their ancestors built. Most of them can also point to a history of oppression and/or colonialism from which they demand freedom.

Perhaps most characteristically, they have sought national emancipation from their current hosts—not the utter destruction of their hosts.

None of these characteristics of legitimate national liberation movements is evident in the struggles of the Palestinian Arabs. Their two political leaderships—the Palestinian Authority in Judea and Samaria, and Hamas in Gaza—are both pledged to Israel’s annihilation.

Whereas other legitimate national movements can point to heroic leaders of the past—emperors, kings, presidents—Palestinian Arabs can not go much further back than Yasser Arafat, a murderous terror-boss who never ruled anything more than a gang of killers. Arafat wasn’t even a native Palestinian Arab: He was born Egyptian and was elevated to his lofty status in 1964 by President Gamal Abdel Nasser of Egypt.

Although Arafat’s terrorist cabal was called the Palestine Liberation Organization (PLO), its goal was not to liberate “Palestine from the river to the sea.” When the PLO was founded—three years before the Six-Day War—what we now call “the territories” were part of the Kingdom of Jordan, and Gaza was part of Egypt. Arafat and the PLO had no desire to liberate these parts of “Palestine from the river to the sea.” The only goal was to eradicate the Zionist entity known as Israel.

Which brings us to the moral dimension of the Palestinian aspirations. From its very beginnings, the Palestinian Arab movement has unceasingly relied on terrorism. One can start with the 1929 Hebron massacre of Jews and proceed to recent murders of Jewish families—pausing in revulsion at the carnage of two intifadas, the murderous attacks on school buses in Afula and elsewhere, the Munich Olympics massacre, and rocket and fire-kite attacks from Gaza. One can only conclude that this is a people unified by little more than genocidal anti-Semitism.

Its budgets and manpower, which could be devoted to developing its economy, institutions and infrastructure, are allocated to prioritize killing Jews. Schoolbooks are filled with bloody invocations to achieve life’s highest purpose through racially motivated martyrdom. Summer camps teach terror tactics and skills. Town squares, schools and parks are routinely named after suicide bombers with a significant Jewish body-count.

A major component of PA and Hamas budgets funds the “Pay for Slay” program which awards large monthly rewards, with the size of the stipends-for-life tied, again, to the Jewish body-count. Families of dead terrorists are similarly rewarded. So committed is the Palestinian leadership to the “Pay for Slay” program that they refuse hundred of millions of dollars in aid if it requires them to stop this atrocity of a policy.

There is simply no legitimacy to the aspirations of a people that supports policies of murder and ethnic cleansing—and yet repeatedly, polls indicate that over 80% of the Palestinian Arabs are enthusiastic backers.

The turn-of-phrase “Peace-loving Palestinian people” ought to cause cynical guffaws—or waves of nausea—on the part of all people of good-will.

Since World War I, numerous opportunities for statehood have been offered to them and their leaderships—including four serious offers from the State of Israel. The Palestinian Arabs have not even made counter-proposals, but, as in the Second Intifada, responded with horrible waves of terrorist violence. No other people has repeatedly refused the fulfillment of its alleged aspirations for nationhood—except the Palestinian Arabs.

Their entire brief history shows that their primary aspiration is the destruction of Israel and the genocide of its Jewish citizens. In the event they are successful in this horrific pursuit, getting a state of their own would just be a residual bonus. In fact, there is little to indicate that Palestinian Arabs wouldn’t gladly welcome annexation by neighboring Arab states: they certainly didn’t object to that state of affairs between 1948 and June, 1967, under Jordanian and Egyptian rule.

President Trump has been steadfast in his support for Israel, and has eliminated most aid to the Palestinian Arabs because of their inhuman actions.

But if his forthcoming peace plan includes a roadmap to Palestinian Arab sovereignty, Jews, Christians—and Muslims—must unite to educate and protest this death-inviting strategy. The fate of the Middle East and the continued existence of Israel depend on our efforts.

In talking with friends, family and colleagues, I urge you to clarify the dangers and unworthiness of Palestinian statehood schemes. Dispute any suggestion that there deserves to be a Palestinian state, or even a Palestine with more autonomy than it currently enjoys. This is an issue of morality as well as practicality.