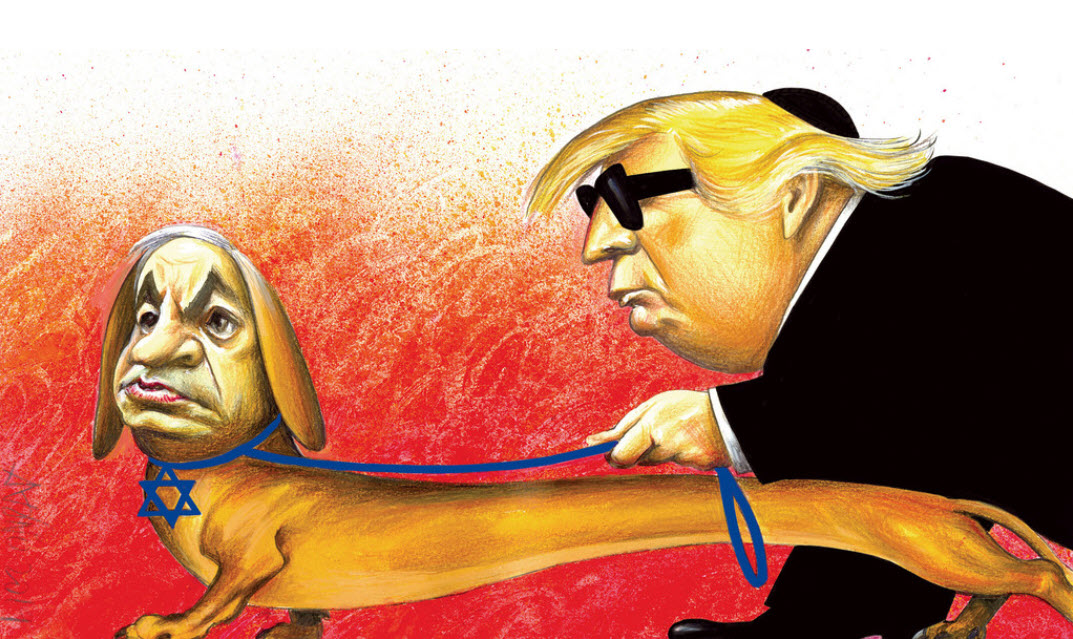 Screen-grab image of a cartoon that appeared in the New York Times International edition, depicting Israeli Prime Minister Netanyahu leading a blind American President Trump, who is wearing a yarmulkeh. Even the Times has admitted the cartoon is anti-Semitic

The New York Times has descended to new lows in its anti-Semitic treatment of Israel and Israel’s leadership. In the April 25, 2019 issue of its International edition, the Times printed a political cartoon that would have been right at home in Der Sturmer, the Nazi-era anti-Semitic rag that earned the attention and love of Adolf Hitler and his Reich.

The New York Times dutifully issued a tepid retraction within days, attributing the worldwide distribution of this bit of infamy to “an error of judgment” by a production editor at its International-edition offices. It then issued another set of comments admitting that the offending cartoon might have included “anti-Semitic tropes.”

The cartoon’s vileness is easily seen by anyone: A blind President Trump is being pulled along by his guide-dog, a nasty-looking Israeli Prime Minister Benjamin Netanyahu. The Netanyahu figure is a dachshund with a caricature of Netanyahu’s visage with exaggerated Jewish features. Just in case the viewer is confused about the message, the Portuguese cartoonist, Antonio Mereira Antunez, lends a helping hand by showing a Star of David dogtag hanging off Netanyahu’s neck, and a Jewish yarmulkeh crowning Trump’s head.

This disgraceful bit of handiwork serves as another piece of proof that anti-Zionism is anti-Semitic to its core.

The New York Times‘ rabid contempt for President Trump, and its equally virulent hatred for Binyamin Netanyahu is exceeded only by its century-old revulsion at both Jews and the very concept of a Jewish state in Israel. If it had merely wanted to suggest that the American leader was following the direction of his Israeli counterpart, there were many images available to present this canard. But this cartoon had those extra touches that let the reader know that there is much more to it than that.

It was not enough to emphasize the ethnic membership of the “dog” (Netanyahu) by having having him sport the Jewish emblem—the Magen David—around his neck, it was important to show the blind President of the United States wearing the skullcap of an Orthodox Jew. In other words, the hateful Trump is really an undercover Jew! And he is not just colluding with a foreign leader, he is slavishly following this Jewish leader around.

And to think Americans were concerned that Trump was a pawn of Russia. Clearly, this is much worse: The President is clearly a part of the International Jewish Conspiracy—another anti-Semitic trope—or so the Times cartoon would have it.

And yet, surprisingly, this vicious anti-Semitic portrayal is not the worst factor about its publication in the Times. Its inclusion in the paper reveals more clearly than ever the deep-seated anti-Semitism of the world’s “newspaper of record.”

The paper’s earliest publishers had been virulently anti-Zionist since the Zionist movement’s beginnings at the turn of last century. Run by the Jewish Ochs and Sulzberger families, the Times reflected a late nineteenth- and early twentieth-century anti-Zionist opinion that was then the official position of the American Reform movement of Judaism. But Reform Judaism awoke to the necessity of a Jewish state after World War II.

Yet the publishers of the New York Times decided to cling to their anti-Zionism despite this sea-change in Reform Judaism’s view of Jewish peoplehood. To the Times‘ owners and editors, the Holocaust was a mere footnote to World War II. Despite knowing what was happening in Nazi Germany and Nazi-controlled Europe, the Times turned a blind eye to the systematic extermination of European Jewry. It is well-documented that the leadership at the Times was quite aware of the Nazi death-squads and murder-camps, and ignored these verifiable stories or buried them as minor pieces deep inside the paper’s pages. Even the Times acknowledged its shameful disregard for the Holocaust in an apologetic editorial published last week about the cartoon scandal.

Throughout Israel’s existence, the Times has been obsessed with news and editorial coverage besmirching Israel and its leaders.

In one infamous story from 2000, the Times published a picture of an Israeli policeman towering over a prone, terrified, Palestinian-looking young man. The hulking policeman was swinging his club menacingly, and the caption informed the reader that this was yet another example of Israeli brutality.

When it turned out that the cop was wielding his club to fight off a rabid Arab mob that wanted to kill the man—who was, as it turns out, an Israeli Jew—the Times eventually published a small squib days later that retracted the caption’s interpretation of the incident.

According to the Times‘ narrative, Israelis are bloodthirsty and manipulative oppressors of the victimized Palestinian Arabs.

Throughout all of the wars and strife in Israel and its environs, the New York Times has faithfully sided—in both its news and editorial pages—with Israel’s adversaries. Even brutal, terrorist Palestinian Arab gangs—such as Hamas, Hezbollah and Fatah—can count on their absurdist press releases and bald-faced lies being faithfully reported and commented on in the Times.

It is therefore not too surprising that an International editor would select this cartoon for publication, having marinated in an anti-Semitic, anti-Zionist stew throughout his or her Times career. And, if President Trump can also be savaged, that is icing on the Jew-hating cake.

The New York Times has let the world know that it is incapable of providing decent and honest journalism on the topics of Jews, Israel, the Middle East . . . and much more.

FLAME does not support boycotts, although few could blame Times subscribers who choose to get their news elsewhere, especially after this incident. But it is important for all who care about matters affecting the Jewish people and Israel to seek alternative sources of news and opinion so that the Times‘ hateful reporting, editorial content—and now even its cartoons—can be refuted and dismissed as the hateful rubbish that they are.

To express your outrage at the New York Times coverage of Israel in general, and this cartoon in particular, contact their editors at letters@nytimes.com.

In talking with friends, family and colleagues, I urge you to make them aware of the grotesque biases of the New York Times. Discuss with them the Times‘ inability to self-police even the most outrageous accusations against Israel and its leadership. Emphasize that this latest example is not just an unfortunate incident of “inadequate oversight”: It is an honest expression of the Times‘ long history and its pervasive culture of anti-Zionist and anti-Semitic assaults. Urge them to rely on other sources for their information on Israel and events in the Middle East.

I hope you’ll also quickly visit FLAME’s lively new Facebook page and review the P.S. immediately below. It describes FLAME’s most recent hasbarah campaign-on whitewashing misrepresentations made by the media and, alarmingly, by some politicians, about the insidious Boycott, Divestment and Sanctions (BDS) movement.