FLAME
X
Put text, tables or any other HTML contents here, as you would put in any other HTML page. ..... and more.
Skip to content
Home » Despite vicious attacks on Israel by the media, the U.N. and Islamists, we continue to win!
New Survey Reveals American and Israeli Jews’ Profound Connections and Alarming Fissures _June 25, 2019Jacques Gautreaux2019-06-24T12:18:01-07:00 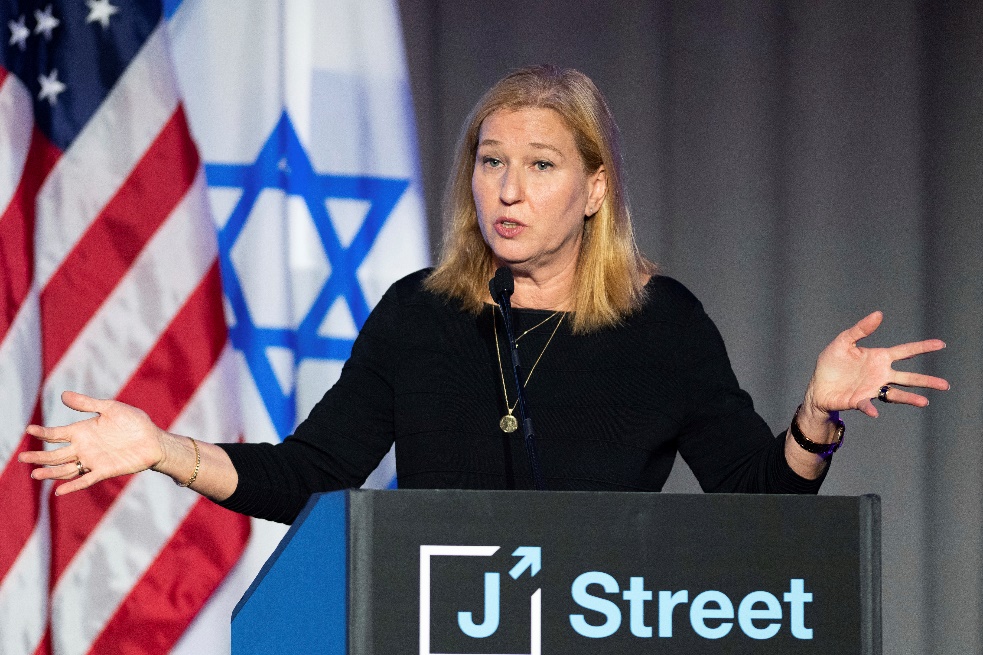 J Street, a lobbying group that purports to support Israel, actually opposes Israeli government and public opinion on such critical issues as settlements, a two-state solution, the status of Jerusalem and the Iran Deal—encouraging a disconnect between American and Israeli Jews. Above, former Israel Justice Minister and MP Tzipi Livni addresses a J Street crowd.

A recent survey contrasting the opinions of American, Israeli and French Jews about Jewish issues that affect the both global and regional communities reveals both heartening and deeply disturbing trends.

The good news is, Jews around the world still largely regard each other as friends or family and support each other’s survival. The bad news: Israelis and Americans differ radically on some critical, high-stakes existential issues that shouldn’t divide us. (We will not focus here on responses of our French contingent, by far the smallest.)

The survey, conducted in spring 2019 by the American Jewish Committee, asked representative samples of each nationality their opinions about some 21 topics, ranging from identification with Jewishness to American and Israeli domestic political issues.

It’s the political issues that create the conflict between us—and that also highlight a serious disconnect in perspective and values. Let’s take a look at four harmonies between American and Israeli Jews, then look at four disjunctures that portend political strife in the coming months and years.

Evidenced by the question, “How important is being Jewish in your life,” both Israeli and American Jews largely have a warm, embracing relationship to their Jewishness.

• Some 51% of Israelis say being Jewish is most important in their lives, 29% say it’s very important and 11% say somewhat important—that’s 91% who strongly value their Jewishness.

• For American Jews, the numbers are 45% very important and 35% somewhat important: While not as forceful a sentiment as Israelis at the high end (“most important”), still, the fact that 80% of American Jews have strong feelings toward their Jewishness shows a significant sharing of fundamental cultural and/or religious values.

Likewise, another key indication of shared values is found in answers to the question, “Using the metaphor of a family, do you consider American Jews [or, on the other side, Israeli Jews] your siblings, first cousins, extended family, or not part of my family .”

• American Jews are more lukewarm toward their Israeli counterparts, but still warm, scoring 13% for siblings, 15% for first cousins and 43% for extended family—a total of 71%—while 28% answered “not part of my family.”

To assess the centrality of Israel, the survey asked each group “Do you think that a thriving state of Israel is vital for the long-term future of the Jewish people?”

• American Jews responded with strong affirmation: 72% said yes, and “only” 25% said no.

• Israeli Jews, expectedly, responded even more emphatically: 91% said yes, and only 5% said no.

Finally, as a counterpoint to the previous question, the survey asked, “Do you think that a thriving Diaspora is vital for the long-term future of the Jewish people.”

• Curiously, American Jews felt less strongly about their own well-being, with only 65% registering affirmative to this question; 16% said no, and 17% had no opinion (couldn’t care less?).

• Most Israeli Jews expressed greater concern for the Diaspora’s survival than Americans themselves, with 74% of Israelis answering yes to the question, only 20% answering no, and 6% having no opinion.

So far, so good. These results sound like we American Jews and Israeli Jews could be friends. But when we look at American and Israeli opinions about political issues, we see much more divergence . . . and, frankly, reason for alarm.

Let’s start with the 800-pound gorilla in the room—Donald Trump. The survey asked each group, “Do you approve or disapprove of the way President Trump is handling U.S.-Israel relations.” The contrast in views is clear and unnerving.

• Israelis approve of Trump on Israel strongly (48%) or somewhat (31%)—for total approval of 79%. (Only 10% disapprove.) This is clearly a vote of hearty support by an overwhelming majority of our Israeli brethren—who obviously see themselves as benefactors of Trump’s decisions on the Iran deal, Jerusalem recognition, the Golan Heights, defunding of Palestinian terror and withdrawal from UNRWA.

• American Jews, in what seems a triumph of personal distaste for Trump over political logic, only 22% approve strongly and 14% approve somewhat—total approval on Israel of just 36%. Yet 45% disapprove strongly—a plurality of disapproval. A bewildered Israeli might ask, how can you disapprove of all these actions that helped us—what kind of support is that for us, what are you thinking?

On the question, “Do you favor or oppose a two-state solution through the establishment of a demilitarized Palestinian state on the West Bank,” we see a similar disconnect.

• Israeli respondents, however, for whom the question is dramatically more consequential, only support two states by 39%—17% strongly and 22% somewhat. On the other hand, a majority of Israelis—51%—oppose two states, either somewhat (18%) or strongly (33%). The idea of a two-state solution is obviously dying in Israel, but American Jews, relatively disengaged as they are, still cling to the old model of land for peace (which the Palestinians never have accepted).

Another burning issue in both American and Israeli communities is the question of settlements. The survey asked, “As part of a peace agreement with the Palestinians, should Israel be willing to dismantle all, some, or none of the Jewish settlements in the West Bank?”

Finally, and perhaps the most telling question, the AJC survey asked, “Do you think it appropriate for American Jews to attempt to influence Israeli policy on such issues as national security and peace negotiations with the Palestinians?”

• American Jews by a firm majority—57%—believe it is appropriate, while only 40% believe it is not. Despite all feelings of solidarity and identification with Jewishness and Israel, American Jews represent a group that is not part of the Israeli polity, doesn’t pay Israeli taxes, doesn’t vote, doesn’t speak Hebrew and lives thousands of miles and a world away from the Middle East. They want to influence an existential reality that doesn’t affect them, but that affects Israelis profoundly? Is arrogance the right word here?

• Understandably, most Israelis feel otherwise. An even stronger majority—63%—feels it is not appropriate for American Jews to influence Israeli policy, whereas only 31% believe it is.

Bottom line? It clearly serves both American and Israeli Jews to have a close, supportive relationship—Israel is the ultimate refuge for the Jewish people, wherever they live, and Israel benefits mightily from U.S. financial and international political support. Despite occasional protestations and assertions of disagreement, we are bound inextricably.

However, this profound existential connection has natural limits. Israeli Jews should not tell American Jews how they must practice Judaism—it’s none of their business. Likewise, the failure of American Jews to support the obviously pro-Israel actions of a U.S. President based on party or personal disdain is unconscionable. Similarly—though every Jew is entitled to an opinion, Baruch haShem—the presumption that American Jews have a right to influence Israel’s national or foreign policy flies in the face of justice and good sense. It’s none of their business.

I hope in your conversations with friends, family and colleagues you’ll emphasize the ineffable and unbreakable bond among Jews everywhere in the world, but also the rights of Israelis to elect their own government, make their own decisions about Arab relations and independently resolve questions regarding the territory of Israel.

In addition to advocating both for such Jewish brotherhood and a healthy independence among us, I hope you’ll also take a minute, while you have this material front and center, to visit FLAME’s lively new Facebook page and review the P.S. immediately below. It describes FLAME’s new hasbarah campaign—a refutation of the myth of the “Palestinian territories.”