FLAME
X
Put text, tables or any other HTML contents here, as you would put in any other HTML page. ..... and more.
Skip to content
Home » Despite vicious attacks on Israel by the media, the U.N. and Islamists, we continue to win!
New Palestinian Textbooks Teach More Jew-Hatred . . . and Undermine Peace EffortsJacques Gautreaux2019-07-22T13:56:08-07:00 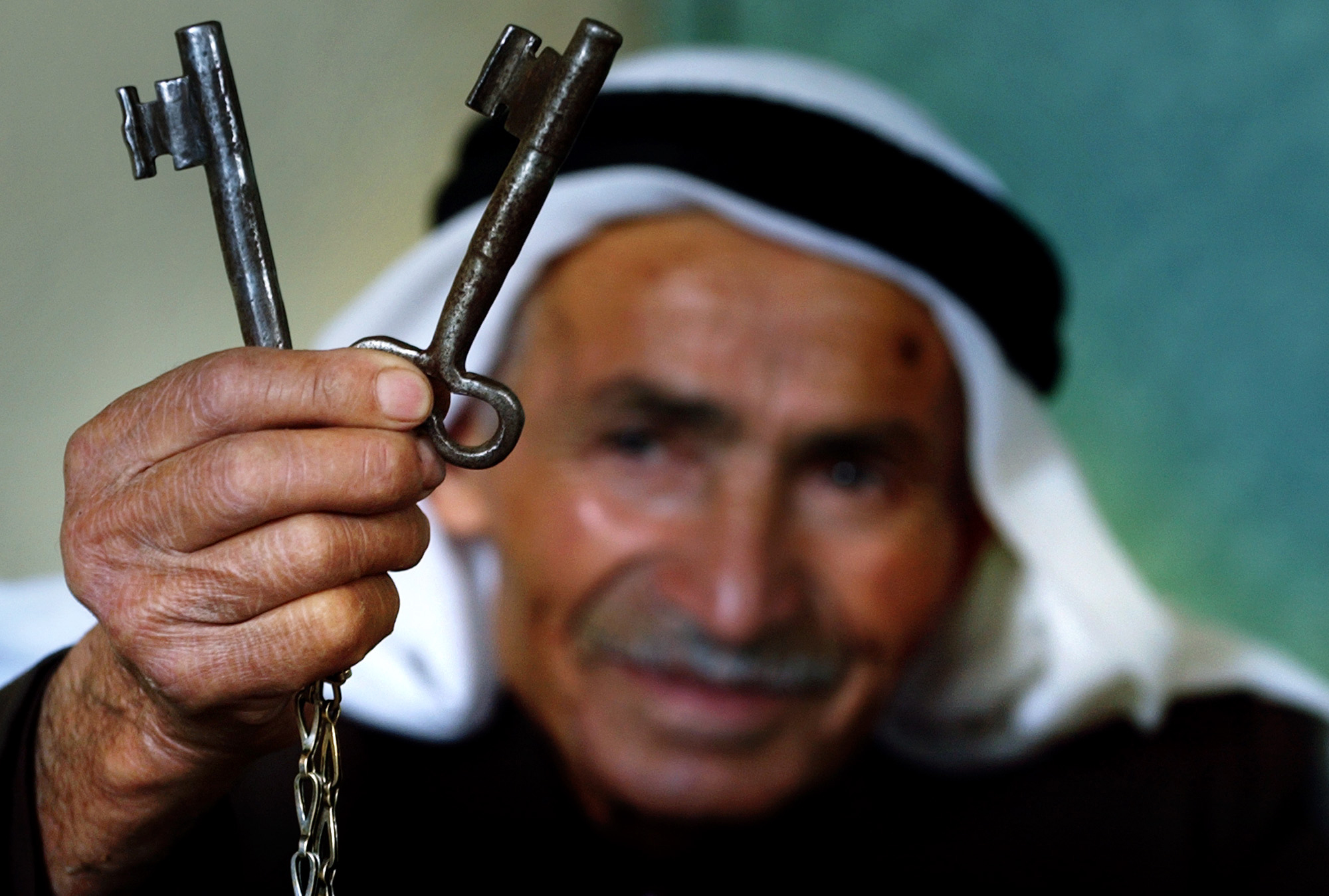 A Palestinian man holds the old keys to his home in the pre-Israel Palestinian Mandate. The new textbooks deployed to K-12 schools by the Palestinian Authority train young students to become martyrs to the cause of destroying the “Zionist oppressor,” so that Palestinians can regain their homes throughout Israel and drive the Jews into the Sea.

There was great hope and anticipation several years ago when the Palestinian Authority announced that it was completely replacing its K-12 school textbooks. But new editions merely confirm obsessive Palestinian hatred of Jews and rejection of peace with Israel.

The older Palestinian textbooks had been filled with ugly anti-Zionist—and anti-Semitic—propaganda. Shockingly, this pervasive spirit of distortion and hate wasn’t only employed in history textbooks, but also dominated language, math and even science lessons.

The original PA textbooks had been in use for about twenty years, having been published following the Oslo Accords. (Prior to that, Palestinian schools had continued to use the Jordanian textbooks that were published before the 1967 Six-Day War.)

Over the past three years, the PA has released the full set of new textbooks, and they are even worse than the old ones in teaching Jew-hatred, a fictionalized narrative of history, and a profound glorification of martyrdom, terrorism and hate. Though Western liberals continue to place the onus of peace-making on Israel, these materials make clear that the Palestinians continue to wage war.

Recently, the organization Institute for Monitoring Peace and Cultural Tolerance in School Education (IMPACT-se) has published its reports on the textbooks—replete with examples—that demonstrate the horrific indoctrination being inflicted on Palestinian youth by their educators.

Geography, of course, is taught without reference to Israel’s borders—or even the State of Israel’s existence. All of the maps and exercises are predicated on a state of Palestine with its borders extending from the Jordan River to the Mediterranean Sea, and from Lebanon to Egypt. Israel is completely obliterated throughout the textbooks, although the Palestinian textbooks are rife with references to “Zionist occupiers” and “Zionist-Jews.”

The Israeli city of Haifa is treated as “occupied territory”—every bit as “occupied” as the disputed areas of Judea and Samaria which fell under Israeli control in June of 1967. So while much of the world considers the issue of the eventual disposition of “the West Bank” to be the crux of the Arab-Israeli conflict, yet another generation of Palestinian kids in PA-administered schools are being indoctrinated to believe that the only satisfactory resolution of the situation is the total overthrow and expulsion of the “Zionist usurpers” from every square inch of “Palestine.”

In 2nd-grade Language, the children learn this:

But the perfidious nature of the Palestinian textbooks extends well beyond geography or even a history that is largely fictional. Throughout the math and science textbooks, problems and exercises are structured around the purported evils of the “Zionist occupation,” including even first- and second-grade math textbooks. Math exercises include comparing the number of “martyrs” in the first and second intifadas, and what percentage of those shot by Israeli soldiers in the Gaza uprisings were elevated to “martyrdom.”

Consider this excerpt from the 4th-grade Mathematics textbook:

Newton’s laws of gravity are illustrated in science textbooks using the functioning and lethality of slingshots used by would-be “martyrs.” Anatomy and the functions of different organs are described in terms of the happy adrenalin surge experienced by martyrs in their last moments. The effects of “Zionist oppressor” bullets on various body parts are thoroughly explored.

Here is a lesson from the new 7th-grade Science textbook:

During the first Palestinian uprising, Palestinian youths used slingshots to confront the soldiers of the Zionist Occupation and defend themselves from their treacherous bullets.

What is the relationship between the elongation of the slingshot’s rubber and the tensile strength affecting it? What are the forces that influence the stone after its release from the slingshot? What safety precautions should be taken into account when using the slingshot?

The essential thrust of the Literature and Language Palestinian textbooks is the glorification of martyrdom and jihad as unqualified virtues. Poetry extolling the virtues of suicide bombers and homicidal terrorists are frequent. This is from the 3rd-grade text, which is entitled “Our Beautiful Language”:

We sing and remember: The Land of the Generous

I vow I shall sacrifice my blood, to saturate the land of the generous and will eliminate the usurper from my country, and will annihilate the remnants of the foreigners . Oh the land of Al-Aqsa and the Haram, oh cradle of chivalry and generosity Patient, be patient as victory is ours, dawn is emerging from the oppression.

Dalal al-Mughrabi, the homicidal woman who orchestrated the 1978 Coastal Road massacre that murdered 38 Israelis—including a dozen Jewish children—is a highlighted heroine in a number of Palestinian textbooks, including this 5th-grade Language textbook:

Our Palestinian history is brimming with names of martyrs who have given their lives to the homeland, including the martyr Dalal al-Mughrabi. Her struggle portrays challenge and heroism, making her memory immortal in our hearts and minds.

The same textbook includes a list of Palestinian heroes to emulate and worship. All of them are terrorists. The list includes no scientists, no doctors, no engineers, no singers, no athletes, nor any artists .

In what one might grimly consider a feminist virtue of the new Palestinian textbooks, girls are called to participate fully in the jihad, and not to hesitate in making themselves into “holy martyrs.”

But these teaching materials do not merely present a perverse political philosophy, they also convey blanket falsehoods to erase Jewish history and support exclusive Palestinian claims to all of the Holy Land.

Thus, Jewish culture and history in “Palestine” are, not surprisingly, completely expunged. According to the Palestinian textbooks, any Jewish presence in the area has existed only in the last century, when synagogues were first built by the Zionist invaders, and the al-Buraq wall—built by Arabs in honor of the Prophet Muhammad’s horse—was renamed and co-opted by Zionists as “the Wailing Wall.”

Since—according to the Palestinian textbooks—there were never any Jewish Temples in Jerusalem, the Western Wall is clearly another Zionist-Jewish invention of recent vintage.

The Palestinian “phased plan” to eliminate the Zionist cancer from Palestine—which is still in the PLO charter—is diligently taught throughout the curriculum.

Yet the primary concern of the PA’s Minister of Education, Sabri Saidam is that Israel refuses to use these Palestinian textbooks in Arab-majority schools in Israel or the disputed territories, particularly in Jerusalem. Saidam insists that Israel’s use of versions of the Israeli curriculum for Arab-Israeli kids is “an ugly crime of counterfeit” perpetrated by the “Zionist oppressors.”

Great Britain and the European Union have contributed hundreds of millions to the development and propagation of the Palestinian textbooks and curriculum, but that may be drawing to a close: Both polities are doing their own reviews of the Palestinian textbooks. Each has laws outlawing aid in furtherance of terrorism, incitement, violence and hatred. Their reports are due later this year, and by all rights should spell the end of UK and EU furtherance of this despicable educational charade.

Those who doubt any imminent resolution of the Arab-Israeli conflict need look no further than these Palestinian textbooks to become even more pessimistic about a new Palestinian generation leading the way—at long last—to a peaceful future for Arabs and Jews alike. These unfortunate children are being brainwashed by their elders to seek no compromise, but to continue on the suicidal path of terror, hate and ignorance so well established by past generations of Palestinian Arabs and their leaders.

As you discuss Israel’s prospects for peace with their Palestinian Arab neighbors in the Middle East, I urge you to emphasize that peace requires two partners—and the Palestinians clearly show more inclination to make wat than peace. Make your associates aware of the travesty of the PA’s education system, and ensure that they understand that the Palestinian Arab leadership has opted to propagate a dreadful, blood-soaked future for its youth.

One other urgent issue for pro-Israel activists: This week the House of Representatives is scheduled to consider a bipartisan resolution (HR 246) to oppose BDS (Boycott, Divestment and Sanctions). Please call your Representative to push for a vote supporting this resolution, which puts Congress on record opposing the anti-Israel—and anti-Semitic—BDS campaign.

Please take a minute right now, while you have this phone number in front of you: Call (212) 224-3121 and ask for your Representative’s office. Here’s a sample script: “I’m calling to urge the Representative to push for a vote to support the bipartisan anti-BDS House resolution 246 when it comes to the floor this week. I oppose discrimination against the Jewish state.”

In addition to supporting this anti-BDS measure, I hope you’ll also take a minute, while you have this material front and center, to visit FLAME’s lively new Facebook page and review the P.S. immediately below. It describes FLAME’s new hasbarah campaign—a refutation of the myth of “Palestinian territories.”