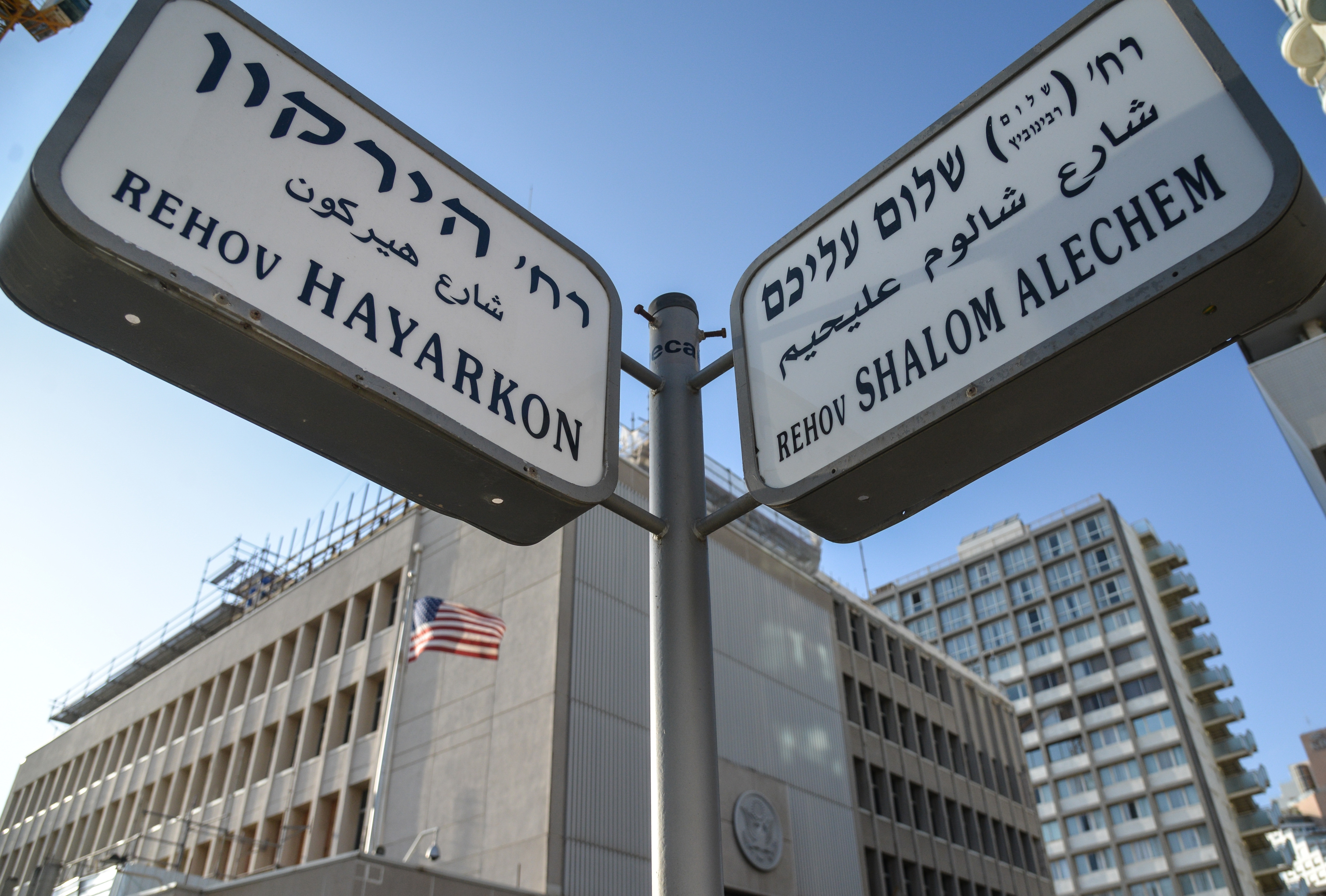 Street signs in Israel are commonly in Hebrew and Arabic, which will almost certainly continue under Israel’s new nation-state law, which gives Arabic special status. In fact, the new law is unlikely to change anything in Israel, as it only affirms current practices.

I received an unusual email from my local Jewish Federation a few days ago in which the CEO (a rabbi, no less) claimed that “recent news coming out of Israel has been disturbing.”

One reason for the CEO’s call of alarm was Israel’s new nation-state law, which he said includes “elements that could potentially impact the status of non-Jewish citizens of Israel, specifically Israeli Arabs, as well as Israel’s relationship with Diaspora Jewry.”

Surely you’ve seen similar outcries from other voices of the American Jewish community—like World Jewish Congress CEO Ronald Lauder condemning Israel in the New York Times—as well as mainstream media, like Time magazine, which called the nation-state law “an affront to democracy.” Wow. So what’s the controversy all about?

That’s a superb question, especially if you’ve actually read Israel’s 11-paragraph nation-state law itself—which in English fits cozily on a single sheet of paper. If you’re a Zionist, you’d be hard pressed to find a single clause objectionable . . . or even remarkable. More like boring.

Israeli firebrand columnist Caroline Glick termed the law a nothingburger. Bret Stephens in the NY Times called it an “underwhelming law whose effects would be mostly invisible if they hadn’t been so loudly debated.”

You don’t like “Hatikvah” as Israel’s national anthem? You object to the star-of-Davd flag design? The menorah as Israel’s symbol? Israel’s capital in Jerusalem? Shabbat and the Jewish holidays as Israel’s official days of rest? These are among the law’s handful of statutes

In fact, the hyberbolic reactions to the nation-state law in the West—like that of the Federation CEO—generally level no specific objections to any legal principles or outcomes of the law.

Rather, they resemble the whining we hear daily from the left—based on fundamental opposition to Israel as a Jewish state—or a search for excuses by squeamish American Jews for abandoning loyalty to Eretz Yisrael, because it’s too assertive (or too Jewish).

One “controversial” section of the law names Hebrew as Israel’s official language, while now classifying Arabic “only” as having “special status.” California’s population is 20% Hispanic, many of whom speak Spanish—yet Spanish has no special legal status in California. Nor does Russian have special status in Latvia, though 25% of its population speaks Russian. Call out the demonstrators and outraged New York Times reporters! Minority languages matter!

Likewise, the law in no way diminishes Arab rights or changes Arabs’ status in Israel.

As for Israel’s relation to Diaspora Jews, the law grants Israel zero power over Jews in the galut, nor gives Jews outside Israel any power over the State. In short, nothing will change—though Jews discomfited by fearless expressions of Zionism from Israel will no doubt continue to squirm.

In this week’s featured article (see below), Judith Bergman, Israeli writer and political analyst at Jerusalem’s Haym Saloman Center, accuses those criticizing the nation-state bill of unfair attacks—no less so than the constant carping of biased U.N. agencies against the Jewish state.

Indeed, while some have called Israel’s new law simply unnecessary, the hysterical cries from the media and some American Jews rather reinforce the wisdom of having passed it. It would seem that a bold declaration of Israel’s Jewishness is quite in order.

I hope you’ll forward Bergman’s concise, hard-hitting op-ed to friends, family and fellow congregants to help them understand why response to Israel’s nation-state law says more about the critics and complainers than it does about the law itself—which is innocuous.

Israel’s nation-state law has been widely condemned—with the European Union, the Organization of Islamic Cooperation and a number of American Jewish organizations leading the denunciations.

The EU expressed concern that the law would “complicate or prevent” the two-state solution, whereas the OIC called the law “racist, void and illegitimate.” The ADL said that elements in the law “could undermine Israel’s cherished democratic character,” whereas the Union for Reform Judaism declared that the law would do “enormous damage . . . to the values of the state of Israel as a democratic and Jewish nation.”

The denunciations of the law have centered on two elements: The first is section 4 of the law, which says, “The state’s language is Hebrew.” This is no different from the French constitution, which provides that French is the language of France, or the Spanish constitution stipulating that Castilian is the official language of Spain.

The concern that the law will lead to discrimination of the Arab minority in Israel flies in the face of the guarantee contained within the law that the status given to the Arabic language before the law came into effect will not be harmed and that Arabic has a special status within the state. The international hysteria surrounding the provision is not based on facts, but on suppositions fueled by political agendas, which lead us to the second point of criticism.

The second point centers on the unique right to the exercise of self-determination in the state of Israel that the law bestows on the Jewish people. It is, again, completely uncontroversial under international law that the majority nationality of a nation-state enjoys the unique right to exercise its self-determination and the national sovereignty that flows from it.

It simply means that Israel is the sovereign state of the Jewish people—hardly a legal innovation. In Spain, for example, the constitution specifies that national sovereignty belongs to the Spanish people, and this principle—whether codified or not—is generally followed by European nation-states, which do not, as a rule, grant self-determination to the various minorities, even large ones, who are living in their territories.

The international community, however, is outraged that the Jews would apply to themselves the same principle that is considered perfectly acceptable for the rest of the world.

Crucially, Arabs enjoy full state sovereignty in 21 Arab states, covering the territory of more than 13 million square kilometers (5 million square miles). In contrast, there is one Jewish state covering a territory of 22,000 square kilometers (8500 square miles). The international community, evidently, is finding it hard to stomach the existence of that minuscule Jewish state as an equal sovereign state.

The problem, therefore, is not that the nation-state law is discriminatory, or unique to Israel, but that large segments of the international community are determined to treat Israel in a unique and discriminatory manner, compared to how it treats all other nation-states.

The uproar over the nation-state law, in this sense, is no different from the constant singling out of Israel for condemnation at the United Nations, especially at the UN Human Rights Council, a discriminatory practice that contributed to the decision of the U.S. to withdraw from the organization.

The Palestinian Authority, with PLO Secretary General Saeb Erekat at the forefront, has seized the momentum of the international condemnations and is reportedly planning to take the law to the UN, claiming it violates the UN charter, and planning to petition the International Court of Justice for an opinion on it.

The international community has once again done what it does best, when it comes to Israel: Fueled the conflict.