FLAME
X
Put text, tables or any other HTML contents here, as you would put in any other HTML page. ..... and more.
Skip to content
Home » Despite vicious attacks on Israel by the media, the U.N. and Islamists, we continue to win!
Israeli Democracy Speaks Again: But What Did It Say?Jacques Gautreaux2019-09-23T14:26:30-07:00 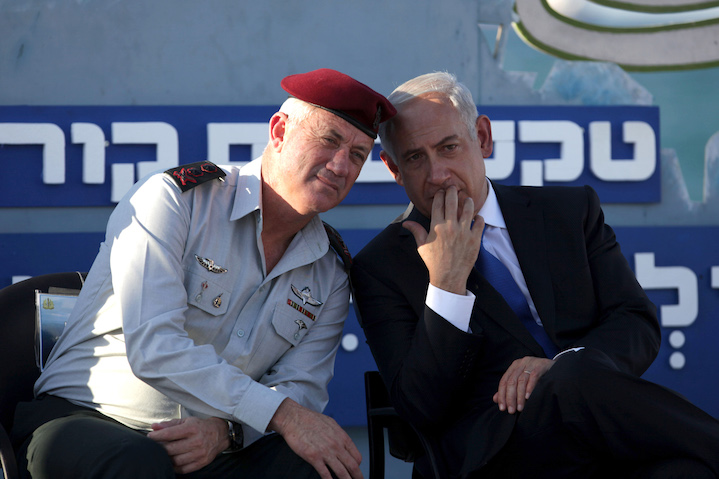 In more cordial Israeli pre-electoral times, then-IDF Chief of Staff Benny Gantz (Lt. Gen.-ret.) talks with his boss, Prime Minister Bibi Netanyahu. Now, the two Benjamins are fighting one another to become Israel’s next Prime Minister. Gantz out-polled Netanyahu in last week’s Knesset election, with 33 seats to Bibi’s 31. Who will be the next Israeli Prime Minister? Ironically, with only eight seats in the new Knesset, Russian-Israeli leader Avigdor Lieberman may well decide.

Israeli Democracy Speaks Again: But What Did It Say?

Last week, Israeli citizens went to the polls once more—the second Knesset election in fewer than six months. Remarkably, the reported voter turnout level of 69.4% was higher than in their last vote in April, and exceeded American turnout in our last presidential election by about ten points.

In fact, the vibrancy of Israel’s democracy may even exceed that of the United States’—with all the positives and shortcomings that may imply. Indeed, the shortcomings of the U.S. electoral college system are dwarfed by the agonizing machinations that Israel has been going through—and will continue to experience in the coming months.

When Congresswoman Ilhan Omar said a few months ago that, for Jews, “It’s all about the Benjamins,” she was widely excoriated for her anti-Semitic remark that conjures images of Jews caring only about money—a “Benjamin” being street-slang for a one-hundred-dollar bill.

But the congresswoman’s remark is a surprisingly good description of the current status of election politics in Israel, the Jewish state. Voters there produced a near-tie between two real Benjamins—”Bibi” Netanyahu and “Benny” Gantz. Israel’s future may depend on which Benjamin emerges on top.

With the polls barely closed, the various parties began their elaborate coalition dances, which can consume weeks of high-pressure and high-stakes political and ideological horse-trading among the numerous parties and their leaderships.

Gantz’ Blue and White party was declared to have won 33 seats, while Netanyahu’s Likud received 31 seats in the 120-member Knesset.

Similar to Great Britain’s political structure—familiar to the Zionists from the three-decade-long British Mandate period—the nation’s Chief Executive is the Prime Minister. The Prime Minister is elected by the Knesset, and is the party leader that can pull together a 61-vote majority in the 120-member Knesset.

Unlike Great Britain, however, Israelis have never voted a single majority party into power—even in the glory days of their first Prime Minister, David Ben-Gurion. This means the leader of the “victorious” party must strike coalition agreements with minority parties in order to reach the magic number of a 61-seat majority—and this is where things often get interesting.

Having spent weeks or months vilifying one another in the invariably overheated campaigns, some assortment of parties must come up with a working alliance to come to a 61-vote majority. After last April’s Knesset election, the incumbent Bibi Netanyahu and his Likud party were unable to reach a governing coalition, resulting in a sort of do-over election last week.

There are certain over-riding taboos that intrude into the possible coalition deal-making—and those complicate the situation in dramatic ways. Some secularist parties refuse to sit in a coalition with ultra-orthodox (Haredi) parties . . . and the feeling is mutual. Since the Haredi parties usually wind up with over 20 seats, that can be a killer in forming a majority coalition.

But it gets worse: Arab Israelis usually vote for Arab parties, all of which are fundamentally anti-Zionist. In the recent election, the Arab Joint List won about thirteen seats. No Arab party has ever been asked to participate in a ruling coalition, for fairly obvious reasons. This means that the acceptable Knesset pool for a 61-vote majority is really about 107 “Jewish-party” seats.

When you toss in the often diametrically opposed parties’ views on how to address the elephant in the Knesset chamber—the “peace” issue—several parties in the past would refuse to join in coalition with others. All of this is then augmented by the vivid, profoundly personal dislikes between leaders of the differing parties.

In the recent election, the continuation of the decade-long rule of Netanyahu-led, Likud-dominated coalitions was a central issue. With a tenure exceeding even that of the beloved Ben-Gurion as Israel’s leader, Bibi’s continued leadership was a major point of contention, regardless of whether voters generally agreed with his politics and policies. Looming over Netanyahu is also a prospective indictment in three different corruption scandals.

Right now, it seems that the largest obvious Knesset bloc that Benny Gantz could muster is about 57 seats—but that number includes the 13-member Arab party group. Most observers think it highly unlikely that Gantz could or would create a government whose stability would hinge on anti-Zionist legislators. If they are excluded, Gantz only has 44 of the 61 votes needed.

Meanwhile, Netanyahu has a clear path to only a 55-vote plurality—insufficient to continue his control of the government.

The only way this election wasn’t “all about the Benjamins” is Avigdor Lieberman and his Yisrael Beyteynu party, which consists primarily of hundreds of thousands of Russian Jews who made aliyah after the collapse of the Soviet Union in the 1990s.

Lieberman and his quite secular party hold just eight seats—but that’s enough to position him as the king-maker. He refuses to go along with Netanyahu’s religious-party-based coalition, and so he is demanding a unity government of both Benjamins—and no Arab parties—to neutralize the power of the religious parties. He hopes he can then force through anti-religious legislation regarding things like Haredi draft deferments, the power of the Chief Rabbinate, and public restrictions on Shabbat activities.

It’s worth noting, by the way, that both Benjamins and Avigdor substantially agree on that “peace” elephant in this election. Each is in favor of a muscular policy toward Israel’s foes, holding on to the Jordan River valley, and acting militarily to control security threats and violence from Iran and its terror proxies—Hamas to the south and Hizbullah to the north.

Whoever is tasked to form a ruling coalition will have six weeks to do so. It should be a tumultuous and fascinating month-and-a-half in Israeli politics!

In discussions with friends, family and colleagues, emphasize that, if chaos is a key feature of democracy, Israel’s may be the most democratic government on earth. The horse-trading and intricate maneuvering toward forming a new government are likely to yield stunning compromises in Jerusalem that, sadly, are in short supply in Washington, D.C. these days. We should soon see if it’s really “all about the Benjamins” or, ultimately, “all about Avigdor Lieberman.”

I hope you’ll also take a minute, while you have this material front and center, tto visit FLAME’s lively new Facebook page and review the P.S. immediately below. It describes FLAME’s new hasbarah campaign—a refutation of the myth of “Palestinian territories.”