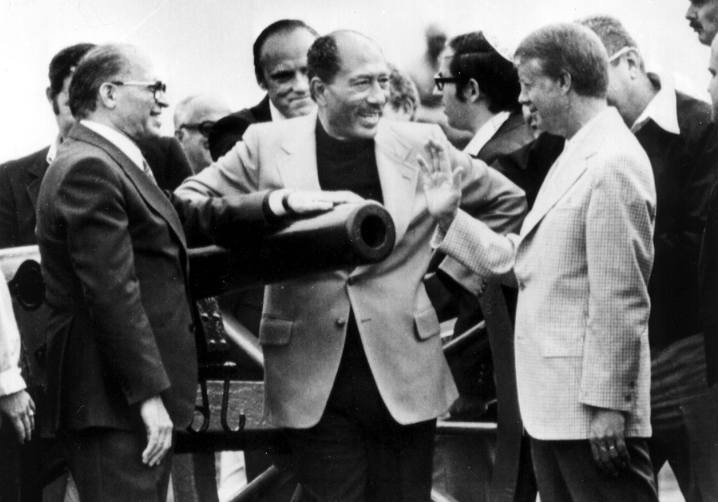 Egyptian President Anwar Sadat, Prime Minister Menahem Begin and President Jimmy Carter in 1979, agreeing to forsake the gun, in favor of a just and durable peace.

On March 26, Israel held a full-throated celebration of forty years of peace with Egypt. But ongoing Egyptian actions could endanger the Israel-Egypt treaty, plunging the entire region into conflict. After decades of peace, it is understandable that many take the peace with Egypt for granted. That dangerous complacency—especially in Washington—means that things could swiftly swing out of control with Egypt and throughout the Middle East.

As the 2011 Arab Spring made clear, things in Egypt can change rapidly and for the worse. War with Israel could result if Egypt’s leadership changes its policies, personnel or priorities. That would be disastrous because Egyptian society, the media and popular sentiment is grotesquely anti-Israel and anti-Semitic. So is much of the Egyptian military establishment.

Even after those forty long years, Israeli-Egyptian relations remain in the wilderness. Despite Israel’s efforts to normalize its relations with its southern neighbor, Egypt still holds its peace partner at arm’s length.

No Egyptians participated in the fortieth-anniversary celebration, nor did Egypt mark the date in any way.

America is not without considerable influence in Egypt. Since 1948, Washington has sent over $80 billion in foreign aid to Egypt—almost all of it for the military. This year we will send another $1.4 billion to Cairo, making Egypt the second-largest aid recipient (after Israel). America can press Egypt to invigorate its cultural, educational and tourist exchanges with its Israeli counterparts—things that Egypt attempts to thwart and suppress.

True and durable peace between long-time enemies is not only defined by the absence of warfare. It also involves efforts to build lasting bridges between the former foes to ensure that occasional conflicts do not escalate to the point of endangering continued peace.

The United States was the catalyst for peace between Israel and Egypt in 1979, and must renew its commitment to that peace and assure that Egypt’s coolness to Israel doesn’t undercut a true and durable peace between the two countries and peoples.

While security cooperation between the two sides has been good in the Sinai against al Qaeda units and other Islamist terrorist groups and at Gaza in the joint blockade of Hamas’ terror dominion, that situation is hardly reliable: when the Muslim Brotherhood ruled Egypt for two years during President Morsi’s tenure, relations and security cooperation with the hated Israel were, at best, tenuous.

Current Egyptian President al Sisi, a secular leader, primarily desires that the Islamist lawlessness in Sinai doesn’t spread to the Egyptian heartland. He also views Hamas for what it ultimately is—a Muslim Brotherhood offshoot that wants access to Egypt to spread its violence.

As seemingly reliable as President al Sisi is, both Hosni Mubarak and Anwar Sadat could have assured you that stability in Egypt hangs by a thread in the face of Islamist threats.

If Egypt again slides into the Islamist camp, Hamas will have an open border with Egypt. Cross-border attacks into Israel will become a regular and tragic consequence, and the fuse will be lit for an Egyptian—and popular—rejection of the peace treaty with Israel.

A vast Egyptian majority remains passionately anti-Israel—and anti-Semitic—and it rallies behind terror attacks from Sinai and Gaza into Israel. The “Egyptian Street” has done so in the past—as in 2004, when Sinai terrorists bombed the Taba Hilton and killed 34, including many Israelis.

Lacking popular support for any peace with the hated Israelis, a new hardline Cairo government might decide to re-militarize its Israeli border, with potentially terrible consequences for all parties. Israel would be forced to respond, and an ugly blood-letting could ensue.

When Egyptian President Anwar Sadat visited Israel on November 20, 1977 and addressed Israel’s Knesset, it was a diplomatic thunderbolt. A genial President Sadat held out more than an olive-branch of peace—he offered a peace including friendship and social engagement: a true and durable peace between neighbors.

The two nations, which had fought five bloody wars in the three decades after Israel’s creation in 1948—including President Sadat’s own 1973 Yom Kippur invasion of Israel—agreed to work diligently toward that true and durable peace.

At this point, American President Jimmy Carter stepped in to offer the United States as the facilitator and guarantor of a true and durable peace. The 1979 Camp David Accords validated the American role as defender of the peace, and solidified American financial support for the two countries taking the risks for peace.

Mubarak was overthrown in the Arab Spring in 2011, ushering in the brief ascendance of the virulently anti-Semitic Muslim Brotherhood. Recently, Egypt-Israel relations are comparatively more amicable under President al-Sisi, but are still far from the visions of Sadat and Begin.

Thankfully for all parties—and the world community—the peace between Egypt and Israel has held through all the turmoil in that part of the world. But its endurance is constantly tested by Egypt’s policy of keeping Israel at a distance. Cairo’s press and other media vilify Israel at all times. During Ramadan last year, its state-directed TV network featured a series about a sinister Mossad agent acting undercover—as an al-Qaeda operative, no less—to subvert Egypt’s government. Elements of the anti-Semitic Protocols of the Elders of Zion pervade discussions and dramas about Israel throughout Egypt’s tightly controlled media.

After forty years of financing a cold peace between Egypt and Israel, the United States must bring Israeli and Egyptian leaders together to forge stronger and more durable popular support for the deal on the ground.

America can facilitate—through its vast and generous aid and trade agreements with Egypt—greater academic, cultural, tourist, and economic ties between the nations. Israel has much to offer its Egyptian partners—water technologies, applied medical breakthroughs, and other technical triumphs.

Egypt is now largely, by choice, insulated from all these benefits that its partnership with Israel can offer. America, uniquely, can benefit the cause of a just and durable peace between Israelis and Egyptians by insisting that Egypt and Israel become true partners in the future.

In talking with friends, family and colleagues, I urge you to tell them about the critical importance of a true and durable peace between Israel and Egypt. The good will that existed in Sadat and Begin’s day has corroded badly. Make known to your elected representatives that America must renew its push on Egypt to cultivate its ties with Israel and Israelis. America played a crucial role in making peace possible. It must re-double its efforts to assure that the amazing peace that it facilitated is not just “no-war peace,” but durable peace as well.