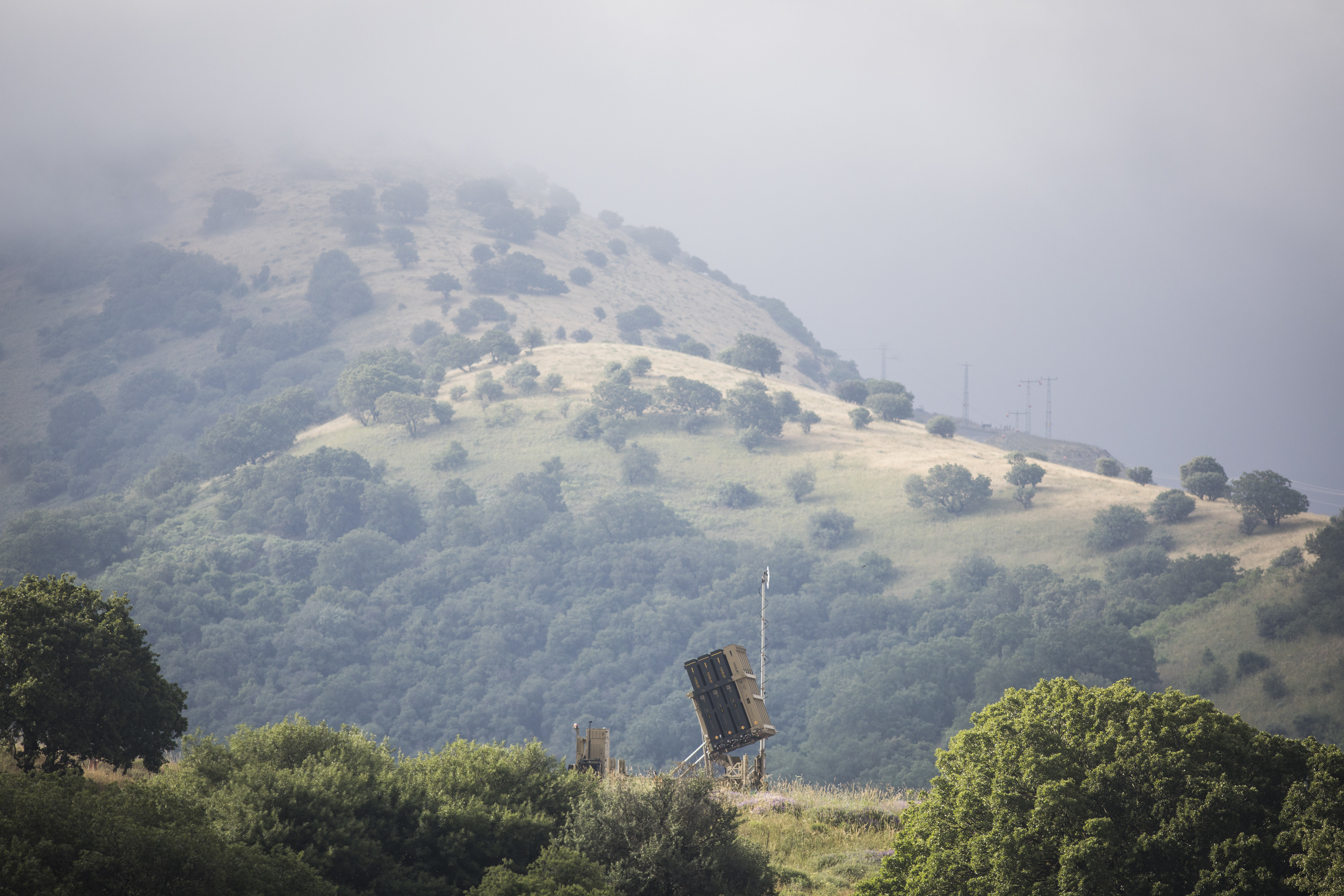 The Golan Heights, which served as a vantage point for Syrian assaults before Israel captured it in 1967, now has Iron Dome installations (foreground) to protect Israel from Iranian missile attacks.

Israel owns the Golan Heights: Time for the U.S.—and the world—to recognize it

For the sake of the security of Israel—and that of the entire Middle East—America must follow through on its speculated readiness to recognize the 1981 Israeli annexation of the Golan Heights.

Having endured 22 years of Syrian assaults from the Golan Heights, Israel repelled Syria from its Golan base of attacks during the Arab invasion of Israel in the 1967 Six-Day War.

With the exception of a Syrian attempt at an armored re-invasion—successfully repelled by Israel during the 1973 Yom Kippur War—peace has reigned on the Golan Heights since then. Despite offers to negotiate a return of the Heights to Syria during many Israeli governments of all parties, Syria refused to make a deal—and thus give up its permanent state of war with the Jewish State.

Israel certainly demonstrated its sincerity in permanently settling its frontier issues by resolving its dispute over the Sinai peninsula with Egypt’s Anwar Sadat in 1979. In an unprecedented move, Israel relinquished all of the southern territory it acquired from Egypt during the Six-Day War. The Sinai was vastly larger than Israel itself, and, in return, Israel secured just a luke-warm—but a permanent—peace with Egypt.

But the brutal Assad dynasty of Syria has rejected all approaches by Israel for over 50 years. Now that President Bashar Assad of Syria has shown his true colors through his bloody conduct in the Syrian Civil War, the idea of him as a peacemaker with Israel is absurd. And Iran’s increasing military involvement in Syria makes such a scenario horrific in its implications for Israel and peace.

No reasonable person can expect that a post-Civil War Syrian regime—backed by Iran—will treat the Golan Heights as anything other than a launchpad for renewed attacks against Israeli targets around the Sea of Galilee target below—just as they did before 1967.

“The last 70 years serve as a laboratory of real life, and the results [of the experiment conducted therein] are incontrovertible: when in the hands of Syria, the Golan Heights promoted conflict. When in the hands of Israel, they have promoted stability.”

“American diplomacy is most effective when based on reality.”

Reality, indeed, was recognized by President Trump when he recognized Jerusalem as Israel’s capital recently. Regardless of one’s opinions about the Middle East and the current administration in Washington, the reality is this: Jerusalem is, was, and will always be Israel’s capital.

The president’s decision wasn’t really a decision about Jerusalem. Rather it was an acknowledgment that, in negotiations between Israel and the Palestinian Authority, the status of Jerusalem as Israel’s capital was nothing more than a deal-killer and provided another excuse for Palestinian intransigence.

Like the Jerusalem decision, American recognition of Israel’s Golan Heights sovereignty will help to remove from post-Syrian Civil War diplomacy an issue that will simply kill any chance for the resolution of difficult conflicts between Israel and its neighbors.

In this week’s featured FLAME Hotline article (see below), Richard Kemp, past Commander of British Forces in Afghanistan, and Rafael Bardaji, former Spanish National Security Advisor, detail the potential threats to Israel and to world peace of the return of the Golan Heights to Syria. Emphasizing Iran’s growing military presence in Syria, they offer a chilling picture of Iranian guns on the Golan Heights looking down on their arch-enemy Israel . And they offer suggestions as to how American leadership can eliminate that threat.

I hope you’ll forward this article to friends, family and fellow congregants to help them understand why the Golan Heights must never leave Israeli control and how American recognition of Israeli sovereignty there will forestall such a disaster in the future.

I hope you’ll also quickly visit FLAME’s lively new Facebook page and review the P.S. immediately below, which describes FLAME’s recent hasbarah campaigns exposing the root cause of Palestinian peace-making failure—their dueling dictatorships in Gaza and the West Bank. I hope you agree with and will support this message.

In the name of peace, it is time to accept Israel’s possession of the Golan Heights

By Rafael Bardají and Richard Kemp, The Telegraph, October 3, 2018

The Golan Heights were a launch-pad for aggression against Israel from the rebirth of the state in 1948 until captured by Israel in a defensive war in 1967. Even today, territory adjacent to the Golan is used to threaten Israel. It is time for the international community to recognise Israel’s possession of the Golan Heights as legitimate and necessary. Such a bold move would do much more than just support Israel’s security—it would also advance peace and regional stability.

The Golan Heights, bordering Israel, Syria, Lebanon and Jordan, dominate the Jordan Rift Valley which contains the Sea of Galilee and the Jordan River. The Heights were allocated by the British and French governments to the French Mandate of Syria in the 1920s and were transferred as part of the newly independent state of Syria in 1946. When the administrative line between the British and French Mandates was drawn in 1923 no consideration was given to defence against aggression from either territory.

The picture has of course changed immeasurably since then. Vulnerability of Israel to occupation of the Heights by hostile forces is proven by recent history and re-affirmed by events from the start of the civil war in Syria until today. This vulnerability remains even with the advent of modern warfighting technology.

It is a commonly held view that Israel’s possession of the Golan Heights is illegal under international law. But this position is not tenable. It is illegal to hold onto territory acquired through wars of aggression, but Israel gained the Golan Heights during its defence against aggression launched from the Golan. Under the UN Charter defensive war is not illegal and throughout history countries have retained territory gained in their own defence.

Recognition by the international community would not encourage wars of aggression but, on the contrary, would deter them. Returning the Golan Heights to Syria would not only endanger Israel and against their will consign the 25,000 Druze living there to the depredations of President Assad; but it would also send the message that an aggressor has nothing to lose as there is no territorial price to pay for its violent actions.

Western support for Israel’s sovereignty over the Golan Heights would equally extract a price from Assad—albeit a comparatively small one—for the war he has waged against his own people in which millions have suffered and perhaps half a million died. In this, the West has plenty of words but few tools at its disposal. Rejecting Assad’s claim on the Golan Heights is one of them, especially as he now seems set to retain virtually all of the status quo ante even after the monstrous war crimes he has committed.

But such a move by the West would be much more than just a rap on the knuckles, it would also be an expression of the new reality. In the past Israel offered Syria the Golan Heights in exchange for peace, with all approaches rejected. Many Western experts and governments naively viewed Assad as a potential partner for peace with Israel. The events of the last seven years have proven beyond all doubt that he is nothing other than a murderous despot who must not be given any opportunity for further aggression.

This is really the crux of the issue: Western action now could make a concrete contribution to preventing conflict in the future.

Syria is now and will remain for the foreseeable future under the domination of Iran. Through both actions and words, we know the Iranian ayatollahs are intent on aggression against the Jewish State. They are establishing a land corridor from Iranian territory through Iraq and Syria to Israel’s border and plan to link their forces in that area with Hezbollah’s strong offensive forces, including 100,000 rockets, in southern Lebanon. They have positioned their own forces and their proxies where they can threaten Israel and are intent on building these up and maintaining them in position for the long-term.

The Syrian government, as the civil war dies down and when it reconstitutes its forces with Russian assistance, will itself threaten Israel at Iran’s behest; and Hezbollah and other Iranian proxy militias will also continue to do so. If these—or any other—malignant entities gain possession of the Golan Heights the threats of cross-border indirect fire could well escalate, leading to the deaths of Israeli civilians and forcing Israel into an overwhelming response that would cause significant bloodshed. This would potentially draw southern Lebanon into a conflict that could easily explode into a regional war.

Israel’s possession of the Heights on the other hand is never likely to translate into offensive action against anyone. Israel has only ever fought on the defensive and its government sees neither Syria nor Iran as targets for aggression.

Iran, Syria and other entities proclaim Israel’s occupation of the Golan as an excuse for conflict. Iran and its clients in the region including Hezbollah, Hamas and Palestinian Islamic Jihad, count on a weak Western response to their aggression, with appeasement and judgments of moral equivalence serving repeatedly to encourage their violence. The other side of the coin is that unequivocal rejection by the West of this excuse would reduce the prospects of conflict.

We understand President Trump is now considering some form of recognition of Israel’s legitimate and necessary possession of the Golan. We strongly support this proposal and encourage all other Western nations that are genuinely interested in the cause of peace to do the same.