FLAME
X
Put text, tables or any other HTML contents here, as you would put in any other HTML page. ..... and more.
Skip to content
Home » Despite vicious attacks on Israel by the media, the U.N. and Islamists, we continue to win!
Israel Must Be Wary of Two-Faced JordanJacques Gautreaux2019-12-16T12:13:29-07:00 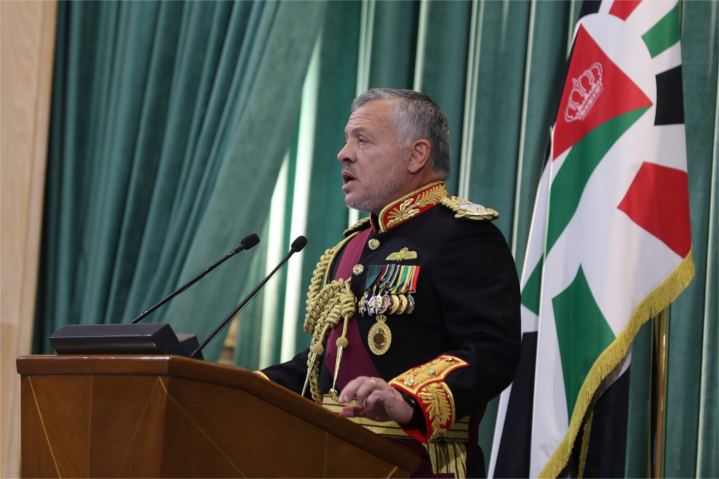 Jordan’s King Abdullah announces that his Kingdom is asserting its full sovereignty over contested farms in the Jordan Valley. The move cancels a quarter-century-old leasing agreement with Israel.

Israel Must Be Wary of Two-Faced Jordan

Last month, the Kingdom of Jordan cancelled a component of its quarter-century old peace treaty with Israel. It evicted Israeli kibbutzniks from two tracts of contested land in the Jordan River Valley. The minor stretches of land—Naharaim in the north and Tzofar in the south—include what is now ironically called “The Isle of Peace.”

This action by Jordan emphasizes the need for Israel to assert its necessary security rights in the Jordan Valley. For over a half-century, Israel’s eastern border with Jordan has been no more than an armistice line—a residue of the 1967 Six-Day War. Just as the Golan Heights are clearly vital to the security of northern Israel in any foreseeable future, so too is the Jordan Valley for its eastern frontier.

Israel annexed the Golan in 1981—a move recently recognized by Washington, D.C. It is time—especially in the context of an utter absence of a “peace process” and Jordan’s less than trustworthy conduct—for Israel to annex the strategically vital parts of the Jordan Valley, or to formalize its perpetual control of this vital territory without the ambiguity of some future “final-status” resolution.

Jordan’s action doesn’t mean the end of peace between Israel and Jordan, and the minor farming tractates in question have little more than symbolic value. But that value has until now been to underscore the ability of the two nations to live amicably in a spirit of mutual trust.

Jordan has been playing a paradoxical role in the Middle East for decades, but it has become increasingly hostile to Israel in recent years. Underlying it all is the supreme irony that the Jordanian monarchy is almost totally dependent on Israel for its continuance in power. Israel provides enormous water resources to Jordan, without which it would shrivel and die. Further, Israel is Jordan’s primary supplier of energy, and Israel’s new Leviathan gas-fields—coming online next year—will power the bulk of Jordan’s industry and housing.

As a result of the United States-brokered 1994 Israel-Jordan peace treaty, Jordan receives enormous annual foreign aid sums from Washington. So the Kingdom’s internal economic stability depends on Israel, and the clandestine security assistance given by Israel to Jordan is crucial in maintaining King Abdullah’s control in the face of an unhappy populace and no shortage of Islamist and other challenges to his continued rule.

King Abdullah’s monarchy was inherited from a line of Saudi emirs—the Hashemites—who were placed on the throne in Amman by the British after World War I. Simply put, Abdullah and his family are foreigners to Jordan, inhabiting a royal house imposed by Western powers. The majority of the Jordanian population is Palestinian Arabs—those who came during the British Mandate, many who fled there during Israel’s War of Independence, and still more who retreated there during and after the 1967 War. The bedrock of traditional Jordanian society has always been Bedouin, but they are now a minority in their own country.

The Bedouin resent the Palestinian “newcomers,” and the Palestinian Jordanians are as concerned with their brethren across the Jordan River as their fellow Jordanian countrymen. Above all, there is no natural love to be found either among Bedouins or Palestinian Arabs for the imported Hashemite house of King Abdullah.

He—like his father and great-grandfather—must curry favor with his divided populace. Without Israeli financial and economic support, his regime would not have been among the few to avoid the chaos of this decade’s Arab Spring throughout the region.

But his Israeli peace-partners and benefactors are hated in Jordan more than in almost any other Arab nation. Abdullah is thus forced to play the anti-Israel card at any and all opportunities to assert some identification with the people he rules. The legislature in Amman—in theory, subservient to the Crown—is an echo-chamber of anti-Israel invective, saber-rattling and anti-Semitism.

The holy sites in the Old City of Jerusalem were allowed to continue under Jordanian management by Moshe Dayan after the Six-Day War. They provide a constant source of Jordanian grievances and Israel-Jordan diplomatic rows every time some security issue requires Israeli interference on the Temple Mount.

In short, King Abdullah is required to be anti-Israel in public, and pro-Israel in private if he is to maintain his fragile grasp on power in Jordan.

For Israel and the Middle East, this is not the sort of dynamic that should inspire long-term trust.

Unfortunately, the kind of double-cross that King Abdullah recently perpetrated in the Jordan Valley’s contested territories is becoming increasingly the norm in Israel-Jordan relations, and casts a long shadow over the cause of peace and the extent to which Israel can rely on its eastern neighbor as a joint defender of a secure border in the Jordan Valley.

Abdullah continued in his speech to observe that “Israeli-Jordanian relations are at an all-time low.”

Before the 1967 War, Jordan had illegally conquered and annexed the co-called West Bank along with most of the rest of what was to be an independent Arab state in 1948.

After his crippling defeat in the Six-Day War, Hussein of Jordan renounced Jordanian claims to the territory—and officially designated the PLO under Arafat to take up cudgels against Israel in reclaiming the territory for the Arab world. The PLO took this opportunity to add the West Bank to the territories it was targeting to liberate—along with the rest of Israel.

Leaving aside the sheer chutzpah involved in a defeated nation deciding who should become sovereign in territory it stole twenty years earlier, Jordan effectively took itself out of the power equation in deciding the disposition of the lands won by Israel in 1967.

The threat now to Israel is that Jordan is a very unstable partner in maintaining the security of Israel in the Jordan Valley and south. In fact, after the war in 1967, Israeli statesman Yigal Allon proposed a plan for the territories that stated the necessity for Israel to annex the Jordan Valley if it ever wanted to have a secure eastern border at the Jordan River. This call has been repeated by candidates in Israel’s recent elections—by Prime Minister Netanyahu among others.

While ISIS no longer threatens a takeover in Jordan, other militant Islamist groups have their eyes set on Amman, and a combination of guerrilla and militia actions could undo the unstable rule of Abdullah in Jordan.

Or Abdullah, to maintain his throne, may opt to enter alliances with the more radical elements within Jordan. His cancellation of the Israeli leases in the Jordan Valley do not portend well for his willingness to risk popularity at home in exchange for Israel’s vital security interests.

In discussions with friends, family and colleagues, explain that Israel’s border with Jordan is a very vulnerable one and a vital issue. In any “final” deal with the Palestinian Authority, the uncertainties about the survival of the Jordanian regime and doubts about King Abdullah’s willingness to take risks to ensure a demilitarized Jordan Valley must be key components if peace and security are to come. One thing is certain: Israel will insist on military control of this territory—via annexation or through a permanent, irrevocable agreement guaranteed by the Israel Defense Forces.