FLAME
X
Put text, tables or any other HTML contents here, as you would put in any other HTML page. ..... and more.
Skip to content
Home » Despite vicious attacks on Israel by the media, the U.N. and Islamists, we continue to win!
Israel May Be Defeating Pan-Arab Rejectionism At Home and AbroadJacques Gautreaux2019-10-07T12:25:09-07:00 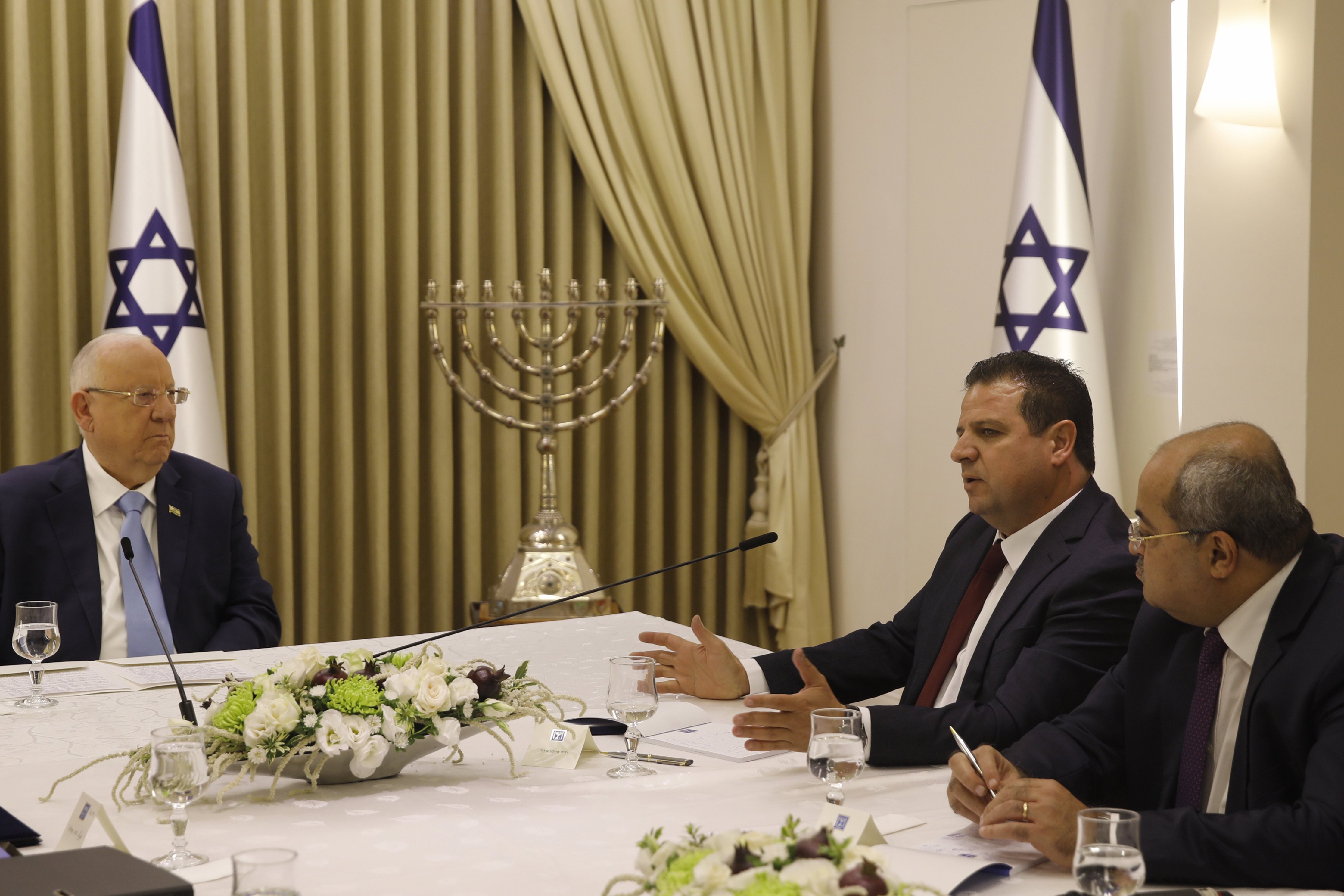 Israeli President Reuven Rivkin meets with Arab Joint List leader Odeh for his recommendation on who should become Israel’s next Prime Minister. For the first time in a quarter-century, the Arab leadership endorsed a Jewish candidate, Benny Gantz.

Israel May Be Defeating Pan-Arab Rejectionism At Home and Abroad

Pan-Arab rejectionism of Israel has recently shown serious signs that it is becoming a spent force.

Many Arab governments, including Saudi Arabia, Egypt and the Gulf States have begun interacting with Israel on the diplomatic, security and economic fronts in ways that were unimaginable just a few years ago.

The Palestinian Authority has made a major concession (of sorts) to Israel, and even Israeli Arabs have decided that “if you can’t beat ’em, join ’em” may be the best policy now. This collapse of Arab—and even Palestinian—naysaying might indicate that fundamental changes are on the way for Israel and the cause of Middle East peace.

Clearly, the Arab world’s belief in the centrality of the Israel/Palestinian conflict is on the wane. Partly, this is due to the Iranian threat in the Middle East. But it also seems to reflect a growing feeling that Israel is unbeatable, the Palestinian cause is a loser, and Israel has much to offer the other peoples of the region.

In February, PA President Mahmoud Abbas was informed by Jerusalem that his Pay-for-Slay program would no longer receive a shekel of Israeli money. (Under Oslo, Israel collects taxes and duties for the PA, and then remits a monthly check to the PA in Ramallah.) Of the monthly $170 million, Israel began deducting $12 million—the amount the PA provided to the so-called Martyrs’ Fund which offers lavish lifelong stipends to terrorists who murder and maim Jews.

Astonishingly, Abbas announced at the time that he would refuse the remaining money coming from Israel “in solidarity with our heroes and martyrs.” This put the PA in a horrible financial hole. Abbas has pursued countless self-destructive policies, but this was a suicidal step too far, and his refusal of all of the PA’s tax revenue has endangered the solvency of his government.

It’s ironic that his agreement now to accept Israel’s partial remittance of money is considered to be a “concession” on Abbas’ part. But it is clear that he has faced reality for once and thrown in the towel on this issue.

Meanwhile, in Israel, Abbas’s Arab cousins—who are citizens of Israel—have moved in an unexpected direction of rapprochement with Zionist party leaders.

The addition of the 13-seat Joint List delegation would put Gantz quite close to the 61-seat majority needed to constitute a government, with Gantz as Prime Minister.

But—as with most things in Israeli politics—things aren’t nearly as simple as they seem at first glance.

Upon Odeh’s announcement of the Gantz endorsement, one of the Arab parties in his bloc rejected the move and withdrew its three new Knesset votes from the United List bloc.

Israel’s President Reuven Rivlin thus gave Netanyahu the mandate to try to create a government, since he had one more vote than Gantz in the area of endorsements—and, at any rate, the Arab Joint List members would not actually join a Gantz coalition to create a Knesset majority.

But the move by the Joint List to endorse a Jewish candidate for Prime Minister was stunning in itself. In 1992, the last (and only) time the Arab parties had endorsed a candidate to head the government, their designee was Yitzhak Rabin of the Labor Party. At issue was the ratification of the Oslo Accords, championed by Rabin.

Arab endorsement of Rabin enabled the passage of Oslo and the establishment of the Palestinian Authority. So the 1992 Israeli Arab decision to break with precedent made a good deal of sense for Israel’s Arab community and their brethren in the disputed territories. (You’re welcome to question whether Oslo was good for Israel, but it was certainly embraced at the time in Israel and abroad.)

No such urgent issue is presenting now . Gantz is as passionate a Zionist as Netanyahu. His policies on the handling of the territories and the security needs of Israel are largely indistinguishable from Netanyahu’s. So why has the Arab Joint List endorsed Gantz? What does it say about Israel’s Arab community, roughly 20% of the country’s population?

Partly, it is a matter of pure Arab hatred of Netanyahu. Netanyahu’s stark policies for the past decade—as well as his verbal attacks on Israeli Arabs—have motivated an “anyone-but-Bibi” attitude among Israeli Arab leaders. Gantz just happens to be the vehicle that might be able to drive Netanyahu out of power.

But the Arabs’ participation in Zionist politics also says something about the evolving condition of Israel’s Arab minority. Polls reveal that most Israeli Arabs have no desire to leave. Prospects for education and employment in Israel dwarf those of any other Middle East country.

As flawed as Israel may be in the eyes of Israeli Arabs, it is clearly far superior to the illiberal and corrupt kleptocracy of the Palestinian Authority , or the bloody terrorist dictatorship of Gaza’s Hamas.

It seems to be dawning on them that fuller inclusion in the benefits of Israel involves fuller participation in “Zionist” politics. It’s hard to be heard when you refuse to take a place at the table. This was the message that was evident in the Joint List’s explanatory op-ed in the New York Times.

The schism in the Joint List reveals that everything hasn’t changed, but there may be a thawing in the attitudes of many Israeli Arabs toward the “Zionist entity” and the society it has built.

In the turbulent waters of Israeli politics and statecraft, any signs of positive movement should be celebrated. It may be that Israel has finally convinced all (or most) Arab leaders that it is there to stay and has much to offer.

If the Joint List’s willingness to participate in the Israeli post-election jostling with the Zionists extends beyond Bibi-aversion; Abbas’ willingness to “accept” Israel’s payments indicates an understanding that Israel must be dealt with using a modicum of respect; and the Arab world’s collaboration with Israel continues—Israel may have finally set the Middle East on paths to peace and mutual support.

In discussions with friends, family and colleagues, emphasize to them that the willingness of the Arab world to play civilized roles in relation to Israel might indicate that Israel’s policies and many assets have created a true path to peace—in Israel and abroad.

I hope you’ll also take a minute, while you have this article front and center, to visit FLAME’s lively new Facebook page, as well as review the P.S. immediately below. It describes FLAME’s new hasbarah campaign—a refutation of the myth of “Palestinian territories.”