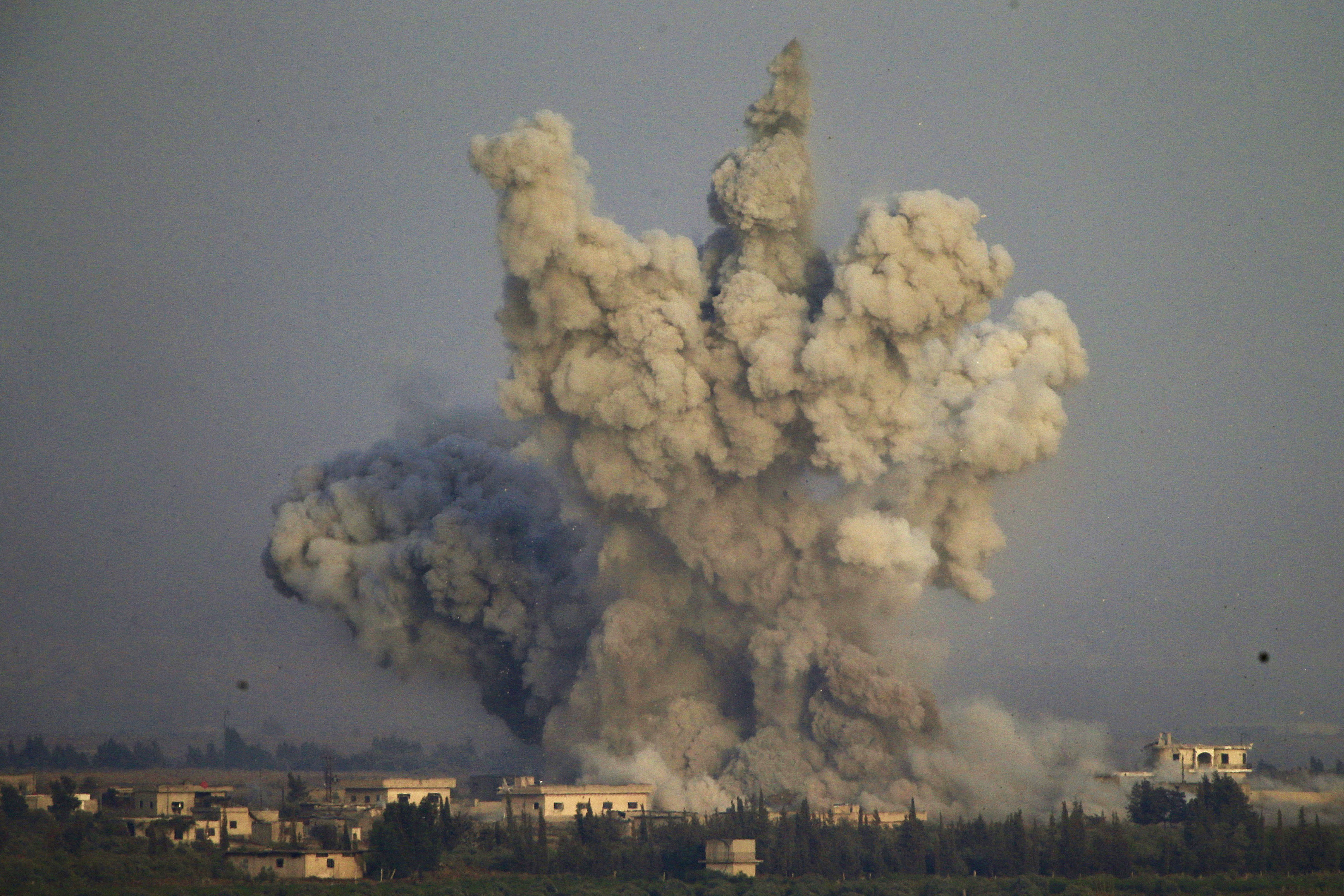 View from the Golan Heights in Israel of explosions from fighting between militias loyal to Syrian President Bashar Assad and rebels in southern Syria. Israel is determined to keep Iranian forces at a distance from this region.

Four million years ago, a massive volcanic eruption northeast of the Sea of Galilee created a hilly plateau known as the Golan Heights. Things have gotten more stable geologically speaking, but a severe military eruption may well be on the horizon.

Today, Iran’s military presence in Syria threatens to light an explosive fuse on Israel’s northern frontier. While it’s 1,000 miles from Iran to Israel, it’s less than 50 miles from the Iranian Army to Israel’s Golan Heights.

Syria’s Civil War has moved next to its southeast border with Israel, and the Syrian government’s 70,000 Iranian-controlled forces are knocking on Israel’s northern door—especially considering its recent missile attack on the Golan.

Iran’s stated intention is exterminating Israel. America and the world (and we pro-Israel advocates!) must demand the removal of Iran’s military presence from Syria.

In 1948, during Israel’s War of Independence, Syria took control of the Golan Heights. Syrian artillery barrages on low-lying Israeli towns in the area continued for two decades.

In 1967, Syria invaded Israel from the Golan Heights but was repulsed. Israel won the territory and annexed it in 1981, having realized the hard way that holding this high ground is a key to its survival.

Despite Israel’s control of the Golan Heights, nearby Iranian rockets can attack the summit and even leapfrog those strategic peaks.

What’s more, just a dozen miles to the west of the Golan, Israel has suffered the lethal threat of Hezbollah missile fire from the Lebanese border on Israel’s northern population. Today, Hezbollah, Iran’s proxy, has 120,000 rockets aimed at Israel from Lebanon.

If Iran can control the area near the Golan Heights and position missile launchers, Israel will face two northern fronts: the “Lebanese” Hezbollah and the “Syrian” Iranian forces. Israel’s entire northern border would be a two-front tinderbox waiting to explode.

So far, the Israeli Air Force vigorously responded to incursions from Syrian and Iranian forces. Israel’s Defense Minister Avigdor Liberman last week again warned Syrian disputants to keep their distance: “This attempt to establish terror infrastructure in the Syrian Golan Heights under the regime’s purview is unacceptable to us. We will operate with full power against any terrorist infrastructure we identify in the area.”

The dangers to Israel—and the entire region—are obvious and urgent and require that the U.S. act now to defuse this Iranian time-bomb.

This need is highlighted by Iran’s dangerous, imperialist strategy, which is astutely analyzed in this week’s FLAME Hotline-featured article by Yaakov Lappin of the Begin-Sadat Center for Strategic Studies. Lappin provides ample detail on how Iran continues to encroach on Israel’s security and why it’s critical that Israel—and the West—resist Iran’s plans.

I hope you’ll forward this incisive perspective to friends, family and fellow congregants to help them understand why the U.S. should support a strategy of increased pressure on Iran—and its allied Hezbollah militias—to leave Syria, for the sake of Israel’s security and peace in the region.

Israel’s Active Defense Campaign in Syria: The Next Phase

Judging from international media reports, Israel’s campaign to keep Iran out of Syria has entered a new phase. In the previous phase, Tehran had injected its own Islamic Revolutionary Guards Corps (IRGC) forces into Syria, where they proceeded to build drone, missile, and infantry bases. Iran’s grander ambition is to set up naval and air force bases on Syrian soil as well. In addition, it wants to flood the country with projectile launchers and terrorist cells that would assault Israel in the future.

In an effort to deter Israel from continuing with its campaign and force it to accept Tehran’s military presence in Syria, the IRGC’s Quds Force began directly attacking Israel, using drones and truck-mounted mobile rocket launchers. This represented a break from the older Iranian pattern of waging aggression via proxy.

The confrontation ended with a resounding defeat for Iran when, on May 10, the Israel Defense Forces destroyed more than 50 Iranian military targets scattered across Syria. Israeli air defenses also successfully dealt with an Iranian rocket barrage over the Golan Heights.

Iran’s decision to use its own forces to directly attack Israel proved to be a strategic error: it exposed the Iranian assets to Israeli firepower and saved Israel the trouble of having to deal with Iran’s proxies. It also underlined Israel’s solid intelligence coverage of Syria. Israel used the event to send a firm message to Tehran about its willingness and ability to enforce its red lines in its own backyard.

A secondary message was sent to the Assad regime, which tried to shoot down Israeli fighter jets on May 10 using a combination of surface-to-air missile batteries (SA-5s, 17s, and 22s). Every battery that took part in an attack on Israeli aircraft was destroyed. In total, more than half of the Assad regime’s air defenses have been knocked out by Israel in recent months.

Yet, as the latest international media reports indicate, Tehran has not given up. It has merely switched tactics. Iran is still seeking to establish a foothold in Syria but is now relying more on its militias, a development that marks a return to the older proxy model.

Iran may have switched gears, but Israel’s defensive campaign appears to be responding to it in the same way. In mid-June, according to international media reports, Israel conducted a major airstrike on a military base housing the Iran-backed Katai’b Hezbollah, an Iraqi Shiite militia. The airstrike occurred in eastern Syria, near the Iraqi border. This is the area where Iran is trying to build a land bridge to link it directly to Syria and Lebanon via Iraq.

Dozens of militia members were reportedly killed in the attack. At the start of July, according to media reports, a blast rocked an arms depot belonging to an Iran-backed militia in Daraa, in southern Syria, where the Assad regime is involved in a major push to retake the area from Sunni rebel groups.

It is worth recalling that leaders of Iran-sponsored militias have, in recent months, visited Lebanon, where they were given tours of the Israeli border by Hezbollah and made threats that they would take part in future fighting against Israel.

An airstrike rocked the Damascus airport at the end of June, reportedly targeting an Iranian missile transfer.

Iran has for years been trying to use Syria to transit advanced weapons to Hezbollah in Lebanon.

More recently, it tried to assemble missile bases in Syria itself and build a new arsenal to point at Israel. Iran wants the new missiles in Syria to join the estimated 120,000 Hezbollah projectiles already stationed in Lebanon.

Israeli officials have stated that they will not let Iran turn Syria into a second Lebanon. Such statements appear to be backed with consistent action.

One initial conclusion that can be reached from the recent reports is that Iran is trying to change its modus operandi in Syria to avoid Israeli strikes, but that these efforts have not been successful.

A second conclusion is that Iran is reluctant to activate Hezbollah against Israel right now. Generally speaking, Tehran seems deterred at this time from taking a risk big enough to spark a regional war with Israel – but it still wishes to build up a military basis in Syria for future aggression.

Following the losses it incurred in May, Iran seems to be more aware of the risks involved in directly confronting Israel and is thus falling back on militias, as well as weapons trafficking, to lower the stakes. But it is continuing its efforts to take over Syria militarily, meaning the threat of a wider confrontation has not vanished by any means.

Iran’s calculations cannot be divorced from other strategic developments, such as the cancellation of the nuclear deal by the Trump administration, internal unrest, and economic troubles.

Despite growing pressure, Iran has signaled that it refuses to be rolled back to its own borders, meaning the potential for escalation remains.

The Israel Air Force (IAF) is in charge of rapid responses to Iran’s activities. The IAF has been able to keep up a very high operational tempo while displaying flexibility in its policing of Israel’s security interests in Syria.

Russia, which is the senior partner in the pro-Assad coalition, appears to have reluctantly accepted Israel’s activities despite protesting them, and despite concerns that the Iranian-Israeli conflict could spin out of control without warning. That scenario could bring down the Assad regime.

The IAF has had to learn how to fly in the region in a way that evades Russia’s considerable intelligence-gathering abilities.

The growing Israeli F-35 squadron, now at 12 jets, and the IAF’s ability to keep upgrading its older, legacy F-16 and F-15 aircraft, have meant that Israel’s regional air superiority has been maintained so far in the face of increasing challenges.

The Syrian war appears to be winding down, and Hezbollah is reportedly beginning to withdraw some of its forces from Syria and deploy them back to its southern front against Israel. This means Hezbollah will soon be less stretched along two fronts.

That could free up resources and lead Hezbollah to feel more confident about both provoking Israel in the near to medium term and responding to Israel’s low-profile campaign in Syria. Such a scenario, though not likely, must be taken into consideration, as it would represent a dangerous departure from the status quo.

Because of the inherent explosiveness and instability of the region, Israel takes a calculated risk every time it pursues its “active defense” campaign in the northern arena. But the risk of not acting and allowing the Iranian axis to build up its force freely, is far greater.

For Israel, failure to act would mean facing two Iranian mass missile fronts, in Lebanon and Syria, which would represent an intolerable threat to Israel’s home front.

Israel’s campaign not only contains the threat from the north. It also serves to continually remind the Iranian axis of Israel’s own evolving capabilities, thereby replenishing Israeli deterrence and keeping full-scale war at bay.