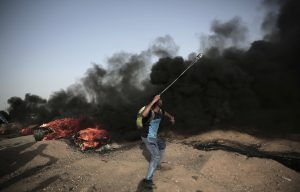 Last week, a young Syria man tried to sneak across the border between Syria and Turkey. Unsurprisingly, he was shot dead by Turkish border guards. We didn’t read about this incident because the mainstream media have no interest in Muslims being killed by Muslims for violating borders.

But when Arabs violently attack Israel’s borders—and refuse to back off despite numerous warnings and deterrents such as rubber bullets and tear gas—then are shot and killed, suddenly it’s a war crime worthy of U.N. inquiry. Indeed, the notoriously anti-Israel U.N. Human Rights Council has already begun such an inquiry—into Israel’s actions, but not Hamas’s.

Ultra-left Amnesty International claims Israel is using “excessive deadly force against protesters, including children, who merely demand an end to Israel’s brutal policies towards Gaza.” Socialist Senator Bernie Sanders believes the key issue on the Gaza border is “the right of all people to protest for a better future without a violent response.”

Amnesty and Bernie seem to have missed key memos from leaders of the terrorist group Hamas, which organized last week’s riots. The “March of Return,” as Hamas calls it, has nothing to do with Israel’s policies toward Gaza, but rather constitutes what Hamas political chief Ismail Haniyeh calls “the beginning of a return (of the Palestinian people) to the entirety of the land of Palestine.” Haniyeh means the entirety of Israel, as well as Judea and Samaria (aka, the West Bank). The brutality Amnesty refers to is obviously the mere presence of Jews in their own ancient and current homeland.

The better future that Sanders speaks of is clearly a future without Jews in the Holy Land—because that is precisely what Hamas’s charter calls for.

While Amnesty faults Israel for firing at terrorists where children are present, Amnesty apparently sees no problem with Hamas (and kids’ parents) who send their children into a war zone to be used as human shields for men using wire cutters to destroy Israel’s border fence. Which in fact is a war crime.

As for the peacefulness of the protests, military head of Hamas, Yehia Sinwar, urged the rioters to tear down the border fence to Israel and tear out the hearts of Israelis. Sinwar sounds nothing like peaceful demonstrator Martin Luther King.

If this blindness to or blatant disregard for the facts of the Gaza uprising seem absurd, they are also painfully familiar. They reflect the shameless bias of mainstream media against Israel and the effectiveness of Hamas’s cynical public relations tactics. Hamas violently attacks Israel, Israelis are blamed for disproportionate response.

This brings us to our FLAME Hotline-featured article (below) by Ron Dermer, Israel’s ambassador to the United States. Dermer argues that Israel would rather keep its people safe than worry about headlines in the media, which is certainly the correct priority—the same one I hope the U.S. government would set if my family and I were being threatened by terrorists trying to swarm over the Mexican border.

Dermer puts the blame on Hamas for the deaths of its people, but he also blames the media for playing into Hamas’s PR ploy. By giving Hamas exactly what they’re bargaining for, the media actually encourage more Palestinians to risk—and sometimes lose—their lives in futile attempts to “return” to Israel, a land that 99% of them have never set foot in.

I hope you’ll forward this sober perspective to friends, family and fellow congregants to help them understand why Israel is doing the right thing on the Gaza border and why Hamas should be condemned.

Stop demonizing Israel for defending itself

It doesn’t look good on CNN, but Israel has to protect its citizens

Hand it to Hamas. As this week’s events in Gaza showed, the terrorist organization committed to Israel’s destruction can still manipulate the media into demonizing Israel for the legitimate actions it takes to defend itself.

Hamas’s four-step formula for success is by now familiar. First, get a media that is largely hostile toward Israel, simply ignorant or both to ignore Hamas’s genocidal goals and excuse its terrorism. Second, put Palestinian civilians in harm’s way. Third, force Israel, while defending itself, to kill some of those civilians. Fourth, rely on that same hostile and ignorant media to blame Israel for these deaths.

In Gaza, step one began some seven weeks ago. Hamas called for tens of thousands of Palestinians to join a weekly “March of Return“—effectively, the flooding of Israel with millions of the descendants of Palestinian refugees from the War of Independence (which five Arab nations started, promising to throw the Jews into the sea).

The March of Return was to culminate in a mid-May march on “Nakba” day, which Palestinians mark each year to remember the “catastrophe” of Israel’s creation.

Palestinian “marchers” were told to break down the security fence separating Gaza from Israel, a clear and present danger to all those living in Jewish communities only hundreds of yards from that fence.

Yahya Sinwar , the leader of Hamas in Gaza, could not have been clearer about his goals : “We will take down the border and tear out their hearts from their bodies.”

But as thousands of Palestinians showed up to achieve that murderous goal, the media was determined to tell another tale. Press reports insisted that the march was “against the occupation” and “for humanitarian relief ” in Gaza. Such nonsense continued even as rioters destroyed the very infrastructure that enables Israel to deliver food, medicine and supplies into Gaza.

This week, the media narrative shifted. Despite all evidence to the contrary, suddenly we were told that the riots in Gaza were against the opening of the U.S. Embassy in Jerusalem. “Marches over embassy move take on violent edge” read a headline in The Post, one of many similar headlines around the globe.

The media also insisted that these riots had been peaceful protests, or “mostly” peaceful, whatever that means. Apparently, grenades , Molotov cocktails , fire kites, explosive devices, guns and machetes don’t quite hit the media’s bar for what constitutes Palestinian violence.

Mahmoud Zahar, one of Hamas’s founders, said that calling what happened in Gaza peaceful protests was a clear “deception .” In Facebook posts , Hamas called for the rioters to “bring a knife, dagger or gun,” and embedded its own forces in the crowds, ready and willing to kill and kidnap Israelis. Not surprisingly, these facts barely merited a mention in the news coverage.

With the media playing ball, the stage was then set for step two—putting Palestinians in harm’s way. Hamas pushed the Palestinian masses toward the fence, falsely claiming that Israeli soldiers were abandoning their positions and that the fence had already been breached.

Step three was inevitable. Once nonlethal means, from fliers to tear gas, were exhausted, the choice for Israel’s army was simple: Let a violent mob of thousands of people breach the fence, exposing the surrounding Jewish communities to the risk of slaughter, or defend those communities with lethal force.

That choice is no choice at all.

The stage was set for the critical final step—get a biased media almost always ready to believe the worst about Israel to demonize Israel. Just like the blood libels of old, Israel was falsely and widely accused of perpetrating a massacre.

Now that the libel against Israel has spread around the world, the truth is beginning to get its boots on. A senior Hamas official said that 50 out of the 62 dead were members of Hamas. Those figures would make the Israeli military operation to stop a violent mob of thousands of people trying to infiltrate our border under a dense cloud of smoke arguably one of the most surgical in history.

While one journalist and a British member of Parliament who rushed to condemn Israel have apologized, others are unlikely to follow. Most of those in the media who constantly target Israel will probably not give a second thought to the damage they have caused.

But they should. Because while they cause damage to my country’s reputation, they actually cost Palestinian lives. By proving to Hamas that the media can be manipulated time after time, the media is only encouraging Hamas to continue to employ this ghoulish strategy.

How to keep this from happening again? Hamas could stop being Hamas. But that is unlikely to happen.

Israel could stop defending itself. But that will never happen. As has been said: Better bad press than a good eulogy.

But there is another way to put an end to this despicable practice: The media can stop demonizing Israel for defending itself. By not giving Hamas the PR victory it seeks, the media would actually be doing something to save innocent Palestinian lives rather than being complicit in their tragic deaths.