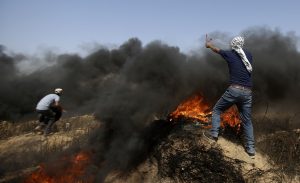 Peaceful Demonstrations? Arabs launch stones, Molotov cocktails, pipe bombs, arson kites and mortars at Israeli soldiers on the Gaza border during The March of Return, intended to “reclaim” all of Palestine, including Israel, for Arabs.(AP Photo/Adel Hana)

The hostility of many media toward Israel is so intense that they are willing to look violence in the eye in Gaza and call it peaceful.

Such was the black-is-white description the media have been shoveling at us for the past few weeks until, seemingly, Arab violence became so pronounced and constant that the media could no longer deny it.

Even in the face of mounting Arab use of Molotov cocktails, pipe bombs and arson kites against Israeli soldiers, CNN with no trace of shame claimed riots on the Gaza border were “mostly peaceful.” Over the last few weeks, the Arabs have raised the ante by launching missiles and mortars at Israeli civilians in villages many miles from the borders.

Likewise, the motivation behind the riots: NPR and many other media tried to convince us that the Arabs were protesting either the Gaza blockade (only Israel’s role in it, not Egypt’s or the Palestinian Authority’s, apparently) or President Trump’s relocation of the U.S. embassy to Jerusalem.

The only problem with those explanations was that the Arabs kept insisting The March of Return really was a march of return—an attempt to “repatriate” millions of Arabs into Israel by tearing down the fences and overrunning Israel’s border.

Since the media (and Israel’s European “friends”) could no longer deny either the violent means or the nefarious goals of the riots, their tone changed. Now the media and the Europeans began demanding “restraint” and “proportionality” on Israel’s part.

Now, presumably, if an Arab throws a pipe bomb, cuts through the border and runs toward an Israeli kibbutz waving a knife and yelling “Allhu Akbar,” Israel is supposed to arrest him—either before or after he kills an Israeli citizen.

Or if Hamass terrorists shoot rockets at Israeli elementary schools and miss their target, Israel should launch missiles that likewise don’t hit any Hamas targets?

If this absurdity were not grounded in journalistic and political policies more biased and unfair against the Jewish state than against any other nation on earth, it would be humorous. As it is, Israel’s treatment by the media and the Europeans is simply disgraceful—a travesty.

This week’s FLAME Hotline-featured article (below), by commentator Evelyn Gordon, provides a sterling example of this prejudice. Gordon unwraps the non-story of the Arab baby Layla, who apparently died of tear gas inhalation close to the Gaza border in the midst of the riots.

The hand-wringing liberals in the media and Europe quickly joined Hamas in accusing Israel of child murder. However, a Gazan doctor soon clarified that the child had congenital heart disease, which was exacerbated by tear gas being used to quell the Arab rioters.

Gordon then neatly turns the story on its head, pointing out that even if the child had died solely from the tear gas—as the bleeding hearts had believed—Israel would have been blameless. Israel was only trying non-violently to control the rioters, as the liberals insists it should.

The real question—which the Israel haters never asked—is, “what the heck was a baby doing on the front lines of a violent riot atop an international border?

I hope you’ll forward this expose to friends, family and fellow congregants. It will help them understand how the media and many liberals contort themselves so grotesquely to impugn Israel’s integrity in the face of a terrorist attack on its sovereignty.

If there’s one thing Israel advocates agree on, it’s that Israel lost the PR war over May 14’s violent demonstrations in Gaza. Everybody from the U.N. Security Council to a New York public high school mourned the 62 Palestinians killed as innocent victims, even though 53 belonged to terrorist organizations. And with Hamas planning another demonstration on Tuesday, a battle has been raging over whether the PR war is inherently unwinnable or if Israel’s public diplomacy was simply incompetent.

The correct answer is both. And nothing better illustrates this than the story of the Palestinian baby allegedly killed by Israeli tear gas.

Israel’s critics immediately seized on the death of 8-month-old Layla Ghandour as proof of its malfeasance. As the New York Times wrote , “The story shot across the globe, providing an emotive focus for outrage at military tactics that Israel’s critics said were disproportionately violent.” The Times of Israel noted that “Her funeral was filmed and featured on global TV news broadcasts and newspaper front pages.”

Soon afterward, however, a Gazan doctor suggested that she most likely died of a congenital heart defect rather than anything Israel did (a theory later apparently accepted even by Gaza’s Hamas-run Health Ministry, which last week removed Ghandour from its list of people killed by Israel).

What happened next was surreal: The doctor’s explanation was immediately seized on and disseminated worldwide by both official Israeli spokesmen and Israel supporters overseas as if it somehow mattered whether Ghandour was killed by tear gas or a congenital heart defect. In other words, Israel and its supporters implicitly accepted the view of the anti-Israel mob. Had the baby truly been killed by Israeli tear gas, presumably Israel could legitimately have been considered culpable.

What they should have pointed out instead is that Ghandour’s story proves just how dishonest all the critics accusing Israel of disproportionate force are. After all, ever since the weekly demonstrations along the Gaza border began in March, these critics have claimed that they don’t deny Israel’s right to protect its border. They merely demand that it restrict itself to nonlethal crowd-control measures rather than resorting to lethal force. As the New York Times put it in an April editorial , “Israel has a right to defend its border, but in the face of unarmed civilians it could do so with nonlethal tactics common to law enforcement.”

For now, leave aside that “unarmed civilians” lie. The more important point is that tear gas is exactly the type of nonlethal crowd control measure commonly used by law enforcement agencies. So if Israel’s critics meant what they said about its right to defend the border by nonlethal means, the death of a baby during a violent demonstration along the border might be a tragedy, but it wouldn’t be Israel’s fault. It would be the fault of the relatives who deliberately brought her into the heart of that violent demonstration, despite knowing Israel was using crowd-control measures to keep protesters from breaching its border.

Instead, Israel’s critics treated Ghandour’s death as proof of Israel’s evil. In other words, they effectively declared that Israel had no right to defend its border by any means whatsoever—even with non-lethal means like tear gas—unless it could somehow achieve the impossible feat of guaranteeing that no Palestinian would ever be killed under any circumstances. And if the only way Israel can win the PR war is leaving its border completely undefended, that war would indeed be inherently unwinnable; at least, among this portion of its critics.

But many people do understand that leaving a border undefended against angry mobs isn’t a tenable option. If Israeli public diplomacy had been even minimally competent, it would have made clear that this is the logical implication of blaming Israel for Ghandour’s death.

On May 14, as in all the preceding weeks, there were actually two demonstrations taking place. One, which was largely peaceful, was hundreds of meters from the border fence. The other, which was right up against the fence, was anything but peaceful. Members of terrorist organizations threw bombs, Molotov cocktails, and slingshot-propelled rocks at soldiers. They flew incendiary kites across the border to set Israeli fields ablaze ( to date , some 300 of these kites have ignited 100 fires, destroyed more than 3,000 acres of wheat and caused millions of shekels worth of damage). They vandalized the fence and tried to break through it. These are the “demonstrators” Israel targeted with measures ranging from tear gas to, when necessary, live fire, as evidenced by the fact that 53 of the 62 killed belonged to terrorist organizations.

Baby Layla was taken to the nonviolent protest by her 12-year-old uncle, who mistakenly thought her mother was there. Upon discovering his mistake, he responsibly kept her in the nonviolent section until late afternoon, when she began crying. Then, wanting to hand her off to an older relative, he “pushed forward into the protest in search of her grandmother, Heyam Omar, who was standing in a crowd under a pall of black smoke, shouting at Israeli soldiers across the fence,” the Times reported. Panicked by Layla’s crying, he deliberately brought her into the most violent part of the protest, where Israel was exercising its legitimate right of self-defense and where no baby should ever have been. And she died.

But even if it was Israeli tear gas that killed her, Israel cannot be held culpable for her death unless you start from the premise that it had no right whatsoever to defend its border against violent attacks of the type launched during this protest, even by the most nonlethal of means. That, of course, is precisely what many of Israel’s critics do think. And this is the point that Israel and its advocates should have been hammering home.