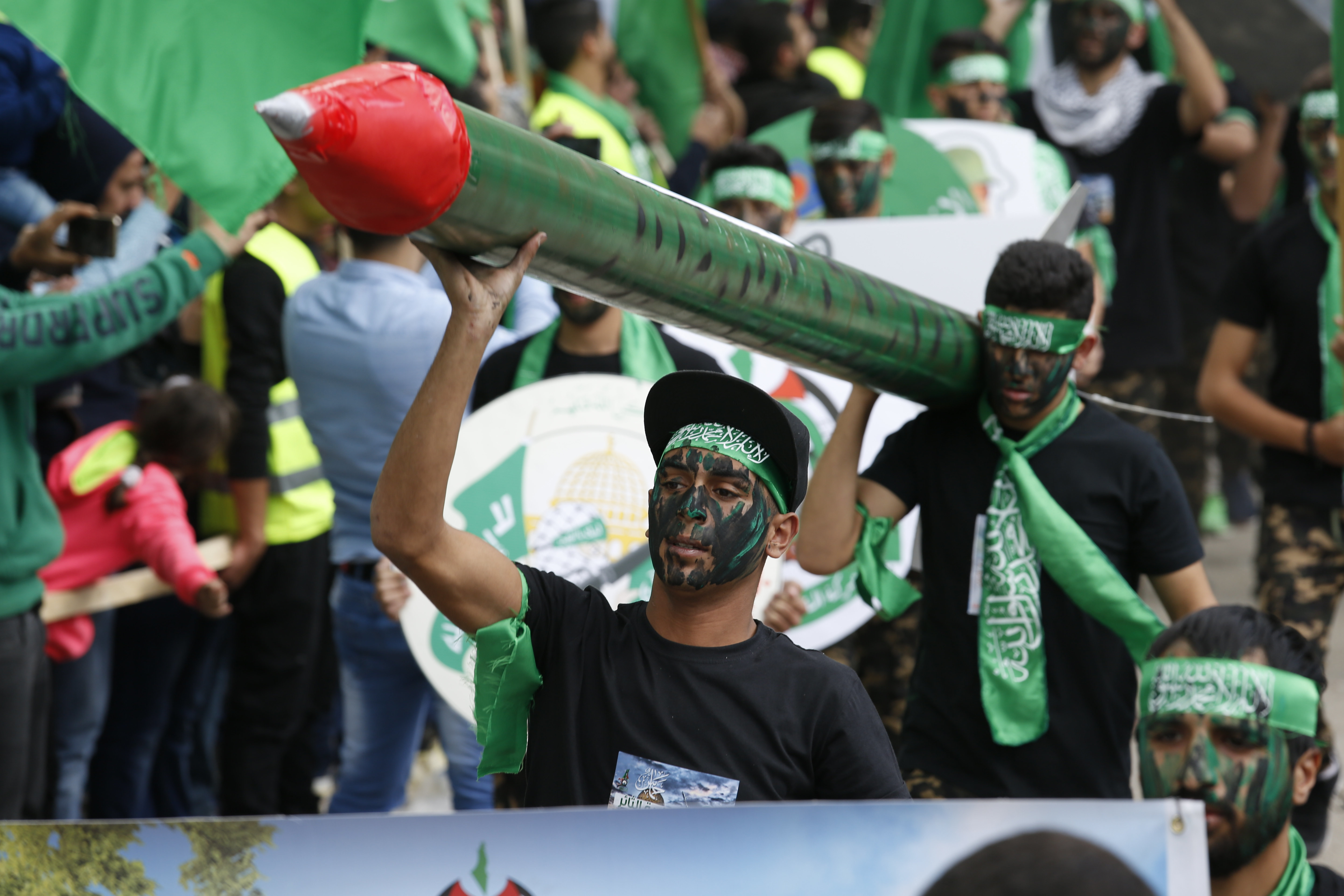 Imagine: You are sitting down to dinner with your family. Suddenly you receive a text message:  Code Red Alert! Missiles will start falling in your area in 15 seconds and you must seek immediate shelter. You scoop up your frightened children and run, panicked, to a nearby bomb shelter, hoping the rockets will miss you this time

Tens of thousands of Israelis have experienced such terror attacks—and run-for-your-life horror—in recent weeks. And why? Because, despite crushing poverty among its people and an objectively lost military cause, Hamas obsessively insists on playing out futile attempts to destroy Israel, no matter what the cost.

Indeed, Hamas spokesman Ahmed Abu Artema admits that even the PR value of Hamas’ recent March of Return—which started current hostilities—has turned negative.  No wonder. The Palestinians have lost 200 lives and suffered more than 7,000 casualties since Hamas launched this current round of fighting. Despite hundreds of Hamas rockets and hundreds more arson kites, Israel has lost only one soldier—to a sniper’s bullet.

In reality, Hamas’ strategy seems to be just another form of suicide intifada—in this case mass suicides—resulting from thousands of lightly armed terrorists throwing themselves at the bulwarks of a modern army.

Nonetheless, Israelis clearly will not countenance missile attacks on its populace indefinitely. Prime Minister Netanyahu and Defense Minister Avigdor Liberman are under intense pressure to bring Hamas attacks to an instant halt.

The mayor of Sderot, one of the Gaza border towns hit most often by Hamas rockets, said, “I understand the desire to engage in negotiations, but . . . the ceasefire is a mistake. This situation of on-and-off war is not healthy for us or for the State of Israel.”

Other Israeli and American commentators have recommended that Israel consider putting Hamas out of business and retaking Gaza—clearly an extreme and in many ways undesirable solution.

Yet despite current Egyptian-led efforts to facilitate a five-year peace agreement between Israel and Hamas, prospects for success look scant to impossible.

Which brings us to this week’s FLAME Hotline-featured article (below) by Efraim Karsh, director of the Begin-Sadat Center for Strategic Studies and emeritus professor of Middle East and Mediterranean studies at King’s College London.  Karsh argues forcefully that no amount of development aid or other material inducements are likely to sway Hamas from its kamikaze course—because the only acceptable solution for Hamas is that Israel be destroyed

Karsh concludes that a respite to the terror will only occur when the Palestinian people of Gaza rise up against their fanatical oppressors.

As usual, I hope you’ll forward this insightful analysis to friends, family and fellow congregants.  It may help them understand how Israel is being forced into seemingly “disproportionate” actions to stop the persistent, irrational bombing of its citizens.

I hope you’ll also visit FLAME’s new Facebook page, as well as read the P.S. below, which announces a new FLAME hasbarah message on the outrageousness of expecting Israel to make peace with the Palestinians anytime soon.

President, Facts and Logic About the Middle East (FLAME)

P.S.      You’ve probably read about the new peace plan expected from the Trump administration, possibly coming in next few weeks or months. We at FLAME believe such a proposal—no matter what it’s tenets—will be a mistake, if for no other reason than that the autocratic governments of both Palestinian factions are currently unequipped and unsuited to be Israel’s partners in peace. That’s why FLAME has created a new editorial message—“Peace with Palestinian Dictators?”—which will soon run in mainstream magazines and newspapers, including college newspapers, with a combined readership of some 10 million people. In addition, it will be sent to every member of the U.S. Congress and President Trump. If you agree that this kind of public relations effort on Israel’s behalf is critical, I urge you to support us. Remember: FLAME’s powerful ability to influence public opinion—and U.S. support of Israel—comes from individuals like you, one by one. I hope you’ll consider giving a donation now, as you’re able—with $500, $250, $100, or even $18. (Remember, your donation to FLAME is tax deductible.) To donate online, just go to donate now. Now, more than ever, we need your support to ensure that the American people, the U.S. Congress and President Trump stay focused on the true obstacle to peace, which is the lack of a credible Palestinian peace partner.

As of today, more than 15,000 Israel supporters receive the FLAME Hotline at no charge every week.  If you’re not yet a subscriber, won’t you join us in receiving these timely updates, so you can more effectively tell the truth about Israel?  Just go to free subscription.

It Is Not the Economy, Stupid

So long as Gaza continues to be governed by Hamas’s rule of the jungle, no Palestinian civil society, let alone a viable state, can develop.

No cliché has dominated the discourse on the Gaza situation more than the perception of Palestinian violence as a corollary of the Strip’s dire economic condition. No sooner had Hamas and Israel been locked in yet another armed confrontation over the past weeks than the media, foreign policy experts and politicians throughout the world urged the immediate rehabilitation of Gaza as panacea to its endemic propensity for violence. Even senior members of the Israel Defense Forces opined that a “nonmilitary process” of humanitarian aid could produce a major change in the Gaza situation.

While there is no denying the argument’s widespread appeal, there is also no way around the fact that it is not only completely unfounded but the inverse of the truth. For it is not Gaza’s economic malaise that has precipitated Palestinian violence; rather, it is the endemic violence that has caused the Strip’s humanitarian crisis.

For one thing, countless nations and groups in today’s world endure far harsher socioeconomic or political conditions than the Palestinians, yet none have embraced violence and terrorism against their neighbors with such alacrity and on such a massive scale.

For another thing, there is no causal relationship between economic hardship and mass violence. On the contrary, in the modern world it is not the poor and the oppressed who have carried out the worst acts of terrorism and violence but, rather, the militant vanguards from among the better educated and more moneyed circles of society, be they homegrown terrorist groups in the West or their Middle Eastern counterparts.

Yasser Arafat, for instance, was an engineer, and his fellow arch terrorist George Habash—the pioneer of aircraft hijacking—a physician. Hassan al-Banna, founder of the Muslim Brotherhood, was a schoolteacher, while his erstwhile successor, Sayyid Qutb, whose zealous brand of Islam fired generations of terrorists, including the group behind the assassination of Egyptian president Anwar Sadat, was a literary critic and essayist. The 9/11 terrorists, let alone their multimillionaire paymaster, Osama bin Laden, as well as the terrorists who massacred their British compatriots in July 2005 and those slaughtering their coreligionists in Algeria and Iraq, were not impoverished peasants or workers driven by hopelessness and desperation but educated fanatics motivated by hatred and extreme religious and political ideals.

Nor has Hamas been an exception to this rule. Not only has its leadership been highly educated, but it has gone to great lengths to educate its followers, notably through the takeover of the Islamic University in Gaza and its transformation into a hothouse for indoctrinating generations of militants and terrorists. Hamas founder, Sheikh Ahmed Yassin, studied at the al-Azhar University in Cairo, probably the Islamic world’s most prestigious institution of higher religious learning, while his successor, Abdel Aziz Rantisi, was a physician, as is Hamas cofounder Mahmoud Zahar. The group’s current leader, Ismail Haniyeh, and Muhammad Def, head of Hamas’s military wing, are graduates of the Islamic University of Gaza, while Khaled Mashaal studied physics in Kuwait, where he resided until 1990. Hardly the products of deprivation and despair.

This propensity for violence among the educated and moneyed classes of Palestinian society was starkly reflected in the identity of the 156 men and eight women who detonated themselves in Israel’s towns and cities during the first five years of the “al-Aqsa Intifada,” murdering 525 people, the overwhelming majority of them civilians. A mere 9% of the perpetrators had basic education, while 22% were university graduates and 34% were high school graduates. Likewise, a comprehensive study of Hamas and Islamic Jihad suicide terrorists from the late 1980s to 2003 found that only 13% came from a poor background, compared with 32% of the Palestinian population in general. More than half of suicide bombers had entered further education, compared with just 15% of the general population.

By contrast, successive public opinion polls among the Palestinian residents of the West Bank and the Gaza Strip during the 1990s revealed far stronger support for the nascent peace process with Israel, and opposition to terrorism, among the poorer and less educated parts of society—representing the vast majority of the population. Thus, for example, 82% of people with a low education supported the Interim Agreement of September 1995, providing for Israel’s withdrawal from the populated Palestinian areas of the West Bank, and 80% opposed terrorist attacks against Israeli civilians, compared to 55% and 65%, respectively, among university graduates.

In short, it is not socioeconomic despair but the total rejection of Israel’s right to exist, inculcated by the PLO and Hamas in their hapless West Bank and Gaza subjects over the past 25 years, which underlies the relentless anti-Israel violence emanating from these territories and its attendant economic stagnation and decline.

At the time of the September 1993 signing of the Israel-PLO Declaration of Principles, conditions in the territories were far better than in most Arab states—despite the steep economic decline caused by the intifada of 1987-93. But within six months of Arafat’s arrival in Gaza (in July 1994), the standard of living in the Strip fell by 25%, and more than half of the area’s residents claimed to have been happier under Israel. Even so, at the time Arafat launched his war of terrorism in September 2000, Palestinian income per capita was nearly double Syria’s, more than four times Yemen’s, and 10% higher than Jordan’s – one of the better-off Arab states. Only the oilrich Gulf states and Lebanon were more affluent.

By the time of Arafat’s death, in November 2004, his terrorism war had slashed this income to a fraction of its earlier levels, with real GDP per capita some 35% below the pre-September 2000 level, unemployment more than doubling, and numerous Palestinians reduced to poverty and despondency. And while Israel’s suppression of the terrorism war generated a steady recovery, with the years 2007-11 even recording an average yearly growth above 8%, by mid-2014 a fully blown recession had taken hold, especially in the Gaza Strip.

Indeed, apart from reflecting the West Bank’s basic socioeconomic superiority vis-à-vis Gaza, the widening gap between the two areas during the Oslo years (the difference in per capita income shot up from 14% to 141%) was a direct corollary of Hamas’s transformation of the Strip into an unreconstructed terrorism entity, in contrast to the West Bank’s relative tranquility in the post-al-Aqsa Intifada years.

This, in turn, means that so long as Gaza continues to be governed by Hamas’s rule of the jungle, no Palestinian civil society, let alone a viable state, can develop. Just as the creation of free and democratic societies in Germany and Japan after World War II necessitated a comprehensive sociopolitical and educational transformation, so, too, it is only when the local population sweeps its oppressive rulers from power, eradicates the endemic violence from political and social life, and teaches the virtues of coexistence with Israel that Gaza can look forward to a better future.