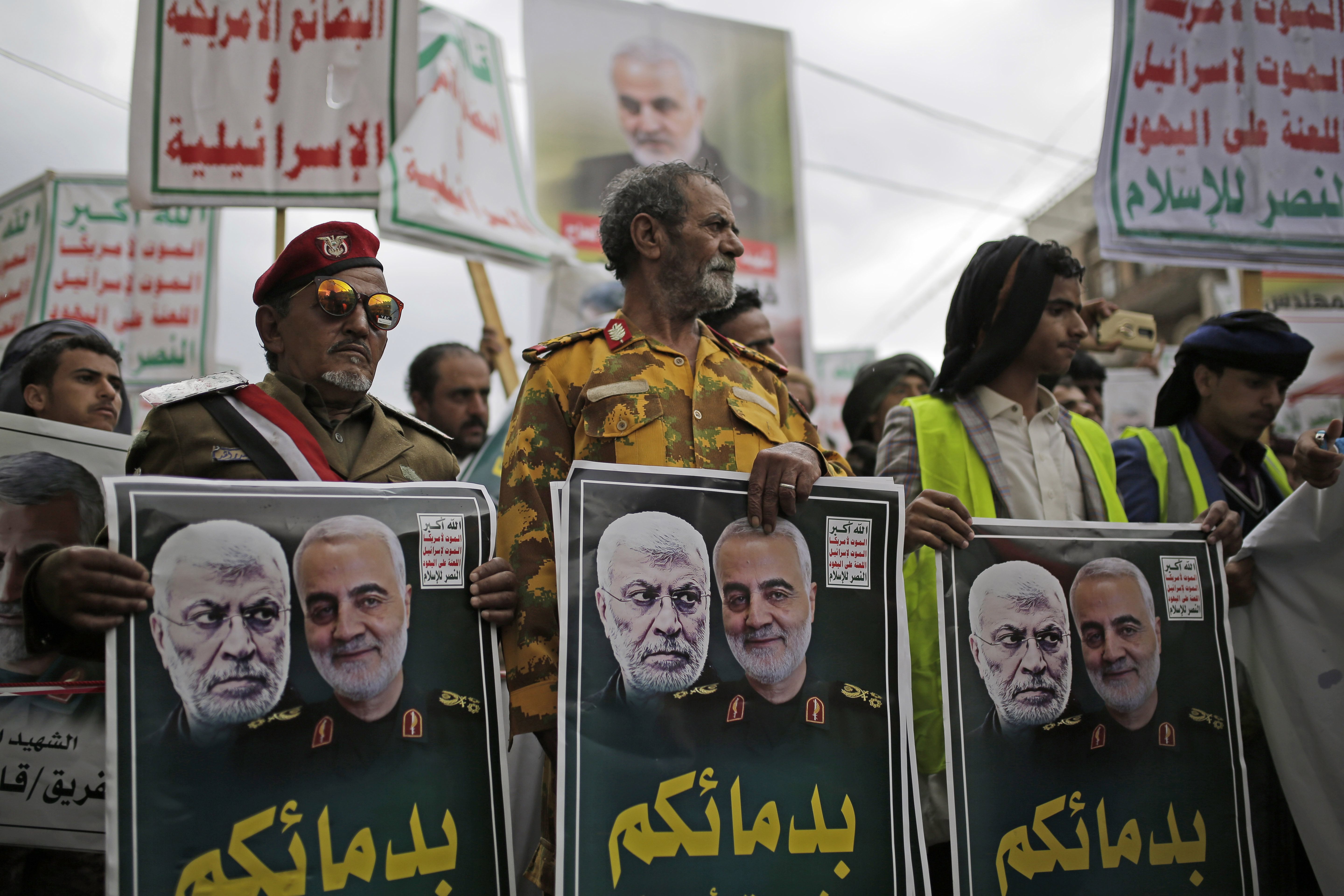 Yemeni Shiite Houti rebels mourn the termination of Iran’s top general Qassem Soleimani and his henchman Abu Mahdi al-Muhandis by a targeted U.S. missile strike. The two were in charge of Iran’s imperialist military projects in Lebanon, Syria, Iraq, Gaza and Yemen and responsible for hundreds of American deaths.

The death-by-missile of top Iranian General Qassem Soleimani—who was later identified by a distinctive silver ring on the finger of his severed hand—certainly gave Grand Ayatollah Khamenei something to think about.

He should think hard. Iran’s response over the coming months to this act of U.S. retribution for numerous acts of Iranian aggression could prove disastrous to the Islamic Republic.

Iran is already reeling from crippling U.S.-instigated economic sanctions, anti-government demonstrations turned deadly in its own streets, and debilitating Israeli military attacks on its imperialist assets.

Soleimani’s timely and ignoble death should focus the Iranian kingpin’s attention as never before. If it doesn’t—if he attempts serious retaliation—Iran will deserve the further decimation it receives at the hands of the U.S. and our equally indignant Middle East allies.

Khamenei should already have gotten the message that Iran’s terrorist brand of imperialism is not welcome in the Middle East—especially after some 200 missile strikes by Israel on Iran’s threatening weapons facilities in Syria in recent years and, just last August, on Hezbollah in Beirut, Lebanon.

Let’s not forget that tiny Israel also broke into a nuclear weapons warehouse smack in the center of Iran’s capital, Tehran, and removed thousands of pages of evidence of Iran’s cheating on the terms of the nuclear agreement it had with the U.S. and European Union.

Despite this humiliation, the Ayatollah possesses supreme arrogance and a misplaced sense of invincibility. Following an attack by Iranian-led Shiite militias on the U.S. Embassy in Baghdad, Iraq last week, Khamenei mocked the Americans, saying, “You can’t do anything.”

Nonetheless, Iran has been singularly persistent and successful in its efforts to spread violent Islamic jihad throughout the Middle East—led primarily by none other than Qassem Soleimani.

In short, few terrorists have had more American (or Arab) blood on their hands than Soleimani, and few have deserved such an ignominious fate more than he.

In addition to Soleimani directing his armies of foreign puppets in Lebanon, Iraq, Syria, Yemen and Gaza, Iran has also launched missile assaults on Saudi Arabia’s key oil refinery, attacked and harassed cargo ships in the Gulf of Hormuz and shot down a U.S. drone over the Persian Gulf.

These recent acts, of course, supplement decades of attacks on U.S. forces by Iranians or militias under their control—in which hundreds of Americans were killed in Iraq.

While Soleimani’s loss is a major setback to Iran—among many such lately—the Islamic Republic is still powerful and determined. Its leaders are guided by a religious fervor that is not likely to be much tempered by rational calculations on the balance of power.

In fact, statements coming from Iran’s leadership reflect continued belligerence. Its Information Minister called President Trump “a terrorist in a suit”—ironic, given Iran’s informal mantle as the greatest state sponsor of global terrorism. A Hezbollah spokesperson called for the targeting of U.S. military assets.

In any case, both the U.S. and Israeli militaries are on high alert, expecting Iranian retaliation at some level over the coming months.

When Iran does seek its revenge on either the U.S. or Israel, we can be sure that each will respond respectively with devastating hammer blows—not half measures.

Iran is on the ropes—financially, politically (don’t forget nationwide popular protests over recent months) and militarily. While the country is well armed, Khamenei and Co. surely have limits to how much more credibility and assets they’re willing to throw into battle against the U.S. and Israel—two equally determined and better armed combatants.

Above all, pro-Israel advocates should make the case that if further provoked, both the U.S. and Israel have every reason and right to act firmly against Iran’s bellicose and imperialistic terror regime. We should support such countermeasures, and the U.S. Congress should support them.

After all, Iran has declared itself our enemy—its chants of “death to America,” often led by Ayatollah Khamenei, make that indisputable.

I hope in conversations with friends, family and colleagues, you’ll point out that the U.S. elimination of Qassem Soleimani was entirely justified by the attack on our Baghdad Embassy by his Iranian proxies—it was an act of war.

If Iran attempts to double down with further belligerence in the region—especially against the U.S. or our other allies, including Israel—there should be no discussion of “proportional” response. Iran must now be set back definitively.