FLAME
X
Put text, tables or any other HTML contents here, as you would put in any other HTML page. ..... and more.
Skip to content
Home » Despite vicious attacks on Israel by the media, the U.N. and Islamists, we continue to win!
Arab Authorities Abuse Their Authority on Jerusalem’s Temple Mount _March 26, 2019Jacques Gautreaux2019-03-25T14:51:14-07:00 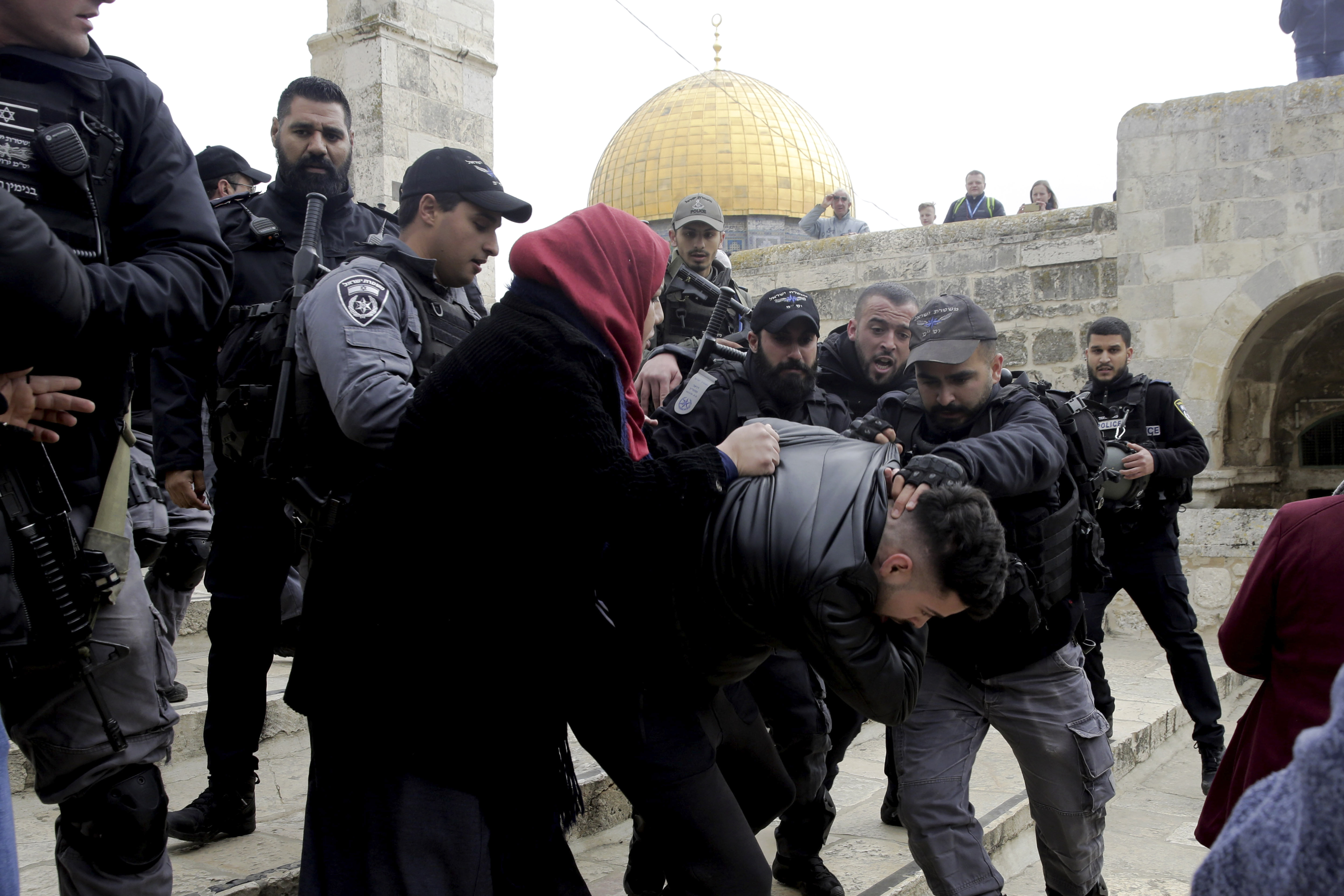 Last week, Jordan took the dramatic step of significantly increasing Palestinian Arab control of the Temple Mount in Jerusalem. As a result, the anti-Semitic policies and anti-Israel activities on the Temple Mount are likely to intensify—if that is even possible.

The Temple Mount was the site of both Solomon’s and Herod’s temples, which were destroyed. After the Arab conquest of Jerusalem in the seventh century, Muslim shrines were erected on the ruins of these Jewish holy places. At the southern end of the massive 35-acre Temple Mount complex—where the ancient Sanhedrin sat—the Al-Aqsa Mosque was constructed. North of that, on the actual spot of the ancient Jewish temples, the golden Dome of the Rock was constructed toward the end of the seventh century.

Yet today, Jews are denied all religious rights on the Temple Mount.

Even under the most austere Muslim regimes of the Middle ages, Jews were permitted to pray on the Temple Mount once a year on Tisha B’Av, the anniversary of the destruction of the temples. But today’s policy—unbelievably tolerated by Israel’s government—is intended, according to Palestinian Authority President Mahmoud Abbas, to prevent Jews from “setting their filthy feet” on the Temple Mount.

Israel is sovereign in all Jerusalem, thanks to the 1980 Basic Law: Jerusalem Capital of Israel. So why is the Temple Mount situation so seemingly out of control?

On June 7, 1967, Israeli General Motti Gur proclaimed “Har Ha-Bayit b’Yadeinu“: “The Temple Mount is in our hands!” Perhaps none of the miracles of the 6-Day War was more surprising than Israel’s conquering the Temple Mount in Jerusalem’s Old City.

Israel’s fight for survival in 1967 was supposed to be with Egypt in the south and with Syria in the north. Israel went to extraordinary lengths to assure Jordan’s King Hussein (in the east) that Israel had no desire to militarily engage Jordan.

But as the war rapidly unfolded, Egypt’s strongman, President Nasser, kept falsely insisting to King Hussein that Egypt was thrashing the IDF and that Jordan should launch an assault on Israel’s heartland.

Nasser’s cynical plan worked, and Hussein made perhaps the greatest misjudgment of his checkered leadership career: he indeed declared war on Israel, and paid dearly for his aggression. The IDF drove Jordanian forces out of Judea and Samaria—which had been re-dubbed the “West Bank” after Jordan’s illegal occupation of the territory following Israel’s War of Independence in 1948-9.

Suddenly, Judea and Samaria were again under Jewish sovereignty. More significantly, Israel’s new territory included “East” Jerusalem, the half of the city which Jordan had seized in 1948. And—most significantly for Jews worldwide—Jerusalem’s Temple Mount was in Israel’s hands.

Enthusiastic Jewish soldiers hoisted Israel’s flag over the gold-coated Dome of the Rock at the middle of the Temple Mount. But it was not to be there for long.

The next day, Israeli General Moshe Dayan had the Israeli flag removed in a gesture of magnanimity and respect for the sacredness of that shrine to Muslims around the world. He further announced that the century-old “Status Quo” would be respected on the Temple Mount, and the Muslim Supreme Council (Waqf in Arabic) would continue its exclusive control over the sacred compound—with Israel only administering security control there.

The Waqf itself is under the control of the Kingdom of Jordan, which appoints its members. Dayan’s move effectively gave the defeated Jordan sole authority over the most crucial and holy site that changed hands in 1967.

Jordan and its Waqf have grotesquely abused Dayan’s magnanimous gesture, and any attempt by Israel to share in the Temple Mount’s administration and policies are vigorously rebuffed by the Islamic authorities. Their fierce defense of their exclusive control often has resulted in riots, violence and even murder.

Israeli leaders over the decades have demurred on many crucial issues regarding the Temple Mount in order to avoid religiously fueled violence and popular uprisings by Palestinian Muslims. But this has only emboldened its adversaries.

Although the Status Quo—enacted by the nineteenth-century Ottoman Empire, and perpetuated by the British during the Mandate period—calls for freedom of worship at religious holy sites, Jews are not permitted to pray on the Temple Mount. They may not even bring a Bible or pray silently in the compound.

If a Jew violates this Waqf policy, Israeli security staff on the Temple Mount whisks the “criminal” away to jail—assuming that Muslim authorities don’t get their hands on the perpetrator first.

In short—and with ultimate irony—the only place in Israel where Jews may not practice their religion freely is on the Temple Mount.

The Muslim Waqf is, in fact, doing many things that violate the Status Quo.

The Status Quo does not permit holy places to be used as armories for vast amounts of weapons and ammunition. Yet the Al-Aqsa mosque and other locations on the Temple Mount have harbored massive caches of weaponry. Two years ago, some of these weapons were used to murder Israeli policemen on security duty on the Temple Mount. Last week, a Molotov cocktail was tossed into the Israeli guard shack.

The Status Quo does not allow terrorists at a holy site to rain rocks and other debris on Jewish worshippers at the Western Wall below the Temple Mount. This became an annual rite on Sukkot during the so-called Al Aqsa Intifada, and continues on an occasional basis today.

The Status Quo does not permit the unsupervised excavation of a priceless archeological site, with tons of material—including priceless first and second-temple relics—dumped in the valley just east of the Temple Mount. Yet this is precisely what the Waqf has done from the 1990s to today in order to create a massive new underground mosque in the area known as Solomon’s Stables. Even more damage was done by digging a network of deep trenches for new electrical services on the Mount.

The Status Quo does not permit the use of a religious site for the planning and execution of terror attacks. Yet this is what the Waqf facilitated on the Temple Mount in a structure near the Golden (or Mercy) gate at the northeast corner of the compound. Hamas used this as a base of operations until 1993, when Israel finally moved in and locked the building. Last week, Waqf-inspired rioters ripped the locks off the building so its usage could be restored.

Both the Israeli court system and the government have bent over backwards to avoid confrontation with the Muslim Waqf. Although as recently as 1954 the Waqf itself acknowledged that the site originally marked the spot of the ancient Jewish temples, they—inspired by Palestinian nationalism—began to deny the validity of Jewish claims to a heritage on the Temple Mount. Yassir Arafat famously stunned President Bill Clinton at Camp David in 2000 by asserting that the Jews never had a temple in Jerusalem.

The Waqf has followed suit, denying the Jews any claim to a past that includes the Temple Mount. Now, with the Jordanian-inspired expansion of the Waqf from 11 to 18 members—with all the new members being Palestinian Arabs—the leadership on Temple Mount initiatives and issues promises to be even more confrontational and more political than ever. Its willingness to even discuss important matters of security and policy regarding the Temple Mount will be dramatically diminished.

In talking with friends, family and colleagues, I urge you to tell them about the critical issues regarding the Temple Mount. Share with them the outrageous suspension of Jewish religious rights at Judaism’s holiest site . Urge them to communicate in the strongest terms to both American and Israeli political and religious leadership that this situation requires forceful intervention before the newfound Palestinian muscle at this religious site results in even greater violence and more aggressive anti-Semitism. Israel’s government must fight back, and America should support Israel’s efforts to restore sanity and peace at this beloved site.