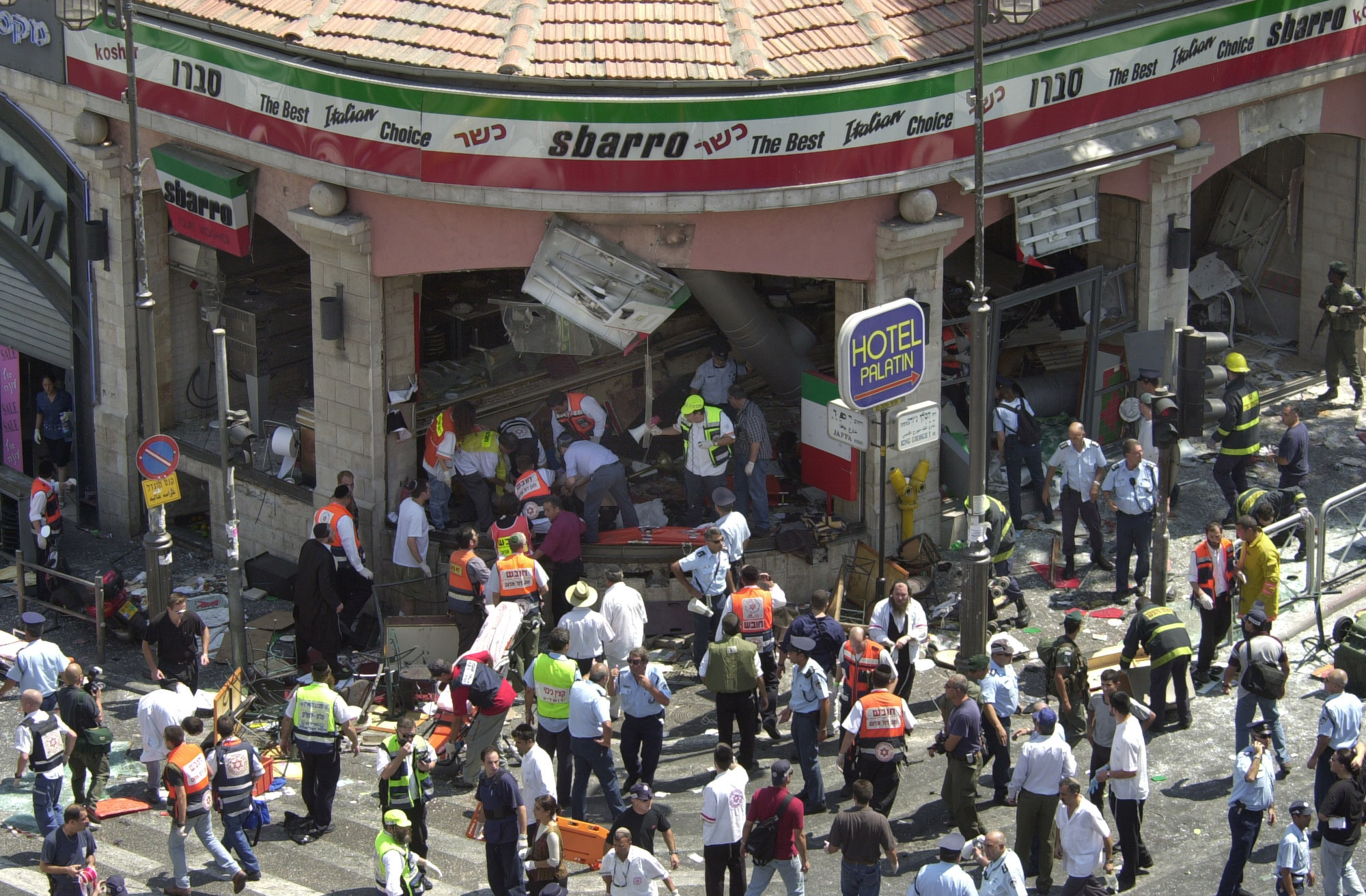 The bombed ruins of Sbarro pizzeria in Jerusalem, where dozens of Jewish civilians were killed or maimed in August 2001 by Hamas terrorists during the Second Intifada, symbolizes the failure of the Oslo Accords.

25 Years after the Oslo Accords: Why Did They Fail to Create Peace between Israel and the Palestinians?

Some diplomatic efforts fail—like the ill-fated Oslo Accords—because of dramatic changes in one or more of the parties. On the 25th anniversary of Oslo, the situation in Israel, Judea-Samaria (the West Bank) and Gaza remains volatile, hostile and dangerous, primarily because one of the parties—the intractable Palestinian leadership—has changed not a bit.

After Oslo, the Israelis, Palestinian Arabs and the whole world waited for the widespread peace that would envelop the Middle East and, by the now-discredited theory of linkage, bring peace to the world’s peoples, everywhere. In addition, if the world’s most intractable dispute could have a peaceful resolution, pundits reasoned, what problem could not similarly be resolved?

Instead, to the contrary, Israelis—despite their economic and social successes—remain under siege in a perpetual state of war and terror. Palestinian Arabs’ lives—while enormously improved economically—remain bitter, with little hope for improvement of their prospects. As for the world, shall we just say that neither Oslo or the Arab Spring has caused the Middle East or any part of the globe to become a sea of tranquility and amity?

So, what happened after Oslo? Sadly, in the most fundamental sense—and where it counted the most—virtually nothing has happened yet.

The first problem is that the mythology that surrounded—and surrounds—Oslo has overwhelmed the actual deal that was made. If we want to break free of Oslo’s failure—and chart a new course—we must first understand the deal’s original goals.

Under Oslo, Israel was ultimately to divide the contested territories into three areas, with the PA given civil and policing powers over the vast majority of the territories and 97% of the Palestinian Arab population . Most other issues were deferred for negotiations over the following five years.

The most critical issues—the status of Jerusalem and refugees, and even the eventual creation of a Palestinian state—were deferred to a nebulous “final status” deal.

But, some things even more important were not deferred: The need for confidence-building moves and a real pursuit of policies conducive to making peace. It was clear then that the insecurity and distrust between the two signatories—and their populations—required diligent efforts by both sides to establish good-will and trust between them.

Despite some admirable security-sharing duties between Israel and the Palestinian Authority, this did not create sufficient confidence between the parties to resolve the most “important” issues. Particularly damaging to trust was the brutal terror of the Palestinian Second Intifada, which murdered over a thousand innocent Israelis.

With the terrorism-rooted PLO in charge of the PA, the PA-administered territories became hotbeds of murder and mayhem. As National Review‘s Kevin Williamson recently noted:

“And war is war: there were 169 Palestinian suicide attacks between 1993 and 2016, targeting shopping malls, bus depots, the streets of downtown Jerusalem. In 2014, there were 4,500 rocket and mortar attacks on Israelis. The Palestinians still proudly celebrate their stunning military victory over a pregnant woman, seven children, and five other civilians eating pizza at the Battle of Sbarro.”

In this week’s featured FLAME Hotline article (see below), syndicated columnist Amir Taheri, an Iranian pre-1979 publisher, describes the underlying mythology of the “Oslo Accords” and the “Oslo Peace Process.” His points help pro-Israel advocates understand the dubious Palestinian motives for signing the Accords—and why peace still depends on their actually, finally, wanting and accepting peace with the Jewish state.

I hope you’ll forward this article to friends, family and fellow congregants to help them understand why the Oslo Accords’ one true goal—the creation of a peace-making and confidence-building atmosphere in order to tackle the hard problems of making peace—was thoroughly subverted by Arafat and his successors in both the PA and Hamas.

I hope you’ll also quickly visit FLAME’s lively new Facebook page and review the P.S. immediately below, which describes FLAME’s recent hasbarah campaign exposing another source of Palestinian failure—their dueling dictatorships in Gaza and the West Bank. I hope you agree with and will support this message.

A Silver Jubilee for False Promises

Yesterday marked the silver jubilee of an event that at the time it happened was hailed by some as a landmark in the use of diplomacy to achieve peace.

If you wonder what we are talking about, don’t worry. Few people remember the event and most of those who do pretend not to remember. We are talking of the so-called Oslo Accords shaped between Israel and the Palestine Liberation Organization chief Yasser Arafat in secret negotiations in the Norwegian capital.

At the time, the accord was marketed as the home-run to a solution of the “Palestinian problem” that had haunted the Middle East and generated much violence and many wars for decades. The excitement the “accord” created was so intense that a few weeks later it led to Nobel Peace Prizes for the trio that concocted it: Israeli leaders Yitzhak Rabin and Shimon Peres, and the PLO chief Arafat.

Right from the start, however, the true nature of the “accord” was either kept partly secret or hyped beyond limits of diplomatic double-talk. The Palestinians and their supporters in the West claimed that “Oslo”, as the accord came to be known in shorthand, was a first step towards the creation of a Palestinian state. They chose to ignore Rabin’s repeated statements about a Palestinian “entity short of a state that will independently run the lives of the Palestinians under its control”.

Even Peres, who got carried away into a romantic muddle of thinking that he and Arafat could create a “new Middle East” of peace and prosperity, a delusional version of Theodor Herzl’s “Altneuland” (New-Old Country), didn’t talk of a two-state solution. He excluded a purely Palestinian state; instead, he promoted a Jordanian-Palestinian state, an idea he tried to sell to Americans and Egyptians without success.

There was also deception on the other side.

As early as 1988 at a press conference, Arafat had promised to recognize the right of Israel to exist as a state. After “Oslo”, however, he took no steps to transform that promise into political reality. To those who visited him after he had been installed as head of the Palestinian Authority, he played his old tune about a Palestine from “the river to the sea.”

Arafat made it clear that he saw “Oslo” as a transient phase in a long-term campaign to eliminate Israel. When pressed, he would say he accepted the United Nations’ Security Council Resolution 224 which recommends talks between Israel and Arab neighbors to resolve their territorial disputes and make peace.

At the time “Oslo” was unveiled some of us wondered about hidden reasons that produced it. The first reason that came to mind was that “Oslo” was designed to save Arafat from irrelevance.

Arafat had lost much of his credibility with Arab and Islamic states first by siding with the mullahs of Tehran in 1979 and then by hanging to Saddam Hussein’s coat-tail during the invasion of Kuwait. Arafat was running short of money as his latest benefactor Saddam Hussein’s finances were squeezed as a result of sanctions imposed in 1991.

Without diplomatic support and without money, Arafat would be no more than a shadowy figure languishing in Tunisia.

His downward slide had been accelerated by the Madrid Peace Conference in which “real Palestinians”, that is to say, people who lived in the West Bank and Gaza, fielded an alternative leadership that quickly won respect and admiration across the world.

Unlike Arafat who was notorious for a career of violence , including attempts at destroying Jordan and plunging Lebanon into civil war, not to mention countless acts of terror in a dozen countries, the Palestinian delegation in Madrid established itself as a voice of reason and compassion. Haidar Abdul-Shafi, Hanan Ashrawi and Faisal al-Husseini, who had remained inside, did look like people who genuinely desired peace because they were directly affected in their personal lives.

Thus one undeclared aim of “Oslo” may have been to destroy the “Madrid” figures and re-impose Arafat’s hold on the Palestinian “cause.”

Another reason may have been the failure of part of the Israeli leadership to consider the possibility of peace with Syria at a time that the US, having flushed Saddam Hussein out of Kuwait, had established itself as the arbiter of things in the region.

At the time one heard echoes of feelers put out by Syrian President Hafez Al-Assad who promised Israel peace not only with Syria but also with Lebanon which was under his occupation. There is evidence that Rabin was initially tempted by the Syrian feelers. However, it seems that some in the Israeli leadership felt that giving up even part of the Golan Heights was too risky while giving Arafat an office in the West Bank would keep him in a cage.

In choosing the path to “Oslo” the Israel leadership ignored a key lesson of the state’s founding father David Ben Gurion who insisted that the solution to the “Palestinian problem” had to start with peace with Arab neighbors. For without such peace, he argued, any Arab state could manipulate the Palestinians for its own ends.

“Oslo” not only did not envisage the creation of a Palestinian state but may have even postponed it indefinitely. It created a new status quo in which those with guns and money on the Palestinian side felt comfortable while the Israeli side could also avoid contemplating the longer-term prospects of an unstable situation.

Ironically, the two-state idea has morphed into a cliché, especially for anyone running out of ideas as to how to deal with what Tony Blair once described as “the most difficult problem in the world.”

Since “Oslo”, with the exception of Rabin, all Israeli prime ministers, that is to say, Peres, Ehud Barak, Ariel Sharon, Ehud Olmert and Benjamin Netanyahu have endorsed the “two-state” formula. The official Palestinian side has been more ambiguous on the subject, and, in the case of Hamas, hostile to the idea. It was only during the premiership of Salam Fayad that the Palestinians Authority came close to genuinely adopting the two-state formula as the basis for its strategy.

Even if one does not believe that “Oslo” was still-born , it should be clear by now that the scheme is now all but dead.

A quarter of a century later, we are left with a status quo that, though far from ideal, seems stable and the flickering hope of a new deal brokered by the US. In both cases, contrary to common perceptions, it is the Palestinians, weak and divided though they are, who will have to make a choice.