FLAME
X
Put text, tables or any other HTML contents here, as you would put in any other HTML page. ..... and more.
Skip to content
Home » New opportunity opens for the Palestinians: Will they seize peace and prosperity . . . or let it slip away again?
Will friendships between Israel and African nations quash the automatic majority against the Jewish state in the UN?Jacques Gautreaux2020-09-20T19:34:49-07:00 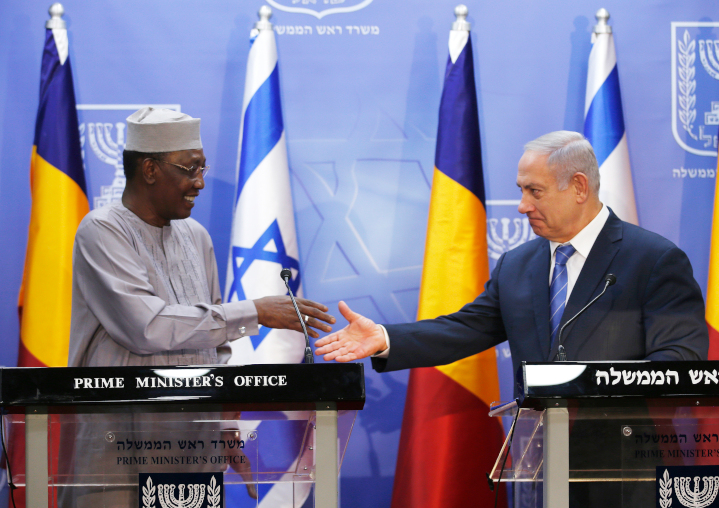 Israeli Prime Minister Benjamin Netanyahu, right, greets President of Chad Idriss Deby in Jerusalem last November. This was the first-ever visit of a president of Chad, which broke off relations with Israel in 1972. Chad, as well as African neighbor Malawi, recently announced plans to open diplomatic missions in Jerusalem.

Will friendships between Israel and African nations quash the “automatic majority” against the Jewish state in the UN?

With the excitement and historic nature of the Abraham Accords, recently signed on the White House lawn, the growing intimacy between African nations and the State of Israel has gone largely unnoticed.

But connections to African neighbors can play a huge role in helping reduce the abuse heaped on Israel in international forums, forging peace in the region and elevating Israel’s deserved status as a world leader.

Both Chad and Malawi have stated in recent weeks they are ready to open diplomatic missions in Jerusalem. Formal relations with Sudan look to be only a matter of time, especially after Prime Minister Benjamin Netanyahu met with chief of Sudan’s Sovereignty Council, Abdel Fattah al-Burhan, earlier in the year.

This is significant because Africa was always considered very much a part of the bloc of nations that would automatically vote against Israel in international institutions and were reticent to be seen as growing too close to the Jewish state.

This was largely a result of threats over oil and trade, and the power of the bloc of 57 Islamic nations and the bloc of 22 Arab nations that dominate the Non-Aligned Movement (NAM) of developing countries at the United Nations. The coalition gave Islamic nations an “automatic majority” in the NAM, which itself has the majority of member states at the UN and other international institutions.

Israel and African nations held good relations during the 1950s and 1960s based on a shared fate—both threw off colonialism to reestablish independence.

Israel and sub-Saharan Africa had similar challenges with increasing desertification and a lack of water resources. The young State of Israel was among the first countries to extend substantial assistance to the newly independent countries and their liberated peoples.

Israel’s aid was provided in fields from agriculture, medicine and defense to infrastructure projects, such as the construction of airports, the establishment of shipping companies, and educational and professional training institutions.

This ended in 1973 when the Organization of African Unity (OAU) begrudgingly bowed to Arab pressure during the oil crisis of 1973. For the next few decades, African nations were manipulated to become a major source of antagonism toward Israel in multiple international institutions, like the United Nations, where the Non-Aligned Movement of developing countries could guarantee passage of any anti-Israel resolution.

Since that time, the most notable commodities Arabs have exported to sub-Saharan Africa have been terrorism, Jihad and Islamism. Terrorist groups like Boko Haram, Al Shabaab and other offshoots of Al Qaeda and ISIS have cost thousands of African lives. These groups remain a constant threat to sovereign nations in East, West and Southern Africa.

However, Israeli intelligence, experience and knowledge have played pivotal roles in ensuring greater security for African nations, and have thwarted many potentially deadly attacks.

In addition, the Israeli government, through its international aid and development agency, MASHAV, has been helping African governments and people to find solutions for the challenges of water scarcity and food security through advances in Agritech (agricultural technology), Foodtech (food technology) and Watech (water technology). Israeli experts are at the forefront of providing electricity to rural villages through solar power, desalination to arid countries and ensuring food grown locally has a longer lasting shelf-life.

These blossoming ties have improved diplomatic relations, with African representatives expanding their missions in Israel, attending numerous Israeli tech events and starting to side with Israel in the international arena. In recent years, numerous African nations have voted with Israel or at least abstained on resolutions against the Jewish state that they would previously have supported instantly.

During the annual Israel-hate fest held every year— “International Day of Solidarity with the Palestinian People”— many African nations changed their votes in favor to an abstention or against, including Cameroon, Nigeria and Rwanda.

As increasing numbers of Africans are beginning to understand—based on shared roots, mutual interests and growth of Evangelical Christianity—the State of Israel is not just an ally, but a beloved nation. In Kenya, presidential candidates fight over each other about who is more pro-Israel, and one visits the Kotel on the eve of elections. In Zimbabwe, one of the presidential candidates is pictured wearing a Jewish prayer shawl and makes opening of an embassy a core election promise. Many African leaders talk of the fraternal bonds between the Jewish and African peoples.

In recent years, standing against Palestinian diplomatic bullying tactics, African nations have begun to realize that Israel is a committed and reliable ally in the battle against the effects of climate change and terrorism, and can help these countries progress and develop.

The friendship between Israel and Africa is also starting to remove a major weapon in the Palestinian arsenal—the automatic majority against Israel in international forums and the BDS movement.

During Israel’s early years, when it was constantly attacked militarily, economically and diplomatically, it created the Alliance of the Periphery. This strategy called for Israel to develop strong ties with nations beyond the Arab bloc, such as in sub-Saharan Africa. With Israel no longer at war with many of its neighbors and the Arab League Boycott all but ended, the diplomatic war on Israel is all that remains. Now, with its extensive achievements in Africa, this final pillar of Palestinian rejectionist strategy is being dismantled.

I hope you’ll help friends, family, colleagues and your elected representatives understand that while the automatic majority remains at the UN for now, it is being steadily eroded as a result of the impotence of Palestinian threats, the rejectionist bloc slowly losing power and successful Israeli diplomatic achievements.

Most importantly, be sure to emphasize that Africa is steadily moving away from the Palestinians and their maximalist positions, and one by one its 54 nations are moving to support and collaborate with Israel.