FLAME
X
Put text, tables or any other HTML contents here, as you would put in any other HTML page. ..... and more.
Skip to content
Home » New opportunity opens for the Palestinians: Will they seize peace and prosperity . . . or let it slip away again?
Why the assassination of Iran’s nuclear weapons czar was legal and justifiedJacques Gautreaux2020-12-07T10:27:07-07:00 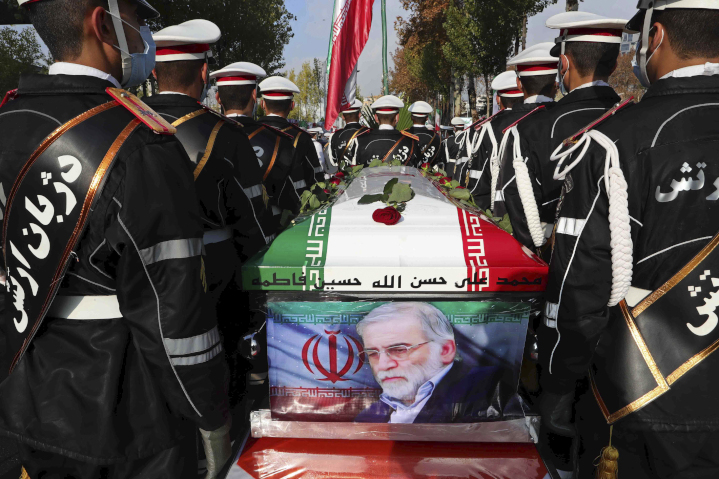 Military funeral for Mohsen Fakhrizadeh, brigadier general in Iran’s Islamic Revolutionary Guard Corps (IRGC) and “father of Iran’s nuclear bomb,” who was assassinated near Tehran by unknown assailants. Fakhrizadeh was under U.S. sanctions for his both his roles.

The audacious assassination of Iran’s top nuclear weapons chief, Mohsen Fakhrizadeh, just north of Tehran, drew criticism from mainstream media and some politicians, both in the U.S. and abroad. But their objections are misplaced—even perverse—given Fakhrizadeh’s prominent role in the Islamic Republic’s efforts to threaten its neighbors in the Middle East and globally.

Nonetheless, the European Union condemned the assassination as “a criminal act [that] runs counter to the principle of respect for human rights.” The far-Left group J Street claimed it was meant to sabotage diplomacy. Some blamed Israel or the U.S., while many assumed it could be a combination of both, because it was a well-executed operation deep in the heart of enemy territory.

The debate centers on whether the assassination was justified, reasonable or legal. Countless news articles or obituaries disingenuously referred to Fakhrizadeh as a “nuclear scientist” with little or no background about his role in the potential creation of weapons of mass destruction for a nation that has long aspired to wipe Israel off the map. NPR reported that “according to U.S. intelligence reports” Fakhrizadeh had not been involved in nuclear weapons development for at least 10 years.

Let’s look at the facts.

Fakhrizadeh was no mere scientist. He was a brigadier general in the Islamic Revolutionary Guard Corps (IRGC), which, according to the Iranian constitution, is intended to protect the Islamic Republic’s political system. In other words, the IRGC exists solely to protect the Mullahcracy and repress the Iranian people who seek freedom and rights. It has been designated as a terrorist organization by the U.S., Saudi Arabia and Bahrain, and has been involved in terrorist activities in Iraq, Syria and Lebanon, and it actively assists two other terrorist organizations—Hezbollah and Hamas.

Fakhrizadeh headed the important Organization of Defensive Innovation and Research of the Iranian Ministry of Defense, which conducted clandestine nuclear weapons research. He is known as the “father of Iran’s nuclear bomb.” His covert department’s sole responsibility is to create nuclear weapons capability for a nation that openly calls to destroy the State of Israel. In other words, Fakhrizadeh is a key accomplice in the attempted commission of genocide, which itself is illegal under international law.

Fakhrizadeh has been sanctioned by the United States since 2008 for his work on Iran’s nuclear program. Israeli Prime Minister Netanyahu named him specifically when revealing the trove of nuclear weapons plans Israel seized from a Tehran warehouse in 2018.

Nor is Iran a stranger to assassinations. According to the United States Institute for Peace’s “Iran Primer,” Iran has assassinated dozens of its enemies across four continents, in Asia, Europe, North America and South America, over the four decades since the 1979 revolution. It was actively involved in 59 attacks, which resulted in the death of hundreds of innocent people, including hundreds of Americans.

The Quds Force, the elite wing of the IRGC that operates outside Iran, has been behind most of the murders. Its regular targeting of foreign officials and diplomats all over the world amply demonstrates that the Islamic Republic has no qualms about using violence, bloodshed and murder to further its aims.

What’s more, legitimate targeted assassinations and killings have long been a tool in warfare by many nations. If someone is planning a way to harm your nation, it is expected that they could be subject to a premeditated attack. It is absurd that a nation cannot conduct an operation of self-defense against someone planning an attack.

The traditional definition of the right of self-defense in customary international law occurs in the “Caroline Case.” The case found that there must exist “a necessity of self-defense, instant overwhelming, leaving no choice of means, and no moment for deliberation.” This principle later became accepted as part of customary international law. To stop the building of a nuclear weapons by a nation that has openly stated its intention to use them certainly falls under that category.

Indeed, most nations at war use this tactic regularly. During the Second World War, the U.S. regularly targeted those involved in the enemy’s military campaign, including Isoroku Yamamoto, the senior planner of the attack on Pearl Harbor.

One week after 9/11, the U.S. Congress passed the Authorization for Use of Military Force Against Terrorists (AUMF) which allowed for drone strikes against enemy targets. These have been used by all administrations since. These types of actions are also used by many governments around the world, including the UK, France and Russia.

The killing of Fakhrizadeh was not akin to a political assassination. He was the leader of a military organization known for its ties to murder, terrorism and repression of the Iranian people. He was the head of a department in the Defense Ministry working on acquiring nuclear weapons capability. That act alone is contrary to international law, and his role in the attempted commission of genocide is a war crime.

The fact that the very incitement to genocide is an international war crime—as opposed to most war crimes, which are active —is because we dare not wait for someone to actually carry out the mass murder of a people or nation. So, if inciting to genocide is a war crime, then surely creating the means to carry it out is far worse.

I hope you’ll point out to friends, family, colleagues and your elected representatives that the killing of Fakhrizadeh meets the criteria of a legitimate target under international law. Iran is considered in a state of hostilities with U.S., Israel, and many of its direct neighbors. He was in no way a civilian and was actively involved in the theater of war and the use of deadly force against civilians. His death clearly minimizes the harm to civilians.

Those who claim that this creator of weapons of mass destruction was not given a fair trial overlook the undeniable facts that Fakhrizadeh’s career has been stained with blood and murder, and Iran is a state actor that falls well outside the norms of international relations.

Fakhrizadeh was not just another cog in the machine, but the apex of the Islamic Republic of Iran’s state-sanctioned murder and regional hegemony schemes. The fact that he no longer walks the earth aids the cause of peace and stability, and has probably saved countless lives in the process.