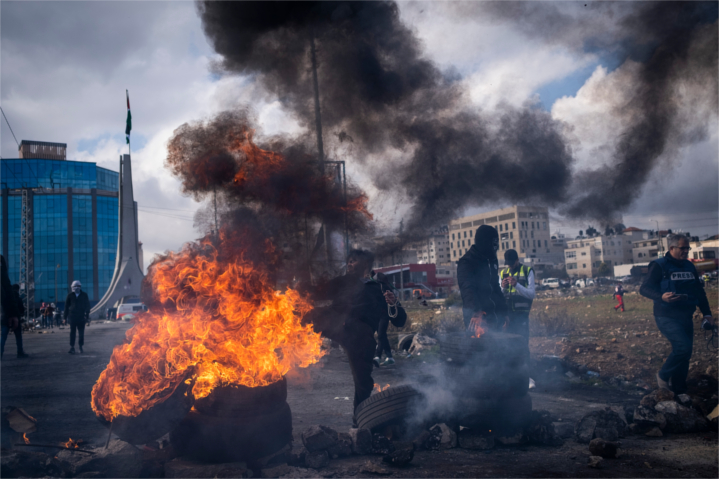 Palestinian protesters in Ramallah mark the latest American peace initiative pretty much the same way they celebrated the previous four peace initiatives. But this time: “Who cares?”

Who Cares About Palestinian Rejectionism?

Last month, President Trump issued his long-awaited “Deal of the Century” Peace Plan for the Middle East. Both Prime Minister Netanyahu and his electoral opponent Gen. (ret) Benny Gantz were at the White House for the announcement. So were a bunch of international diplomats, including three from Arab nations. The Palestinians refused to attend the unveiling of the plan, and firmly rejected it sight-unseen.

The proper question at this point about Palestinian rejectionism ought to be: “Who cares?”

Anyone surveying the history of Israeli-Palestinian relations already knows that the Palestinians’ goal is the eradication of Israel. The difference in the new plan, however, is that the initial major steps in its implementation can be done unilaterally by Israel , even with no Palestinian participation.

Having refused four major peace initiatives in the past 25 years, the Palestinians are well-schooled in rejectionism. Each of those earlier plans—starting with the Clinton initiative in 2000—would have given them a state roughly corresponding to the original 1949 armistice lines from Israel’s War of Independence.

But the Palestinians’ many “unconditional” demands—like the right of return for 5-7 million Arab refugees and their descendants to Israel proper—created built-in excuses for walking away from the table. The new plan explicitly rules out this refugee demand.

This time, the Palestinian leadership didn’t even walk up to the table, having severed all relations with the United States in 2017 over America’s recognition of Jerusalem as the Jewish capital. Similarly, other than some security and bureaucratic coordination with Israel, they have refused all bilateral negotiations with Netanyahu and his government.

But their latest rejectionism could very well do them in, once and for all. In prior negotiations, the U.S. would strong-arm Israel to make concessions to PA President Mahmoud Abbas and his predecessor, Yassir Arafat. The Palestinian leadership would then pocket those concessions, and use them as the new baseline in future peace negotiations with Israel.

Happily, that half-century-old (losing) diplomatic strategy of Israeli concessions has been abandoned by President Trump. Indeed, the new peace plan specifies a future Palestinian state located in the disputed territories, but rejects the idea that the 1949 armistice lines are relevant to the current day .

The offered Palestinian state—under the new plan—would occupy about 70% of Judea and Samaria (aka The West Bank). The remaining 30% would be annexed by Israel—importantly including the length of the Jordan River Valley, which would at last give Israel a formal, defensible border with the Kingdom of Jordan .

The entirely contiguous Palestinian state would be contained inside Israel’s borders, and Israel would enforce border control. This is vital, to prevent the nascent demilitarized state from becoming an arms-and-terrorists armory like the Gaza Strip is now.

And, by the way, the new State of Palestine will receive a $50 billion baby-gift from international donors, including America.

Characteristically, Abbas and Company have rejected any interest in massive benefits for the Palestinian people—including statehood—if Israel also derives benefits from an agreement.

An Israeli-American team will draw up the detailed maps of areas to come under Israeli sovereignty in the coming weeks. All Israeli settlements will be included in the annexation, and all Palestinian cities, villages and farms will be set aside for the new Palestinian state. To give the Palestinians time to reconsider and get over their absolute rejectionism, no Israeli construction will take place for four years on the proposed State of Palestine’s lands.

The Palestinians—and their allies—can scream all they want to the Security Council, but the United States will veto any and all restraining resolutions targeting Israel.

Arab countries, who once would have thrown a fit over Trump’s plan, have actually issued moderate statements, encouraging everyone—including their Palestinian brethren—to explore possibilities under the plan.

Many of these erstwhile fanatical supporters of “the Palestinian Cause” seem to have calibrated their reactions, as they ask “Who cares what the rejectionist Palestinians say, yet again? We need to worry about Iran, our own internal domestic stability, and so many other things.”

The Palestinians have spent decades overplaying their hand—through intransigent negotiating position, violations of pacts and, of course, terror and death. The world seems to be catching on to their lethal game, and we can expect more “Who cares?” shrugs as the Trump plan moves into implementation in the coming weeks and months.

As to whether Abbas and his cronies get around to actually creating a State of Palestine— although handed to them on a silver platter loaded with gold—a valid response would likewise be “Who cares?”

In discussions with friends, families and colleagues, emphasize that Israel’s security is far more assured under the new American plan, and that a new path for the Middle East has been launched that can at last bring peace and stability to that troubled part of the world.

In addition, I hope you’ll also take a minute, while you have this material front and center, to visit FLAME’s lively new Facebook page and review the P.S. immediately below. It describes FLAME’s new hasbarah campaign—outspokenly questioning the validity and wisdom of the so-called two-state solution. Perhaps the Trump proposal can make it more valid and wise.